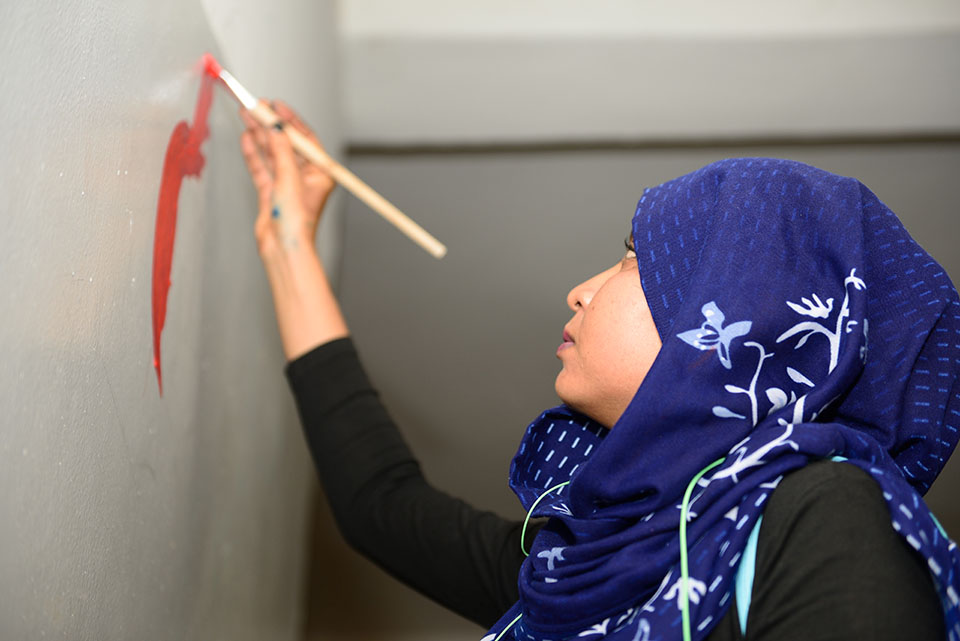 Building on these words by Nelson Mandela, UN Volunteers celebrated Mandela Day 2016 in Sudan by trying to improve life for kids in the Jaffar Ebn Aouf Pediatric Hospital in Khartoum.

“We can change the world and make it a better place. It is in your hands to make a difference”. Building on these words by Nelson Mandela, UN Volunteers celebrated Mandela Day 2016 in Sudan by trying to improve life for kids in the Jaffar Ebn Aouf Pediatric Hospital in Khartoum.

They spent the day painting the walls, installing a plastic carpet on the floor, and putting together small chairs and tables, shelves for children’s books, games, pencils and notebooks. They helped in redecorating some wards in the hospital as well. “If one person stands up, there will be two, and there will be more, and everyone will stand up to make an effort and to effect real change,” said Zahra Sadegi, one of the UN Volunteers who participated in the activity.

The UNV Field Unit in Sudan mobilized UNDP and UN Women staff to contribute towards the activity, and collected donations which the UN Volunteers used to buy toys and treats for children being admitted to the hospital.

“Seeing the smiles of the kids after receiving the toys delivered is the best reward we could have for trying to alleviate their suffering,” said UN Volunteer Daniel González. “We volunteer and dedicate our time for the sake of offering some happiness, but what we get back is way greater.” The idea is also that, in the future, volunteers can help organize activities for kids in the hospital’s recreation area.

The Day was celebrated in the presence of H.E.S. Francis Moloi, Ambassador of South Africa in Sudan, Mr. Abdel-Rahman Ghandour, UNDP Deputy Country Director, staff of the Embassy of South Africa, and the Khartoum State Minister of Health.

The activity was sponsored by MTN Sudan Telco. During his presidency in South Africa, Nelson Mandela was a strong advocate for public health.

Among his initiatives was the establishment of a train route to the countryside to provide free health care to those in need, the inclusion of the right of access to health care in the South African Constitution, and the advocacy for HIV/AIDS prevention in the country.