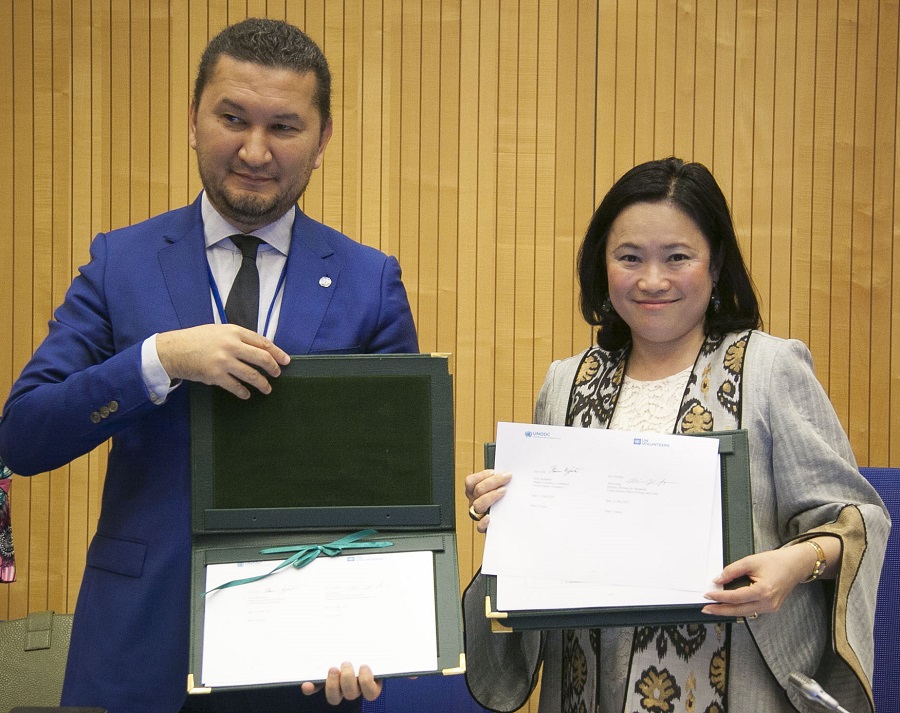 Toily Kurbanov, UNV Deputy Executive Coordinator, and Miwa Kato, Director of the Division for Operations of UNODC, sign joint Action Plan to strengthen the partnership between the two organizations and mobilize more UN Volunteers to contribute to crime prevention and justice.
UNODC, 2019

In the last ten years, over 150 UN Volunteers have served with the United Nations Office on Drugs and Crime (UNODC), with the largest number serving in West and Central Africa to fight terrorism, illicit drugs and transnational organized crime, particularly in the Sahel region where various armed groups have intensified their terrorist activities since 2010.

In Niger, in response to an urgent call for assistance in dealing with an overwhelming number of suspects detained on terrorism charges, UNODC recruited and trained ten lawyers as national UN volunteers to assist in improving access to justice and providing legal assistance to detainees associated with Boko Haram or affiliated to the Islamic State.

Today, at UNODC’s Commission on Crime Prevention and Criminal Justice, UNV Deputy Executive Coordinator Toily Kurbanov spoke about the partnership between UNV and UNODC in West and Central Africa, and of how volunteering is helping strengthen the judicial system and prevent terrorism in Niger.

In 2017, over 1,500 people – including women, children and mentally disabled persons – were in pre-trial detention in Niger, often lacking the necessary resources to seek legal assistance. To ensure that the basic human rights of all detainees were respected, UN Volunteers visited prisons and interviewed detainees to ensure the lawfulness of their detention and treatment, guided them on legal procedures to follow, and made them aware of their rights.

The detainees whose cases could not be legally sustained were released, and those who had a case were tried, leading to the release from detention of many, including women and children. At the prison of Niamey alone, a UN Volunteer helped release 20 out of 35 detained minors.

Thinking of the tragedy, the human suffering, the superheroes, and the huge efforts needed for justice to prevail in the end, I congratulate the Government of Niger, our UNODC colleagues and the UN Volunteers on the ground for the results achieved," said UNV Deputy Executive Coordinator Toily Kurbanov.

When the UN Volunteers started providing legal aid to women and men held in pre-trial detention in 2017, there were 1,600 people arrested and in jail on terrorism charges. In January 2019, there were 842.

Legal advice and support to national institutions in reviewing backlog cases of detainees is a persistent need on the African continent. The successful collaboration between UNODC and UNV in Niger is an inspirational experience that can be applied elsewhere as well. UN Volunteers come with a strong motivation to contribute, learn and achieve results, and their vast potential should be tapped into across Africa and beyond.

To further solidify ties between the two organizations and build on the results achieved thus far, UNV and UNODC today signed a joint Action Plan to strengthen their partnership and enhance mutual collaboration to mobilize more committed UN Volunteers who can make a difference in the lives of the most vulnerable around the world.

The joint Action Plan will help us institutionalize the partnership and set out ambitious priorities. This is the least we can do for our colleagues in the field and for the Member States whom we serve." -- UNV Deputy Executive Coordinator Toily Kurbanov.

UNV has supported UNODC for close to two decades in over 20 countries, including Senegal, Niger, Bolivia, Kenya and, since 2018, also at UNODC headquarters in Vienna, Austria.