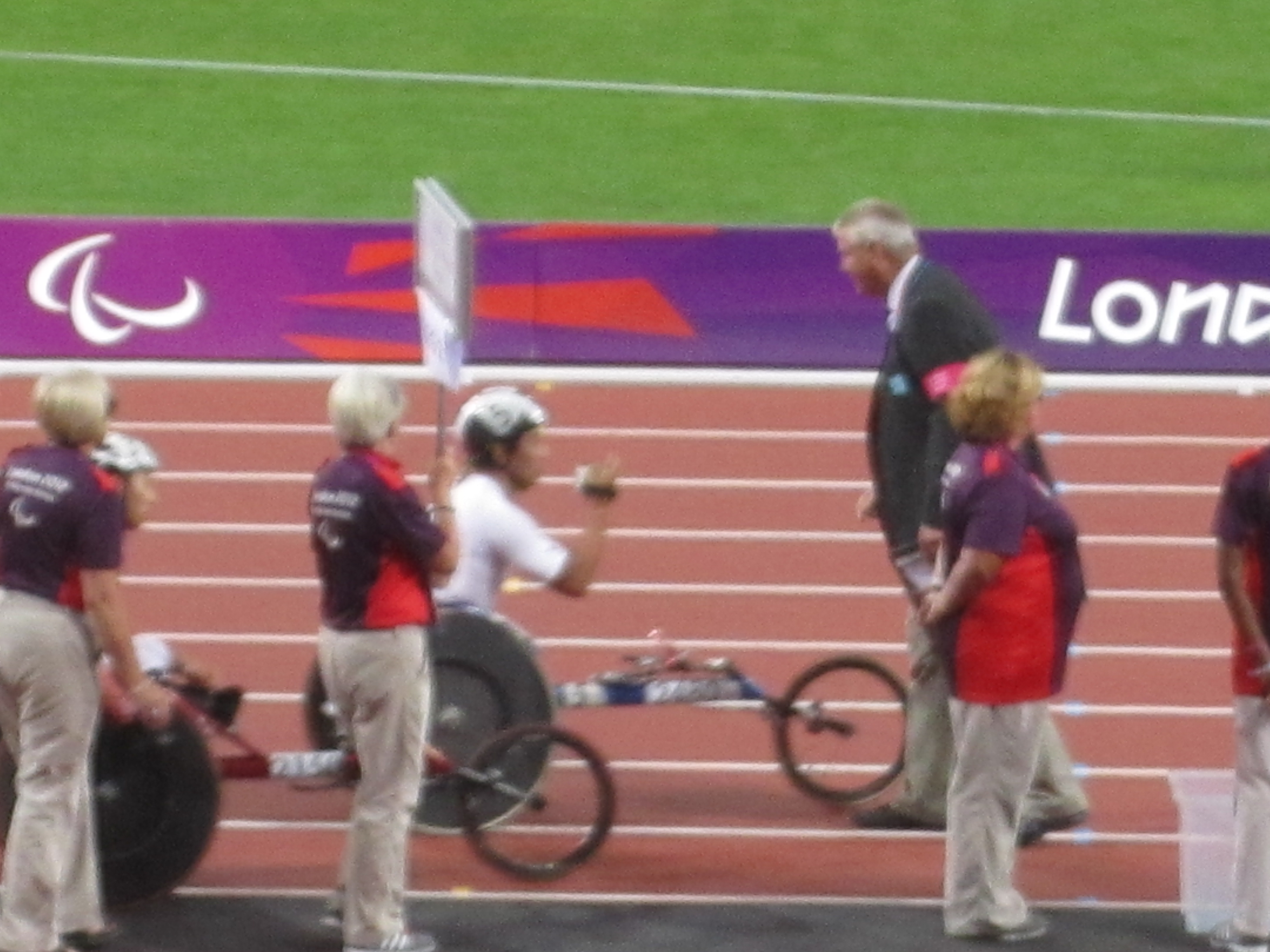 The 70,000 volunteers who served the London 2012 Paralympic Games, included persons with disabilities.  In their trademark purple t-shirts, they helped athletes on and off the sports fields and visitors throughout the vast metropolis.

They were called the Game Makers. This name, which empowered and acknowledged them as the real protagonists of the games, was reserved for the 70,000 volunteers who served at the recent London 2012 Paralympic Games. It was reserved for those who (made) the games possible and included people with disabilities.

The Paralympic volunteers path started some years before, with selection drafts to get through and afterwards, courses to attend. They served not only inside the Olympic Park, and in activities connected with the athletes, but also throughout the City and its surroundings.

One of their biggest responsibilities was in guiding and helping the athletes. For example, on the athletic sports field (or track), volunteers using wheel chairs were among those organizing the locations for blind athletes. They played a major role as linesmen and women and field assistants.

In their trademark purple t-shirts, volunteers guided athletes and other visitors from the airport and served the competitors as drivers, wheel chair mechanics, doctors, and wardrobe and stores keepers, among other functions.

Humor had its place among the Game Makers. Some volunteers gave the public directions wearing giant pink foam fingers along with their own smiles. Others sat on high chairs in the hot sun and used megaphones to give spectators information and offer welcome and thanks for attending the games. Improvisation on the part of several volunteers resulted in a small group outside the stadium offering "Free Hugs" to visitors.

Although very tired at the end of the games, the Paralympic volunteers were among the many who experienced sadness during the closing ceremonies.

One volunteer named Mary said I would be very happy to finally rest a bit after these ten days, but something unique that I was part of is finished, and I will be sad. I will miss it.

A Moroccan volunteer who uses a wheel chair, and belongs to his National Paralympics Committee, said he had already applied to volunteer at the next Paralympics Games in Rio in four years time.

For Londoner Marco Serena, with Britain's Department for International Development, the volunteers "were the face of London in the world's eyes."

"In the first days, every time I met Olympic and Paralympic Games volunteers in their splendid uniforms on a tube or a bus, I would ask them how it was going, he said. I thank London 2012 (organizers) for this extraordinary experience of sport, humanity and courage that the...Games have been. And to all volunteers involved, you made us proud indeed!

To the millions who say the games, the Paralympics Game Makers provided a wonderful example of volunteerism and a demonstration of inspiration in action.

To find out more about volunteerism during the Olympic and Paralympic games, visit the site:

Daniele Grivel (Italy) is an Intern with the UNV Gender Action Team at its Secretariat in Bonn. He has worked in youth and women's empowerment projects in Malawi, Sierra Leone, Uganda, Kenya, and Bosnia and Herzegovina.   While attending the Paralympic Games this summer, he was struck by how much their smooth operation depended on voluntary action.