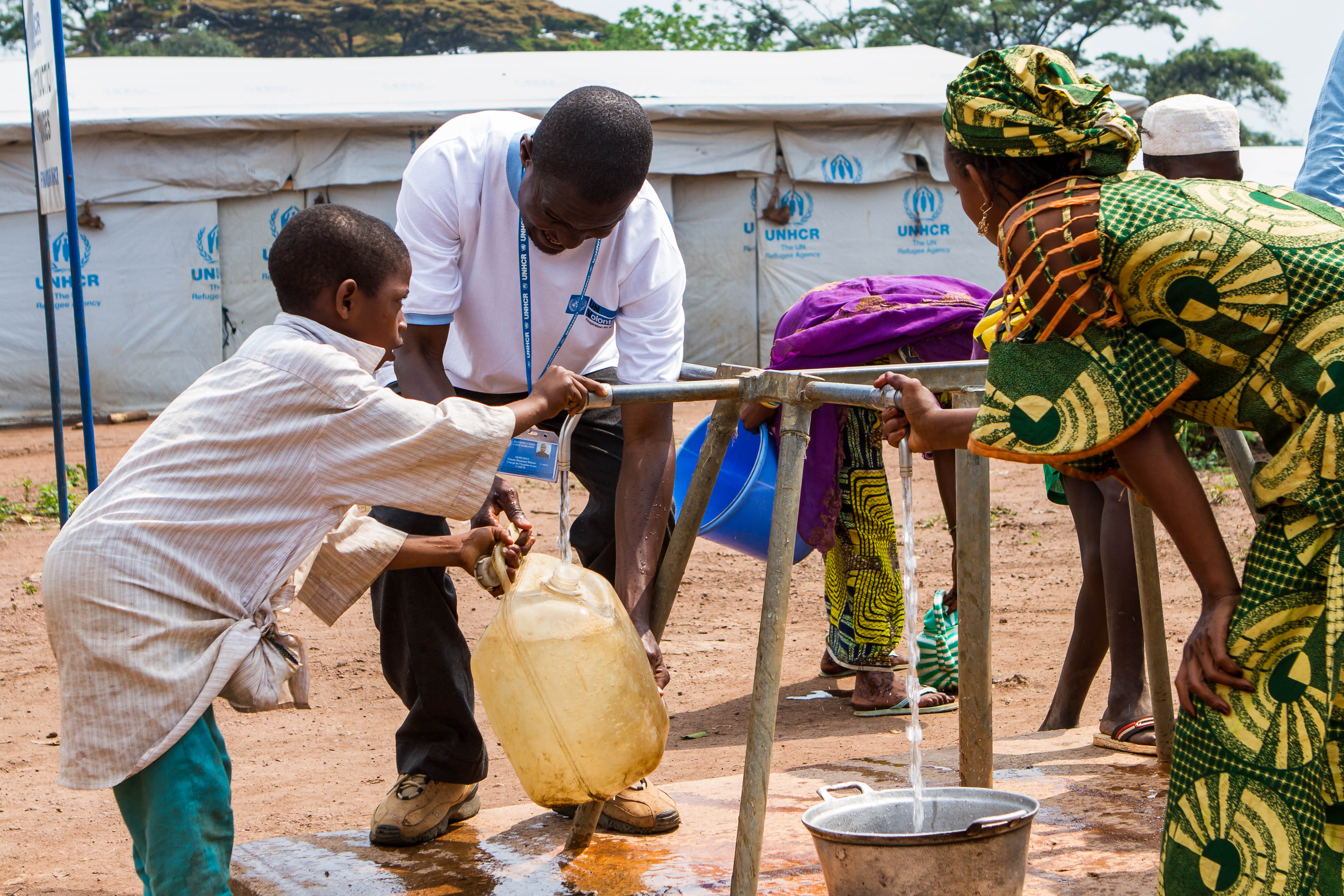 Refugees from the Central African Republic (CAR) have crossed into Cameroon to escape violence in their country. The camp of Gado, in the Garoua-Boulaï area, is next to the border of CAR and receives refugees every day. National UN Volunteer, Hamza Tidjani Ousmane (centre), WASH Officer with UNHCR, plays a key role in explaining and showing refugees how important hygiene is to prevent epidemics. (Rakotondrazafy A. M. Ny Aina/UNV, 2104)

World Humanitarian Day was designated by the General Assembly to coincide with the anniversary of the 2003 bombing of the United Nations headquarters in Baghdad, Iraq. It is a Day to commemorate all people who have lost their lives in humanitarian service and to celebrate the spirit that inspires humanitarian work around the world. UNV joins the world in recognizing those who face danger and adversity in order to help others.

World Humanitarian Day was designated by the General Assembly to coincide with the anniversary of the 2003 bombing of the United Nations headquarters in Baghdad, Iraq. It is a Day to commemorate all people who have lost their lives in humanitarian service and to celebrate the spirit that inspires humanitarian work around the world. The United Nations Volunteers (UNV) programme joins the world in recognizing those who face danger and adversity in order to help others.

UN Volunteers advance humanitarian action in some of the most challenging and dangerous situations in the world. UN Volunteers are working in Afghanistan, Algeria, the Democratic Republic of the Congo, Haiti, Iraq, Kyrgyzstan, Myanmar, the State of Palestine, Pakistan, the Philippines, Somalia, South Sudan, Sudan and Western Sahara, among other locations.

Supporting the operations of various UN partners, UN Volunteers engage in a wide range of roles with the ultimate aim to save and protect the lives of people including refugees and internally displaced persons, to alleviate suffering and to uphold human dignity.

In Syria, for example, UN Volunteers are supporting the United Nations Development Programme’s emergency prevention and protection services for Syrian women and girls fleeing to Iraq’s Kurdistan region. These volunteers are providing emergency legal aid and counselling to those refugees vulnerable to sexual and gender-based violence, human trafficking, under-age marriages, exploitation and other human rights violations.

UNV created and coordinated a network of local volunteers across the Kurdistan region, designing the analytical framework and conducting the analysis and report for the initiative. UNV negotiated with private sector partners to sponsor the launching event.

Likewise, a team of 50 national and international UN Volunteers are supporting refugees through the United Nations High Commissioner for Refugees (UNHCR) in Egypt. They conduct registrations, determine refugee status, offer counselling and child protection and work with partners to provide legal assistance to vulnerable refugees from Ethiopia, Eritrea, Nigeria, Somalia, Sudan and Syria, among other nations.

In Haiti, 20 UN Volunteers serve with several United Nations entities – UNDP, the UN Office for the Coordination of Humanitarian Affairs (OCHA), the UN Department of Safety and Security (UNDSS), the United Nations Population Fund (UNFPA), UNHCR and the World Food Programme (WFP). Their achievements in 2013 include strengthening the capacity of Haitian authorities and supporting civil society organizations with community-based efforts in early recovery, reconstruction and livelihood generation.

UNV is providing crucial support to UNDP, the United Nations Multidimensional Integrated Stabilization Mission in Mali (MINUSMA) and other United Nations partners engaged in restoring peace in this West African country.  Since MINUSMA started its operations in April 2013, UNV has been mobilizing and deploying UN Volunteers to contribute to civilian protection, human rights monitoring, the creation of conditions for the provision of humanitarian assistance, the preservation of cultural heritage and the preparation of free, inclusive and peaceful elections.

As of December 2013, UNV was present in ten United Nations Department of Peacekeeping Operations (UNDPKO) missions and six Department of Political Affairs (UNDPA) missions. Of the international civilian personnel of UN peacekeeping and political missions globally, one out of every three is a UN Volunteer.

In 2013, 900 UN Volunteers represented 20 per cent of the field personnel of the UNHCR, and 350 served with WFP, working to protect the basic rights of refugees and internally displaced persons and maintain a semblance of normalcy by providing schooling, shelter and food, obtaining refugee papers and helping families to return home and reunite. More than 120 UN Volunteers are working with other United Nations entities in Sudan.

One example, of the many dedicated UN Volunteers doing humanitarian work, Dr. Meroni Abraham who worked in Malakal, South Sudan, during the on-going armed conflict. As a UNV Medical Officer, he provided medical services to civilians who had taken shelter within the UNMISS protection site. Medical care for these civilians became the responsibility of the Level I Clinic where Dr. Meroni Abraham worked, as many of the healthcare-providing non-governmental organizations (NGOs) had evacuated their staff out of Malakal due to the fighting.

Moreover, together with the Government of Brazil, in 2014 UNV has launched the Sergio de Mello scholarship for UN Youth Volunteers from the South to serve in humanitarian projects in the South. Announced at a World Humanitarian Day event in 2013 to mark the 10-year-anniversary of the Canal Hotel Bombing in Baghdad, during which 22 people – including United Nations’ Special Representative to Iraq Sergio Vieira de Mello – lost their lives, the scholarship is intended to support the inclusion of Brazilian youth in the UN Youth Volunteers Programme.

"This scholarship truly captures the resolve and dedication of individuals like Mr. De Mello to humanitarian work, and it will serve as a shining example of the unshakeable spirit of the United Nations and its Member States to continue working towards global peace and sustainable human development even in the most challenging circumstances" said Richard Dictus, UNV Executive Coordinator.