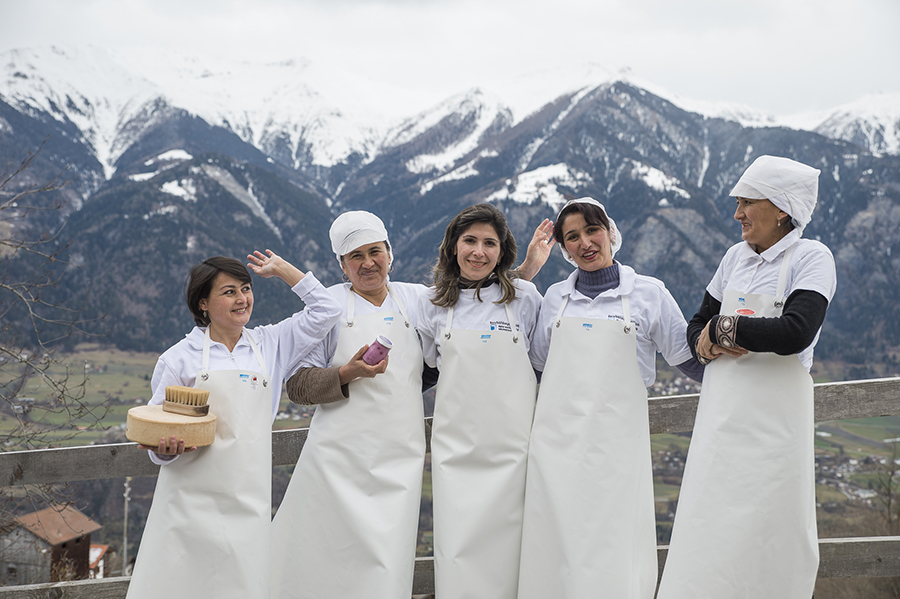 Tajik cheese makers in Switzerland during one of the study trip organized as part of the “Cheese exchange” initiative initiated by Martina Schlapbach while she served as UN Volunteer Associate Project Officer with UN Women in Tajikistan. (Giorgio Hösli/UN Women Tajikistan, 2016)

During a field monitoring mission as a UN Volunteer Associate Project Officer with UN Women in Tajikistan, I got to know the female leaders of two dairies which, independently from each other, approached me with their idea to produce a hard cheese as a more durable dairy product.

During a field monitoring mission as a UN Volunteer Associate Project Officer with UN Women in Tajikistan, I got to know the female leaders of two dairies which, independently from each other, approached me with their idea to produce a hard cheese as a more durable dairy product.

Tajikistan is a country highly dependent on labour migration. One out of eight million Tajiks work abroad. The predominance of men among the emigrants results in a high number of female-led households. Most of the population lives from subsistence agriculture.

An analysis of the dairy market in Tajikistan showed that, although cheese is sold in almost every shop and supermarket, most cheeses are imported products. Private households hold 96 per cent of the cows, but milk is processed by women into a variety of dairies mainly used for their own consumption.


I continued my research into this market, and local experts confirmed the economic potential of setting up a local production of high-quality cheese.

I decided to approach cheese makers in Switzerland with the idea – mainly people who produce cheese on the Alps in summer, in conditions that are very similar to the ones given in the mountainous country of Tajikistan.

The Swiss cheese makers I approached showed great interest in transferring their knowledge on cheese-making technology. They also showed an interest in getting familiar with the traditional milk-processing of a country largely unknown to them.

This is how I got the idea to start a "Cheese exchange" initiative between a group of cheese makers from both countries.

In the framework of the UN Women project “Empowering abandoned women from migrant families in Tajikistan”, and in cooperation with the Swiss Women Farmers’ Association (SBLV), I helped organize 10-day study trips to Tajikistan in December 2015 and to Switzerland in February 2016.


As a result, the Tajiks now produce and sell their own cheese and the Swiss are most inspired by insights into dairy products formerly unknown to them, such as kurut, chakka and kaimok.

A broad network of partners has been established as part of the initiative, and the cooperation continues: together with a friend, I have founded the NGO Tranpshères, through which we are continuing with "Cheese exchange" as our first project, and plan to carry out other innovative knowledge exchange projects in the future.

The "Cheese exchange" initiative empowered ten women in two female-led dairies in Tajikistan to produce and sell their own hard and soft cheeses, directly benefitting the women and their families, as well as their villages.