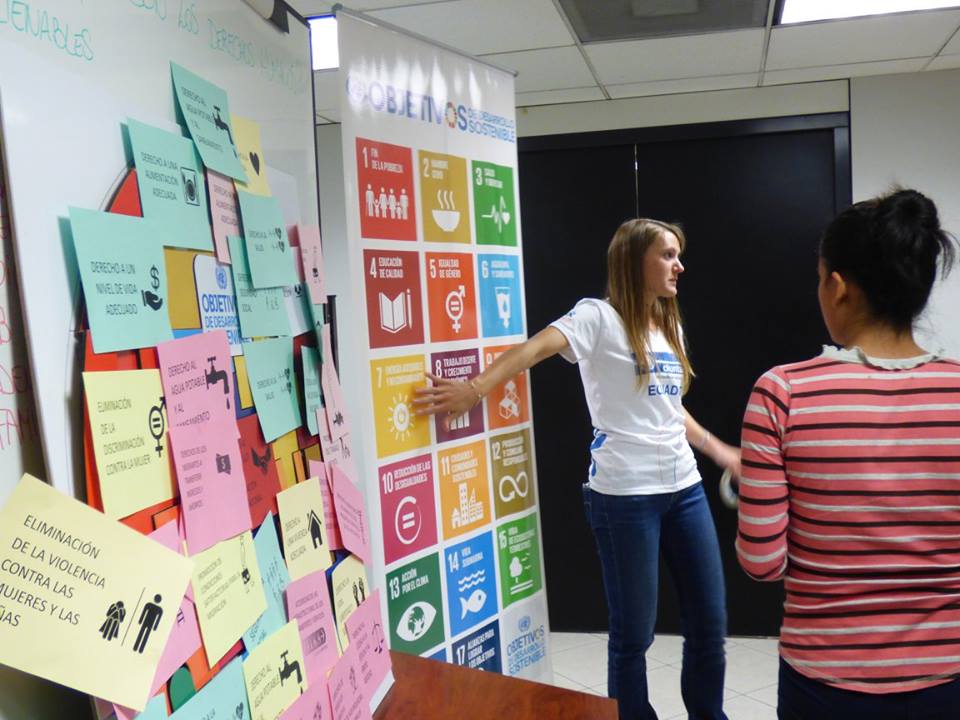 Gaetane Cornet is a UN Volunteer serving as Human Rights Associate at the Office of the High Commissioner for Human Rights in Quito. (UNV, 2016)

Acting for the respect of human rights

«All human beings are born free and equal in dignity and rights », declares the first article of the Universal Declaration of Human Rights. My work at the Office of the High Commissioner for Human Rights (OHCHR) in Quito, Ecuador, has mainly attempted to make this declaration a reality.

Quito, Ecuador:  «All human beings are born free and equal in dignity and rights », declares the first article of the Universal Declaration of Human Rights. My work at the Office of the High Commissioner for Human Rights (OHCHR) in Quito, Ecuador, has mainly attempted to make this declaration a reality.

Discrimination against lesbian, gay, bisexual, transgender and intersex (LGBTI) persons is a recurrent problem in Ecuador. Even though homosexuality was decriminalized in 1997, and discrimination against LGBTI persons is illegal, an estimated 65% of them still suffer from violence in public places. This shows that there is still a long way to go to change mentalities and achieve non-discrimination based on sexual orientation or gender identity.

As part of my work, I organized and conducted training sessions on human rights and non-discrimination for different audiences: from United Nations security, reception and cleaning personnel to State or private institutions and groups of young students, I tried to deconstruct prejudices and break taboos. I tried to show that, far from being a mental illness, homosexuality and transgenderism are an integral part of human diversity and need to be respected.

I also provided technical assistance for the production of an online course on non-discrimination against LGBTI persons, in collaboration with the National Human Rights Institution and the Coordinating Ministry for Social Development. All civil servants at all State levels will have to complete this course in the coming year.

Working in a small team of two people allowed me to work on all fronts for the respect and protection of human rights, both by our institutional partners and by the UN itself.

A major challenge this year was the inclusion of the human rights-based approach in the UN Development Assistance Framework (UNDAF). The interagency coordination was not always easy but we eventually managed to ensure that human rights remain the fundamental concern of every UN Agency.

I am very grateful to UNV for this opportunity to contribute, in my own small way, to the building of a more equal society that is more respectful of human rights.

This experience as a UN Volunteer has made me conscious that everyone, whatever their age, skills or interests, can act for the respect of human rights.

As Eleanor Roosevelt said in her 1958 speech for the 10th anniversary of the proclamation of the Universal Declaration of Human Rights, human rights are “in small places, close to home – so close and so small that they cannot be seen on any maps of the world. Yet they are the world of the individual person; the neighbourhood he lives in; the school or college he attends; the factory, farm or office where he works.”

“Such are the places where every man, woman and child seeks equal justice, equal opportunity, equal dignity without discrimination. Unless these rights have meaning there, they have little meaning anywhere. Without concerned citizen action to uphold them close to home, we shall look in vain for progress in the larger world.”

Bio: Gaetane Cornet is an international UN Volunteer serving as Human Rights Associate at the Office of the High Commissioner for Human Rights in Quito since March 2015. She holds a Master in Law from the Catholic University of Louvain (UCL) and an LL.M in International Humanitarian Law and Human Rights from the Geneva Academy (ADH). Before joining the UN, she worked as a research assistant for several NGOs and academic institutions, and as a legal editor at the International Committee of the Red Cross (ICRC).