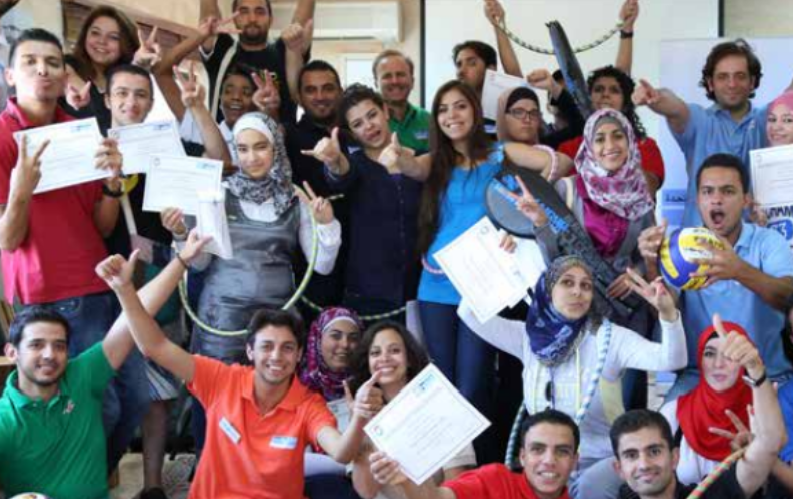 Building trust between young people, their communities and governments in the Arab region

The project brought young women and men, governments, the United Nations and other partners together to share their ideas about youth volunteerism for development in safe forums, following a participatory approach.

The project brings young women and men, governments, the United Nations, and other partners together to share their ideas about youth volunteerism for development in safe, open, equitable forums, many for the first time ever. This lays the groundwork for real, sustainable change and progressive development during a crucial stage in the region’s history.

At the time of the Arab Spring popular uprisings, UNV already had a long-established presence in the region, working with governments, civil society, and community partners to advance peace and development through volunteerism.

However, in 2011, after the largely youth-led revolutions swept across the region and raised an urgent call for a more equitable and inclusive social, cultural and political system, UNV undertook to develop a programme to meet the needs of young people in the region—a programme that would be planned and implemented by youth for youth in Egypt, Jordan, Morocco, Tunisia and Yemen.

UNV, which serves as a bridge between the UN system, civil society and governments, was well positioned to bring together diverse stakeholders in an environment where little trust had existed before. According to the UN Secretary-General’s Envoy on Youth, Ahmad Alhendawi, this is an important role: “The major role of the United Nations is advocacy for better legislation for youth volunteering and participation in political processes”.

The project followed a participatory, bottom-up approach, where consultations were undertaken by UN Volunteers in each of the five countries with a range of stakeholders, including youth, governments, and civil society. Following this, the project was endorsed by the five partner governments.

This is critically important, as it indicates government support for the establishment of a safe space for volunteerism to flourish in the region. Samy Al-Majaly, President of the Higher Council for Youth in Jordan, highlighted the importance of this initiative during the project’s first board meeting in April 2013:

These different youth projects, especially those regarding volunteerism, are very important to our youth these days. We strongly believe in youth volunteerism as it is the foundation for young people in different fields. Volunteerism helps in developing youth and honing their talents, leading to strengthening their relations on different levels.

Arab Youth Volunteering for a Better Future aims to empower youth in the Arab region and strengthen their ability to participate meaningfully in socio-economic development through volunteer engagement. It focuses on building the capacity of governments, increasing awareness of the benefits of volunteerism and building the capacity of youth networks and civil society organizations.

In 2013 and 2014, the programme trained officials in the Egyptian Ministry of Youth’s Volunteerism Unit in the skills necessary to design and manage equitable and inclusive youth volunteer programmes.

The training, which will be rolled out in the other countries beginning in 2014, also examined youth motivations for volunteerism, youth empowerment through volunteerism, the characteristics of good volunteer programmes and volunteer management.

The fact that UNV was able to hold a workshop for a government body where the wider environment for youth volunteering was critically examined is an indication of growing trust between the stakeholders. Maha Ahmed Kamel, one of the participants of the workshop, who runs a youth center in Port Said, said:

The way we are used to organizing volunteer activities is very ad-hoc, but the training has made us much more professional and organized, and enabled us to look at volunteerism from a management perspective.

Poor awareness of the potential of youth volunteerism to support development is a common theme across all five of the project countries. As such, the project conducted a street poll on volunteerism in Jordan, events in Yemen to commemorate International Youth Day, and a “Caravan of Volunteerism” in Tunisia.

Despite substantial security risks the caravan travelled across eight governorates of Tunisia to reach out to local youth centers, civil society organizations, universities, schools and municipalities to raise awareness about youth volunteerism.

At each stop, the local youth organized a one-day volunteer activity, such as cleaning green areas or rehabilitating public spaces, inspiring others to join them. Through their work, and the related media coverage, at least 3,000 youth across the country were motivated to participate.

In April 2014 the project organized its first regional youth volunteering forum in Marrakesh, Morocco, bringing together around 100 participants, 45% of whom were young women. Participants included youth, civil society, governments, and UN entities. Given the widespread mistrust and uncertainty that have been pervasive in much of the region between different groups, the forum presented a unique opportunity for young people, especially young women, to speak openly and honestly about their experiences, expectations, and hopes for youth volunteerism in the region.

This climate of trust between governments and young people speaks to UNV’s unique ability to bridge the gap between the grassroots and policy-making levels. Fares Khiari, a Tunisian participant and journalist, said that:

In order to increase the capacity of youth networks and civil society to support youth volunteerism, UNV organized a summer camp for young volunteers in Jordan in August 2013. The camp was held in partnership with the Higher Council on Youth in Jordan, and was attended by 27 young Jordanians from a wide range of volunteer backgrounds, including university students, youth activists and representatives of civil society organizations.

Participants were encouraged to implement volunteer activities in their communities based on their experiences during the camp. The camp was successful in giving participants a deeper understanding of the power that they have to bring about positive change, regardless of their nationality, religion, gender, or identity.

According to one summer camp participant, Zaidoon Sahawneh, an electronics engineering student and current president of the local committee of AIESEC in the city of Irbid:

In the summer camp I had a chance to interact with people from different backgrounds and with different mentalities, which helped me understand that these small differences are needed to create a perfect and collaborative environment in Jordan. The camp helped me understand my role as a young Jordanian and how individuals can have a huge impact and change the current reality of their communities.

The activities that Arab Youth Volunteering for a Better Future has undertaken since its inception in 2011 have all been contributing to the establishment of an open forum across the region that includes young people, governments, civil society and the UN, where all participants feel safe and empowered to share their ideas about how to improve youth volunteerism, and where volunteering initiatives incorporate best practices.

The continued support for the project from all stakeholders has made it possible to both scale-up pilot initiatives and launch new initiatives, such as a youth volunteering award.