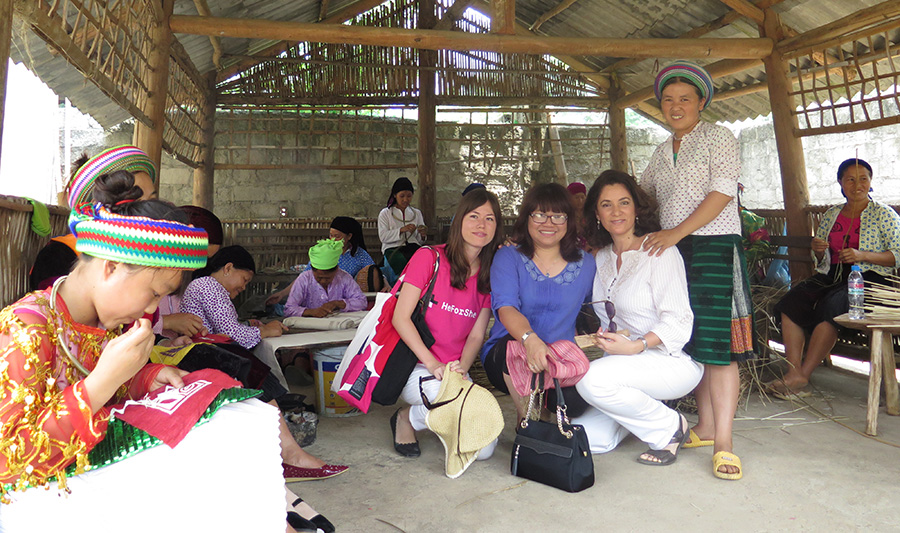 When Leika Aruga (Japan) arrived at her duty station as a UN Volunteer Programme Specialist in Governance for UN Women in May 2014, it was a critical moment for women's rights in Viet Nam. Little did she know how much she would use her training and background in international law to secure the inclusion of women's human rights in Vietnamese laws.

Hanoi, Viet Nam: When Leika Aruga (Japan) arrived at her duty station as a UN Volunteer Programme Specialist in Governance for UN Women in May 2014, it was a critical moment for women’s rights in Viet Nam. Little did she know how much she would use her training and background in international law to secure the inclusion of women's human rights in Vietnamese laws.

When Leika arrived, the Government of Viet Nam was preparing for its periodic reviews under the Convention on the Elimination of All Forms of Discrimination against Women (CEDAW) as well as for the Beijing Declaration and Platform for Action 20th anniversary in 2015.

Viet Nam was undergoing a number of fundamental legislative reforms following adoption of its new Constitution in 2013. It was the final year to fulfil commitments under the Millennium Development Goals, and the transition to a post-2015 agenda was underway which would lead to adoption of the Sustainable Development Goals with a standalone goal on gender equality.

These pivotal processes generated exciting opportunities for engaging with government and civil society and advocating for women’s rights and gender responsiveness.

Once on board, Leika set to work providing technical and managerial support for UN Women which was focusing on strengthening legal frameworks and building institutional capacity with a view to changing national laws, policies and practices to better safeguard women’s human rights in Viet Nam, increase women’s access to justice and help raise women’s voices to protect these rights.

Among numerous tasks she undertook, Leika supported the Viet Nam government delegation and NGO representatives at the 61st CEDAW session in Geneva (in July 2015). Afterwards, she helped develop a national action plan to implement the CEDAW recommendations as well as the parallel initiative by civil society organizations to monitor its implementation.

Some 293 legal and gender officers from the Ministry of Labour, Invalids and Social Affairs, the Ministry of Justice and the parliamentary committee on social affairs attended training and workshops Leika helped organize on CEDAW and women’s human rights standards to be applied in law making.  Under the project, Leika also developed the agenda and training materials, through consultation with the trainer and stakeholders, for civil society training and workshops that were attended by more than 200 people, including women marginalized due to their HIV status, ethnicity, age, gender identity, sexual orientation or disability.

To mainstream gender concerns into the laws and policies of Viet Nam, UN Women worked with the Ministry of Justice and Parliamentary Committee on Social Affairs to conduct reviews of draft laws based on CEDAW.  During the legal review of key laws, Leika consulted and coordinated with other United Nations agencies to prepare joint UN recommendation statements that advocated for gender-responsive revision of laws.

As part of the initiatives to enhance women’s access to justice, Leika assisted a project that used a gender lens to review the training curricula, teaching materials and methods of the Judicial Academy, with the goal of institutionalizing gender training in the criminal justice system, particularly with reference to violence against women.

“This project,” Leika observed, “will contribute towards the transformation of the patriarchal justice system which has been hindering women’s access to justice.” “Work remains to address embedded harmful gender stereotyping in the justice sector as well as law making bodies. As much as gender sensitizing trainings are needed for duty-bearers, women need to be empowered to be able to demand their rights and hold the duty-bearers accountable,” Leika adds, “so that all women in Viet Nam can one day live free of gender based discrimination and violence.”

Leika Aruga is one of 16 Japanese nationals deployed during 2014 and 2015 as a United Nations Volunteer under the Program for Human Resource Development for Peacebuilding (HRD), a joint partnership among the Ministry of Foreign Affairs of Japan, the Hiroshima Peacebuilders Center and UNV, funded by the Minister of Foreign Affairs.

Leika holds a Master of Laws (LLM) from Utrecht University, specializing in international law on human rights and criminal justice, and a Bachelor of Law from Waseda University. Prior to her assignment, she worked on litigation projects in the United States with prominent law firms. Adding to her legal background, Leika was trained as a community organizer by Citizens UK and supported the development of a legal referral system for refugees and migrants in London.

She also empowered women’s leadership through a participatory architectural project in a rural village in Uttar Pradesh, India, provided legal assistance to refugees arriving in Japan, and conducted a situational analysis of Liberian refugees residing in Ghana.

Working alongside national counterparts, UNV HRD Volunteers contribute their skills, experience and enthusiasm to projects that range from humanitarian coordination within emergencies and protracted displacement situations to crisis prevent and post-conflict recovery efforts.  A number of assignments also support and strengthen the delivery of basic services so that local governance and civil society can be stabilized and strengthened for the long haul.  Social inclusion plays a vital role in all aspects of the volunteer assignments, with youth, women and marginalized groups proactively included in peace and development initiatives in communities.