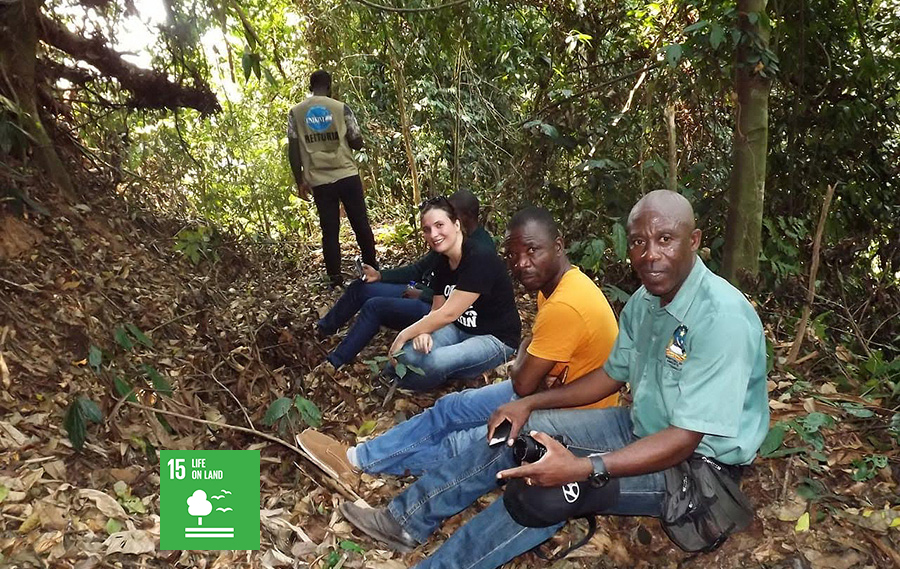 Vanessa Falkowski (Brazil) is a UN Volunteer Biodiversity Officer serving with UNDP. Here she is seen during a visit to Pingano Mountain, Uíge Province, to discuss the creation of a protected area in the zone.
(UNV, 2018)

The Ministry of Environment of Angola has been implementing projects with the goal of creating new protected areas, supporting the infrastructure and management of existing protected areas and combating illegal poaching and human-wildlife conflict. Vanessa Falkowski (Brazil) serves as a UN Volunteer Biodiversity Officer with the United Nations Development Programme (UNDP) in the country. Here, she shares her experiences after almost two years in Angola.

For this reason, the Ministry of Environment of Angola, with the funding of the Global Environment Facility and UNDP has been implementing projects with the goal of creating new protected areas, supporting the infrastructure and management of existing protected areas and combating illegal poaching and human-wildlife conflict.

I have served for almost two years as a UN Volunteer Biodiversity Officer, contributing to the management of these projects, planning of activities, liaison between different institutions and field visits.

It is very rewarding to be involved in this project and see my work turning into concrete results, which are linked to the Sustainable Development Goal 15. --Vanessa Falkowski, UN Volunteer Biodiversity Officer with UNDP, Angola

We are currently inthe implementation phase of project 'Expansion and Strengthening of Angola’s Protected Areas System'. This project focuses on the creation of new protected areas in the country and in the rehabilitation of Quiçama, Bicuar, Cangandala and Maiombe National Parks and Luando Strict Nature Reserve, the land of the emblematic Giant Sable Antelope, a threatened species and cherished symbol of Angola.

We visit the prospective zones for the creation of protected areas, consulting the stakeholders and verifying the potential of these areas.

For the existing protected areas, the project has financed the construction of important infrastructure, the preparation of management plans and fauna surveys, the installation of radio communication systems, the installation of water holes for animal and human consumption, the purchase of material for the park rangers and the mapping of all Angola’s protected areas.

We hope that this project can contribute for repopulating the Angolan parks with wildlife, make them more biodiverse and more attractive to tourism, which will also help the country’s economy.

It is very rewarding to be involved in this project and see my work turning into concrete results, which are linked to the Sustainable Development Goal 15: Protect, restore and promote sustainable use of terrestrial ecosystems, sustainably manage forests, combat desertification, and halt and reverse land degradation and halt biodiversity loss.

Besides working for this project, I also support the preparation phase of other two projects linked to Marine Protected Areas and Combating Illegal Wildlife Trade. Moreover, being a UN Volunteer in UNDP, I also participate in the general activities in the agency and have close interaction with my colleagues and UN Volunteer fellows.

Despite being in a foreign country, I was able to adapt easily to Angolan culture. I am from Brazil, so at least the language here is not unfamiliar to me!