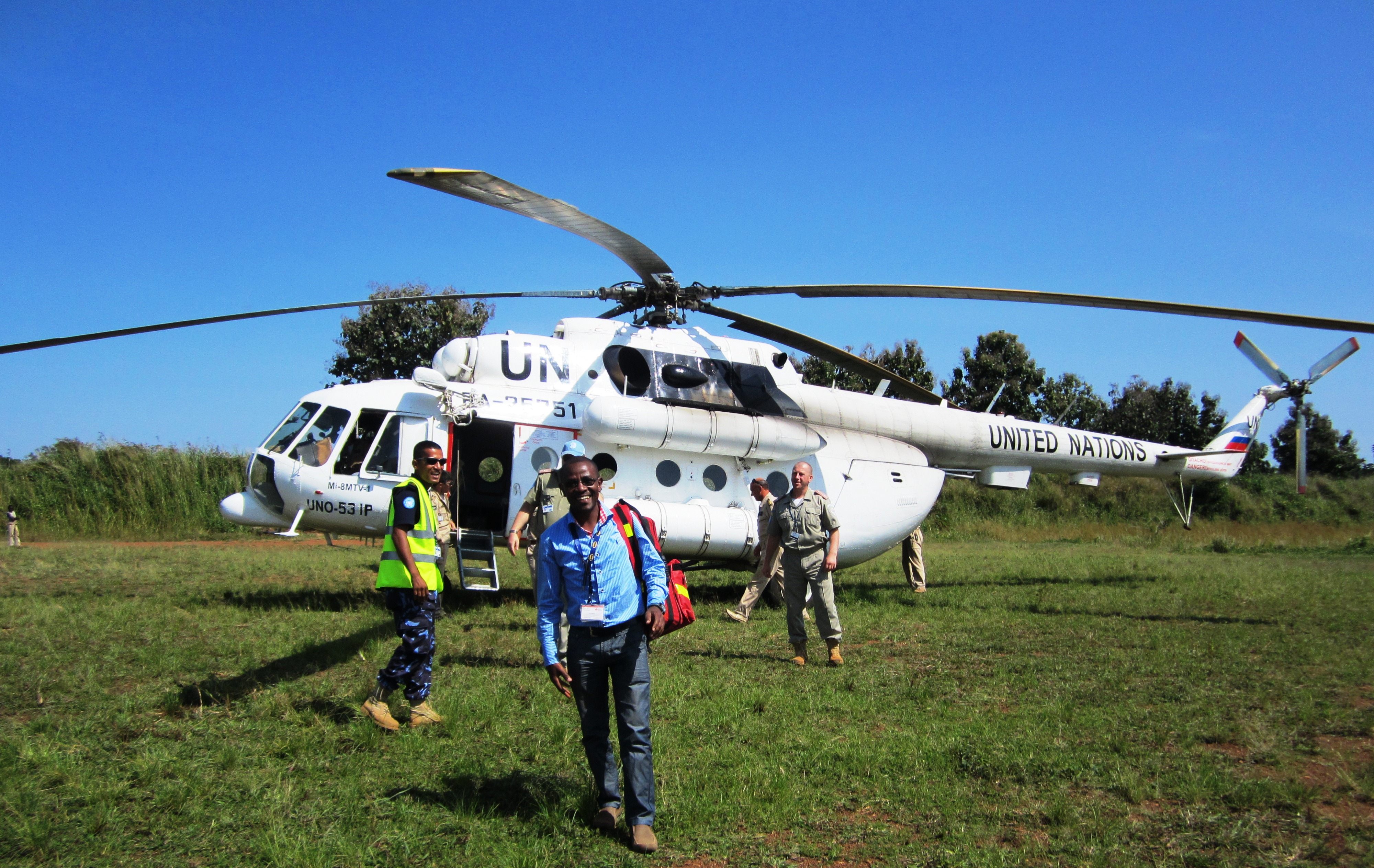 As a UNV Medical Officer attached to the United Nations Mission in South Sudan (UNMISS) Level I Clinic in Bentiu, Dr. Simon Bagumaho, is challenged daily to carry medical procedures normally beyond the scope of the health facility. In this in-depth Volunteer Voice, Dr. Bagumaho reflects on how he and his medical team have risen to these challenges

Bentiu, South Sudan: From my time as a United Nations Volunteer with the United Nations Mission in South Sudan (UNMISS), I will always remember waking up to the sounds of gunshots and heavy mortar shelling on Monday the 16th of December 2013. An uneventful weekend had been followed by one of the most chaotic and frightening times in my life.

As a UNV Medical Officer attached to the UN House Level I Clinic in Bentiu, it became obvious there would be no way of getting to work that day. With so many civilians from the surrounding area seeking shelter in the UN House compound, I knew my work could not wait for long.

The following day, driving an ambulance in the first convoy from the Tomping UN compound to the UN House compound, I was among the first to respond to the health needs of the displaced people who had sought shelter behind the compound walls. From that day through to the 30th of January 2014, the health services team I was a part of attended to 1,092 internally displaced persons, (IDPs), among whom we assisted with 27 normal births, six obstetric emergencies and 20 miscarriages.

The obstetric emergencies I assisted during this period made the greatest impact on me. As a curfew had been imposed between 1800 and 0600 hours, the UN House Level I Clinic was cut off from the higher-level health facilities at the UNMISS Level II Hospital and the Juba Teaching Hospital for 12 hours at a time. This meant that during these hours our medical team had no way of referring emergency cases to other, better equipped facilities.

One case that stands out in my memory was when I assisted a woman to deliver a primigravida breech birth. This means it was the woman’s first pregnancy and that the baby was positioned to be born with its legs first instead of its head.  Under normal circumstances, standard obstetric care would have called for an emergency Caesarian Section operation. However, with the curfew in place, this was not an option.

So, we immediately rushed the mother into our emergency delivery shelter. After explaining to her the difficulties associated with this type of a delivery, I performed an episiotomy – an incision made in the vaginal wall to assist in delivery - and carefully extracted a baby boy.

He was born with an initial Apgar score of 4, literally blue and unable to cry. However, after nearly 20 minutes of intensive medical attention, the baby’s Apgar score rose to 8 and then to 10 as he slowly turned a healthy pink color and began to cry.

Even before the conflict erupted, South Sudan ranked as having the highest maternal mortality rate in the world, with an estimated 2,054 deaths occurring per 100,000 live births. This astronomical figure represents a 1 in 7 chance of a woman dying during her lifetime from a pregnancy-related cause. The current conflict, therefore, is likely to only make the situation worse.

My experience as a UN Volunteer working in South Sudan, especially during this crisis, has allowed me to experience firsthand many of the challenges associated with providing maternal and child health in times of conflict. I am happy to be contributing to saving the lives of mothers and their children and am proud of being a UN Volunteer in South Sudan. From this experience, I am determined, more than ever, to continue helping to improve the health and lives of our mothers and their children. After my service, I intend to continue pursuing my career in public health with a focus on maternal and child health.

Dr. Simon Bagumaho has been working as a medical professional providing health care to women and children since 2005. He is currently stationed at the Bentiu Level I Clinic in Unity State as a UN Volunteer with the United Nations Mission in South Sudan (UNMISS).