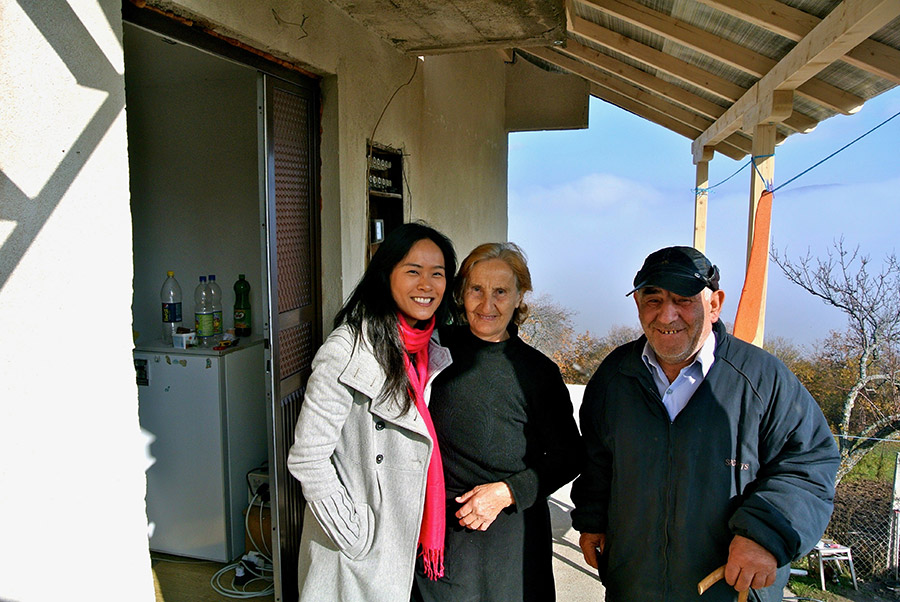 International UN Volunteer Boram Kim during the visit to a minority household in the Novo Brdo/Novobërdë Municipality, Kosovo. (UNV, 2014)

While I was a university student, development cooperation as a field of study was just taking off in the Republic of Korea. My country was transitioning from being a recipient of development assistance to a donor country. I found an opportunity to intern at the United Nations Secretariat in New York in 2003, and after I finished studying I became a UN Volunteer. It was Korea’s history of conflict and mediation by the international community and the United Nations that originally inspired me to pursue such international experiences.

I had decided on my career path in international development during my studies in Korea and Spain. What became apparent though was that I desired to work in the field, to be closer to the lives we aim to impact. I started searching.

I first became aware of the United Nations Volunteers (UNV) roster through a Korean online group. As I tried to understand how exactly I could contribute to the work of the UN, I realized that volunteering was one of the opportunities to be exposed to the system. Becoming a UN Volunteer immediately appealed to me because of UNV’s full integration into the UN system. I enrolled and then jumped at the opportunity when offered an assignment as a UN Volunteer Political Affairs Officer in Timor-Leste.

At that time, Timor-Leste was recovering from civil strife and preparing for presidential and parliamentary elections with the support of the United Nations Integrated Mission in Timor-Leste (UNMIT). My role was to carry out political monitoring and reporting. Attending high-level political meetings, following ballot boxes being delivered by helicopter, and providing round-the-clock monitoring support on the day when the President was attacked, are among the memorable experiences that made my first UN Volunteer assignment fulfilling.

I moved to Jerusalem the following year to take up a post as Programme Analyst in charge of the Rule of Law, Justice and Human Rights portfolio with the Programme of Assistance to the Palestinian People of the United Nations Development Programme (UNDP). The opportunity came through the Junior Professional Officer (JPO) programme funded by the Government of the Republic of Korea. Unsurprisingly, the projects I ran from the West Bank to the Gaza Strip all benefited from the service of UN Volunteers.


In the course of my professional and volunteering journey, I faced a degree of judgment from others as to why I would leave a UN staff position to then take a break or take up a UN Volunteer assignment. My answer is simple: follow your heart.

After living and working in complex conflict and post-conflict environments for several years, I felt that it was time to step back and evaluate my experience before becoming overwhelmed by the sense of helplessness and injustice that can creep up when working in challenging contexts. I made the difficult decision to leave my post in the State of Palestine, take a break and travel to Mongolia. When I felt ready to return to work, an opportunity came knocking. I joined in 2013 the United Nations Interim Administration Mission in Kosovo (UNMIK) once again as a UN Volunteer. There, I monitored and reported on non-majority community affairs at the municipal and community level.

Undoubtedly, volunteering and working for the UN changed my life in so many ways. I met my life partner while both of us were serving as UN Volunteers in Timor-Leste and we now live in Germany where I work for UNV HQ (clearly, things have gone full circle). We have had many challenging and exciting years along the way, including a honeymoon in Iraq and the birth of our beautiful twin girls. I feel that it is a privilege to have the opportunity to contribute to improving the lives of people. Who knows what will come next.

Ms. Boram Kim (Republic of Korea) holds a Master in International Studies (Development Cooperation) from Ewha Womans University in Seoul, Republic of Korea. In the UN system, she served as UN Volunteer Political Affairs Officer in Timor-Leste (2007-2008) and Kosovo (2013-2014), and UNDP Programme Analyst in Jerusalem (2009-2011). She currently holds the post of Portfolio Manager at UNV HQ in charge of Europe, the Commonwealth of Independent States and Egypt. She is passionate about diversity and inclusion and her favourite Sustainable Development Goal is Goal 16: Peace, Justice and Strong Institutions.