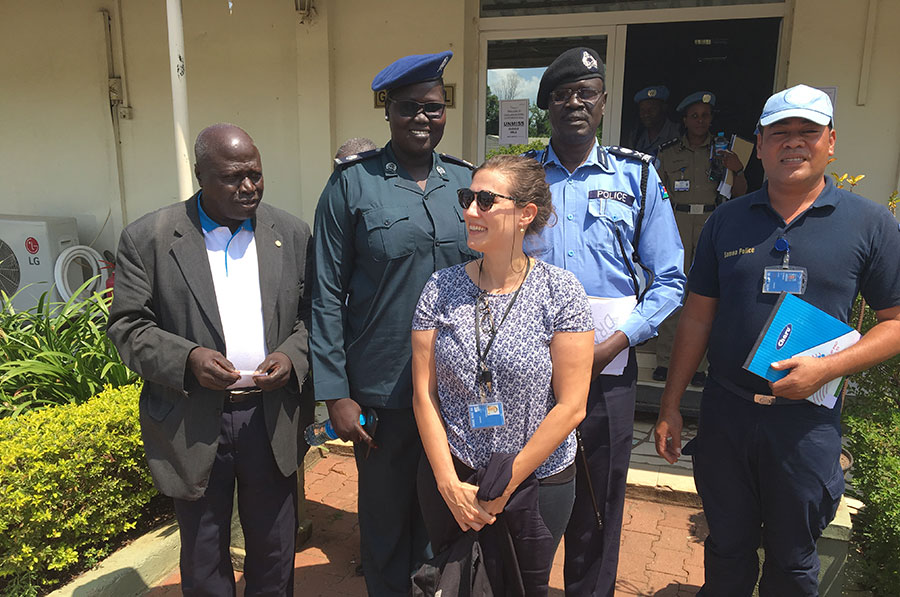 Michele De Aquino (centre fore, Switzerland), UN Volunteer Rule of Law Officer with UNMISS, with counterparts during her assignment in the field.
UNMISS, 2019

Going beyond self in South Sudan, the story of one woman humanitarian

UN Volunteers make important contributions to UN action in the pursuit of sustainable development, with a particular focus on people in transition or crisis. So many of these UN Volunteers, particularly women, put themselves on the front lines to help people affected by crises. Before joining the United Nations Mission in South Sudan (UNMISS) as a UN Volunteer one month ago, I really had no idea what to expect. I had never ventured to this region of Africa, and I wasn’t quite sure how I’d fit in amongst my peers or the locals. Still, my staunch curious nature overcame any insecurities I may have had pre-departure and took the wheel, guiding me on my next odyssey.

I quickly discovered that the mission is a mosaic of diverse characters facing unique challenges and chasing different dreams. For example, in my role as UN Volunteer Public Information Officer, I hoped to use my writing to highlight the collective challenges, as well as accomplishments, of a nascent nation like South Sudan to a global audience. But I never really considered what I was doing as humanitarian work.

While I typed away at a comfortable desk at headquarters in the capital, Juba, most of my colleagues were on the front lines in the field making a direct impact on civilians’ lives. How could we possibly be in the same category?

I recently gained a fresh perspective on the matter after sitting down with a fellow UN Volunteer to hear more about what her work means to her, on the occasion of this year’s World Humanitarian Day. Michele De Aquino is one such UN Volunteer, serving with UNMISS since June 2018, and I'd like to share her story.

Michele De Aquino is a UN Volunteer Rule of Law Officer hailing from Bern, Switzerland, who has been in Juba with the peacekeeping mission since June 2018. Her area of expertise is transitional justice, which focuses on supporting countries transitioning from authoritarian regimes or conflict in addressing human rights violations through both judicial and non-judicial frameworks, such as truth commissions, reparations and institutional reforms.

Michele first became interested in transitional justice after working for the UN International Criminal Tribunal for the genocide in Rwanda in 2015, where she saw firsthand how punitive action does not always suffice to restore the dignity of victims or quench their thirst for justice.

Putting people on trial is not a solution that can satisfy everybody in every situation... Sometimes, people just have their own survival and livelihood in mind, and for them a trial somewhere in a faraway country does not give the feeling that justice has been served. For others, it is enough to be given a piece of land they can restart their lives on.

Wanting to learn more, Michele headed back to Geneva to complete a specialized master’s degree in the field.  She then briefly worked in Myanmar with a local NGO providing assistance to minority ethnic groups seeking autonomy from the military regime, before being offered the opportunity to become a UN Volunteer in South Sudan last year.

"It sounded very interesting and was just something very different,” Michele says, recalling her reaction to the news.

For me, this was a chance to really help change the system, to support the UN in fortifying the country’s laws and its judicial system.

Following the signing of a peace agreement in 2005, which silenced decades of war between the then Sudan’s rival factions, a referendum in January 2011 saw South Sudan become the world’s youngest nation. Peace, however, was still a distant notion.  Rape, cattle raids, pillaging, inter-ethnic violence, and murder continue to be commonplace reality for many civilians.

Poverty and insecurity plague communities across the country, and nearly two million find themselves internally displaced without any idea of when they might be able to return to their homes.

Over the years, the government of South Sudan has focused increased attention on reconciliation and building local judicial capacity as part of paving a path towards cohesion and stability. With the support of UNMISS Rule of Law counterparts like Michele, these efforts came to fruition in December 2018 when South Sudan’s chief justice deployed judges to launch a mobile court in Bentiu town, home to the peacekeeping mission’s largest protection of civilians site.

Residents of the site, and in the larger community, have borne witness to countless crimes, especially during the conflicts of 2013 and 2016, but a five-year dearth in any sort of local judicial oversight has caused a lag in the delivery of justice to victims. The new court brought accountability to atrocities committed within the protection site and gave courage to dozens more women, as well as relatives of victims, to come forward with their stories. This is the second mobile court to be set up in the country, with the first being established two months earlier in Malakal, just east of Bentiu, where the mission’s second largest protection site can be found.

The mobile court is not only about trying individuals—it’s about sending the message that the UN will not tolerate impunity, especially for sexual and gender-based violence, and about setting an example for the local government. After the first mobile court, UN Police told us that civilians at the sites started to become more aware of our message, and this changed their perspective of the mission as a protective force.”

In addition to the mobile court in Bentiu, Michele also highlighted her experience working directly with lawmakers, an aspect of her job she loves. Earlier last year, she had the chance to conduct public consultations with members of parliamentary committees and civil society on two major international human rights treaties which would face a vote in parliament. After months of discussions, the treaties were ratified without reservations and put into effect this past June, representing a step forward in boosting the government’s accountability and a huge sense of gratification for Michele.

"It can be frustrating for us as mediators when we cannot facilitate institutions in finding common ground,” Michele said. "But when they do, it’s a nice feeling to know that we have their trust.”

Michele’s journey in South Sudan so far has been sprinkled with many triumphs, along with the occasional grey cloud (and not just during the rainy season). When she does encounter a setback, Michele retains her optimism and tells herself that things can only go better next time.

A lot of people say they want to get into this line of work because they want to change the world, but it is hard to make a difference alone... for me, my work is about going beyond my own comfort zone to help others, no matter how small the impact may be.

Which brings me back to my original musing: what is it that makes a humanitarian? UN Volunteers come in all shapes and sizes, from countries all over the world, and we are all exceptional in our own way.  But no matter who we are, our audacity to see beyond the myopia of an era which constantly places the self at center stage is the common link we all share, as Michele’s story reminds us, and perhaps what it truly means to be a humanitarian.