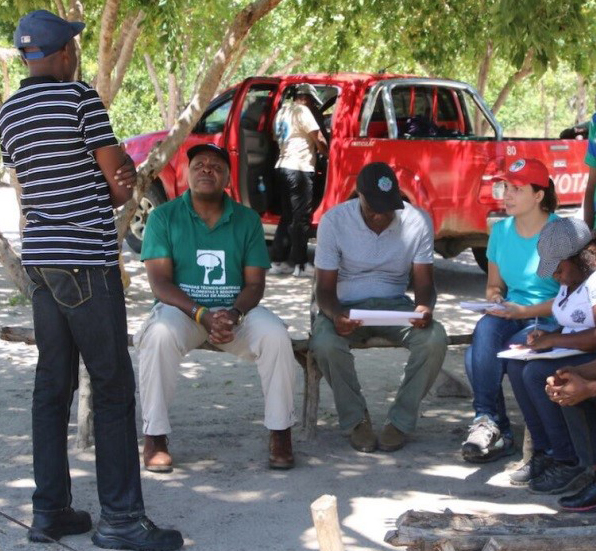 UN Volunteer Vanessa Falkowski (second from right) works with local stakeholders to collect suggestions for the improvement of the national parks. (UNV, 2017)

One of 39 Brazilian UN Volunteers serving around the world in 2016, Vanessa Falkowski left Brazil to start a new experience in Angola as Biodiversity Officer with UNDP to create and preserve nature reserves in the country.

As a Forest and Nature Conservation Specialist, Vanessa Falkowski had been working at a rural settlement when she decided to move to Luanda, Angola, to take up her assignment as Biodiversity Officer with UNDP within a project for the Expansion and Strengthening of Angola’s Protected Area System.

The Angolan civil war that came to an end in 2002 was followed by the destruction of several protected areas, resulting in the loss of many forests, animals, and nature.

“Now more than ever, the country needs to preserve its nature and national parks,” Vanessa explains. She has been working to make preservation possible, together with her team, by facilitating the dialogue between Angola’s government and the Global Environment Facility (GEF), which funds the project.

As a follow-up to the Iona National Park Project, which established a conservation reserve, the new project aims to create and preserve other nature reserves.

“In the initial phase, we have been meeting with local government authorities and the park’s administrators, inspectors and entrepreneurs to understand the situation and get feedback and suggestions on what needs to be done to improve the areas,” Vanessa says. “We organize meetings at the parks to listen to the people who are directly or indirectly involved, and then make a list of priorities to include in the project.”

“We also aim to have local communities participate in development initiatives within the parks, ensuring that the people who live in these protected areas lead a sustainable lifestyle which does not affect the relationship human-nature,” Vanessa adds.

With her contribution as a UN Volunteer, Vanessa hopes that the project will help to expand protected areas in Angola, allowing the preservation of different existent biomes in the country.

“I try to be in contact with local people, and hope that my work will have a durable impact. I don’t want to say that I only passed through here,” she concludes.

Vanessa is one of the many professionals from the Global South deployed by UNV to contribute to the development of other nations also in the South. In 2016, almost 83% of UN Volunteers serving in the South came from the South.