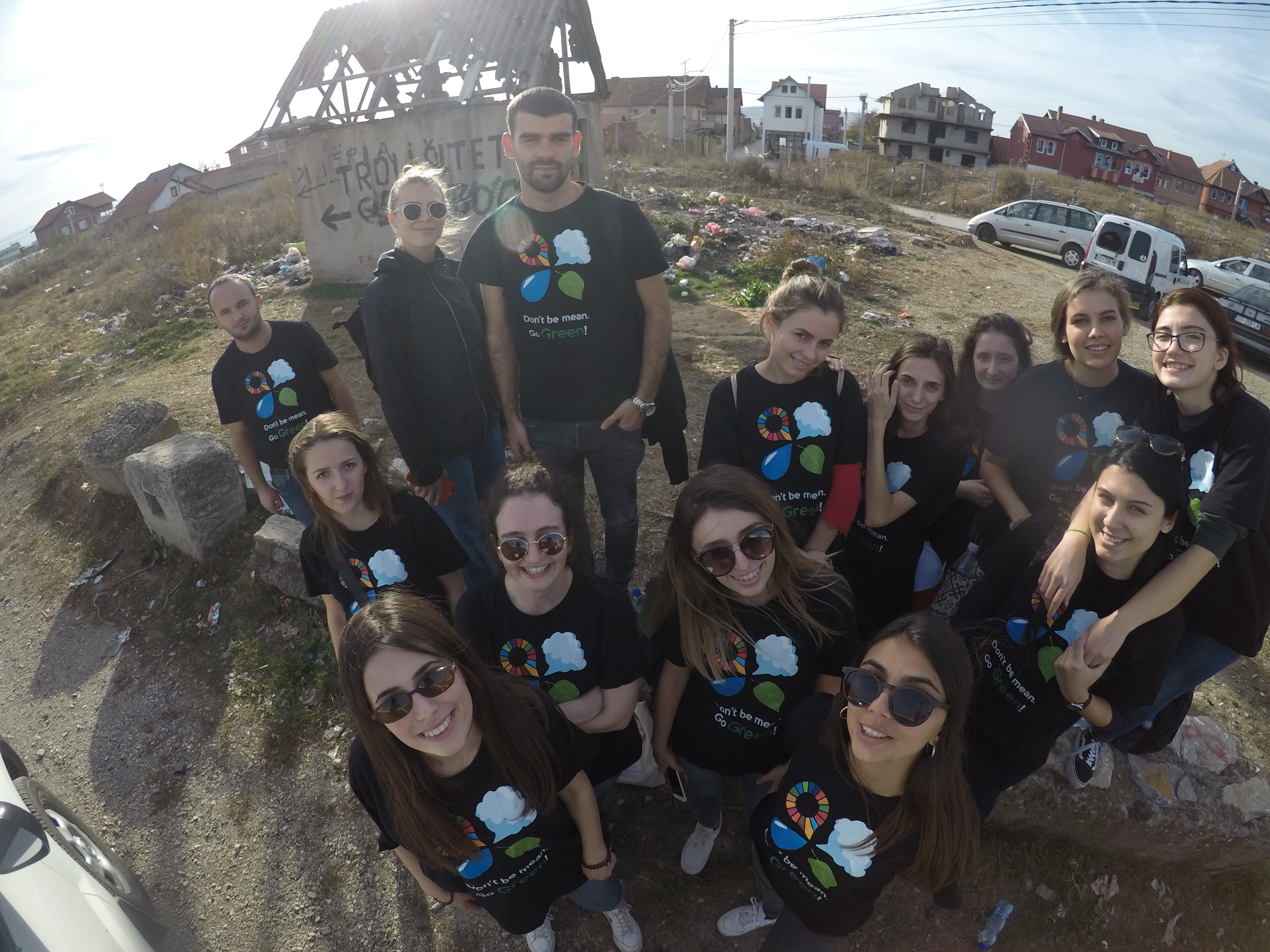 Volunteer students from the University of Pristina are improving the quality of life in polluted municipalities of Kosovo
UNV Kosovo, 2018

Environmental pollution is one of the biggest problems affecting lives of people in Kosovo*. Air pollution is seriously threatening the health of Kosovars - children and elderly in particular.

Air pollutants (caused by two coal-fired power plants, the high intensity of road transport, and  household burning of wood and coal), along with poor waste management, abuse of the natural resources and widespread use of fertile land for construction, are seriously threatening the health of Kosovars -  children and elderly in particular.

“Healthier Kosovo”, a joint project of UNDP, UNV and WHO, supported by the government of Grand Duchy of Luxembourg, responds to this serious, yet often neglected problem.

The project aims to contribute to reduction of pollution by providing capacity development to Kosovan institutions and civil society -  raising awareness and sharing information, but also involving communities to contribute in alleviating this health-eroding issue.

As part of community engagement, UNV and UNDP have selected an innovative and participatory co-design methodology, where communities are not only regarded as ultimate beneficiaries of the anti-pollution activities but are key partners in identifying problems and solutions. The final goal is building sustainable and meaningful changes for everyone.

The first step of the co-design practice, called explorative enquiry, began last year with consultation and information gathering. The exercise delivered the necessary tools for communities to express their concerns.

20 volunteer students from the University of Pristina (studying in a diverse array of disciplines: architecture, sociology, renewable energy, environmental engineering and design), were the brains and arms of this challenging undertaking.


The participation in “Co-Design Against Pollution” has had positive effects for all of us. I think that the prototype which is based on users’ needs is effectual, adequate and sustainable. Also, moving people out of their comfort zone is definitely an essential component in the successful results of the project.-- Rajmonda Jetullahu, student of architecture in the University of Pristina

During the preparatory phase, the students, divided into groups, were trained through a workshop facilitated by UNV which helped the volunteers embrace the co-design concept, define target audiences, select the most suitable interview methodologies, and prepare the questionnaires - all before starting the explorative research in the field.

Fushe Kosove/Kosovo Polje and Obiliq/Obilic – sadly renowned for being two of the most polluted places in Kosovo – are the municipalities where co-design activities are focused. 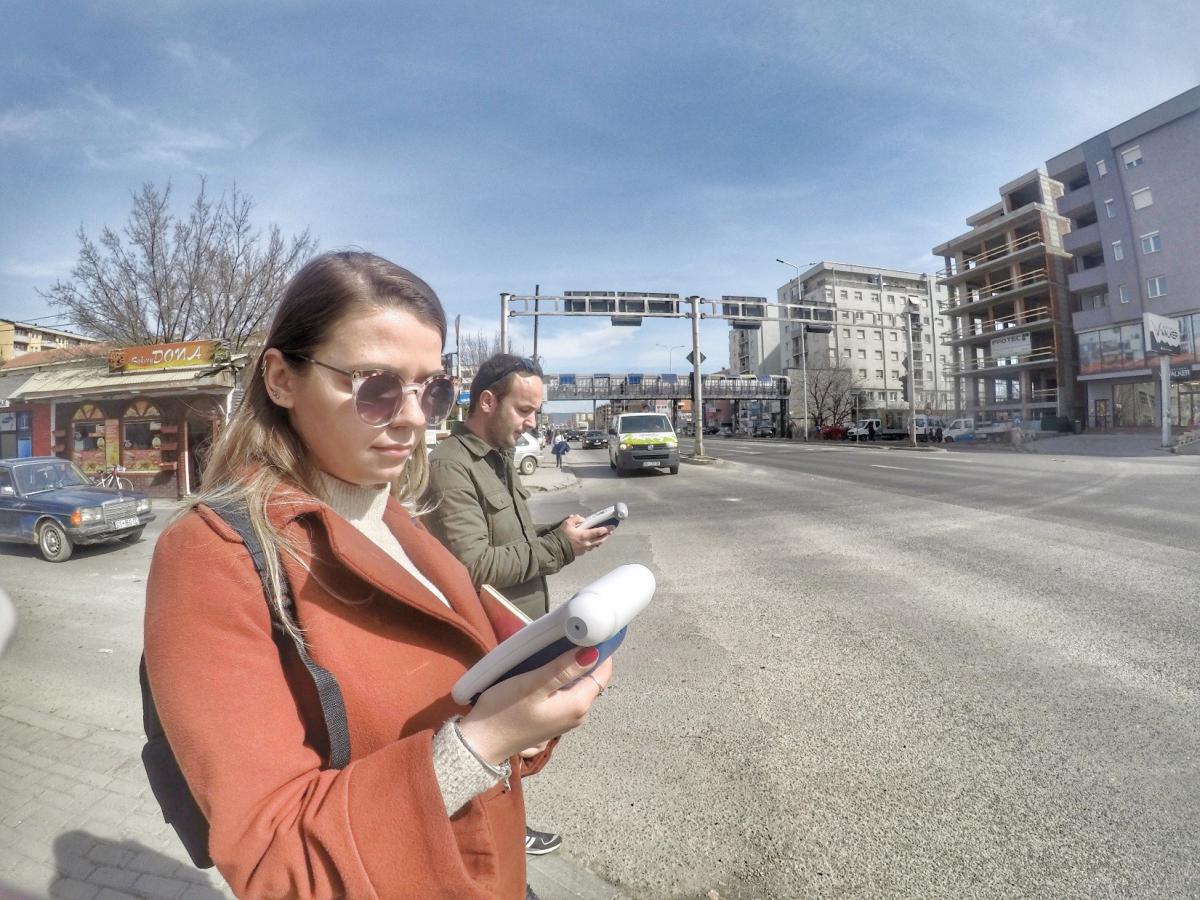 Starting in Fushe Kosove/Kosovo Polje, during the month of October, the students interviewed over 650 people from different communities in the area in order to identify the most pressing needs and problems, and willingness of people to act in addressing the issues.

“There are many factors that are helping in deterioration of the environment in our town. We understand that the powerplant is the highest contributor to the population exposure to air pollution, however, I know that the increased number of vehicles and busy roads are definitely not helping this case,” states a resident in Apollonia neighborhood in Fushe Kosovo/Kosovo Polje states.


Convenience is often the main reason why people throw garbage on the street. They litter as it is too much trouble for them to carry their garbage around until they find a garbage bin. They view littering as an inconsequential act – says a respondent from Dardania neighborhood.

Testimonies like the ones above were drawn from the pool of interviews revealed a clear commonality about the concerns of respondents.

Consolidating this data allowed volunteer students to proceed to the next phase of co-design: sustained participation where co-designers worked together to translate what they heard from people in communities into frameworks, opportunities, solutions and prototypes.

Springboarding from semi-structured interviews, prior to going out in the field, co-designers grouped the questions into five different categories: i) issue, ii) change, iii) location, iv) action and v) demographics. 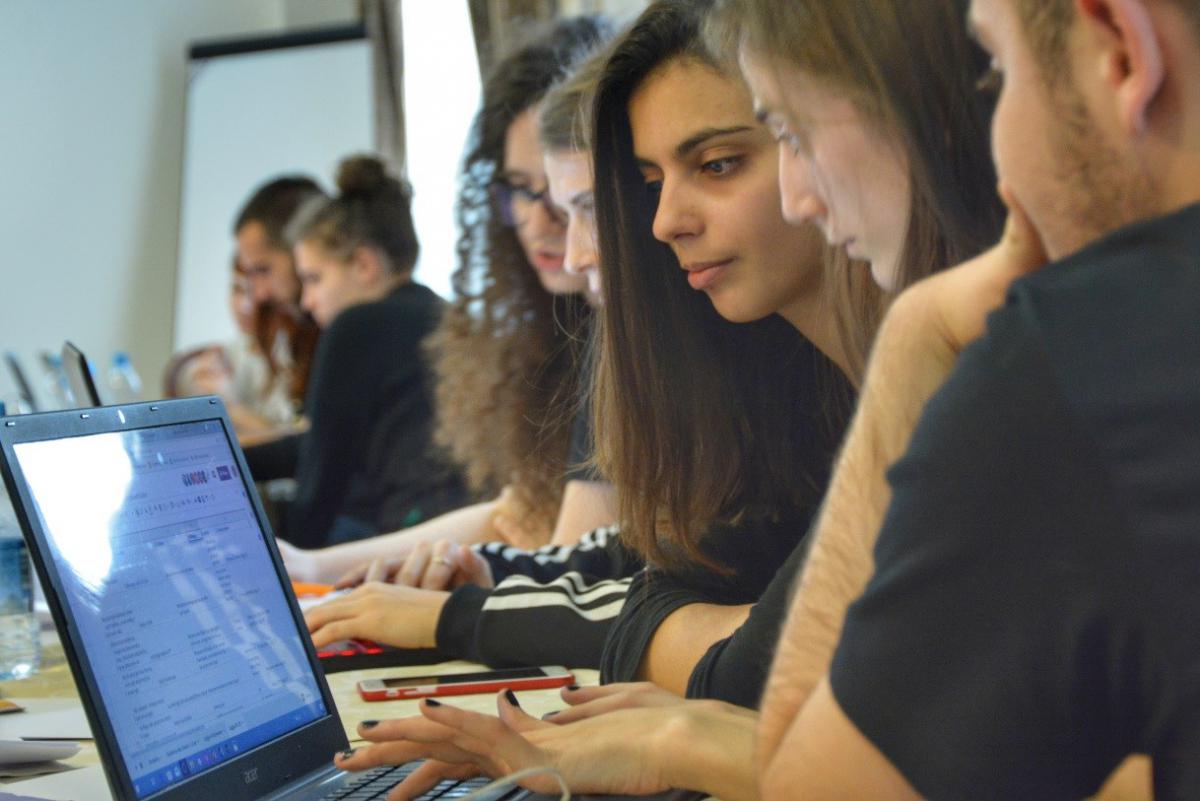 By touching upon these five question groups, collectively, the team developed insights about people’s perspectives on the most pressing issues regarding environmental pollution, their ideas on how to solve these issues, the hotspots where these issues are more prominent, their willingness to participate in creating a solution and the demographics of the respondents. In addition, substantive connections across these perspectives were generated in order to gain a deeper understanding.

Once the data was collected, co-designers started listening to the tape recorders, transcribed them from tapes to sheets and cut out unnecessary words or phrases in order to prepare them for study in the data analysis stage.

While understanding that analyzing a vast amount of qualitative data would not be an easy task, the co-designers rolled up their sleeves and went in for the exciting challenge.

After familiarizing themselves with the data, the team started to break down the conversations to its constituent parts and categorize these parts in topics. Four main topics that derived from this activity were: Air pollution, Waste, Lack of Green Spaces, and Unplanned Buildings.


During these series of workshops about data analysis, we’ve used different methods to classify the responses from citizens in order to dig down to the core of the problems. This process has opened many doors for us to start building the prototypes in the next phase. – says Elvira Thaqi who is part of the co-design team.

Two topics that the respondents were most concerned about were: air pollution (48%), and waste and garbage (41%).

According to the respondents, air pollution is mostly caused by the proximity to the coal-ignited Kosovo B power plant, and the high intensity of traffic, especially in the motorway that transits through Fushe Kosove/Kosovo Polje and connects the capital city of Pristina to several cities across Kosovo. 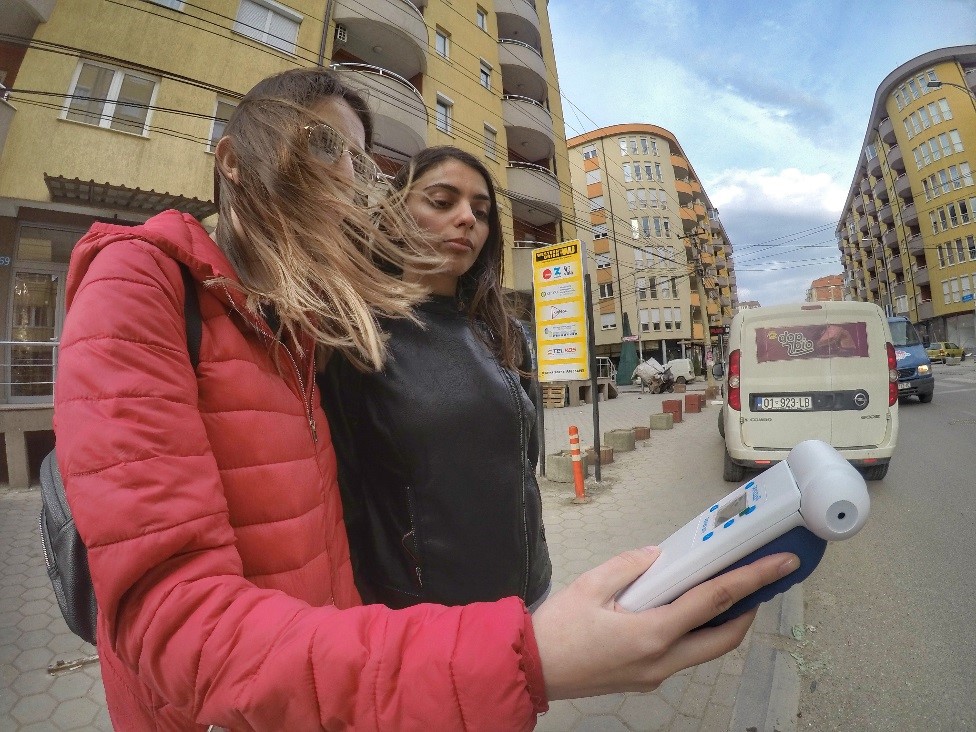 “I think that old cars, trucks and households igniting coal for heating, especially during winter season are the main pollutants in Fushe Kosove/Kosovo Polje. I think it all breaks down to central institutions’ inability deal with and penalize the culprits – says a resident.

On the other hand, waste and garbage issue is largely caused by people’s tendency to dispose garbage in undesignated areas and occurs mostly in the neighborhoods where there is high density of population.

Moreover, while most of the respondents were highly frustrated with the situation of environmental pollution in their municipality, 69% expressed their willingness to contribute in producing solutions pertaining to these problems.


“I would definitely want to help in creating a solution to this chaos. Anything that is initiated, I would like to be part of that. We live here. I send my kids to school here. I would want them to live in a healthier environment” says a respondent.

After, the data were separated into topics, the coding and categorizing stage was initiated.

Finally, to validate the qualitative data generated from the consultations, the co-designers decided to measure the air quality in Fushe Kosove/Kosovo Polje. During the span of one week, the team went out in the neighborhoods where they collected the responses to check the levels of different pollutants (PM2.5, PM 10, NO2, O3, CO2).

The results were as follows: 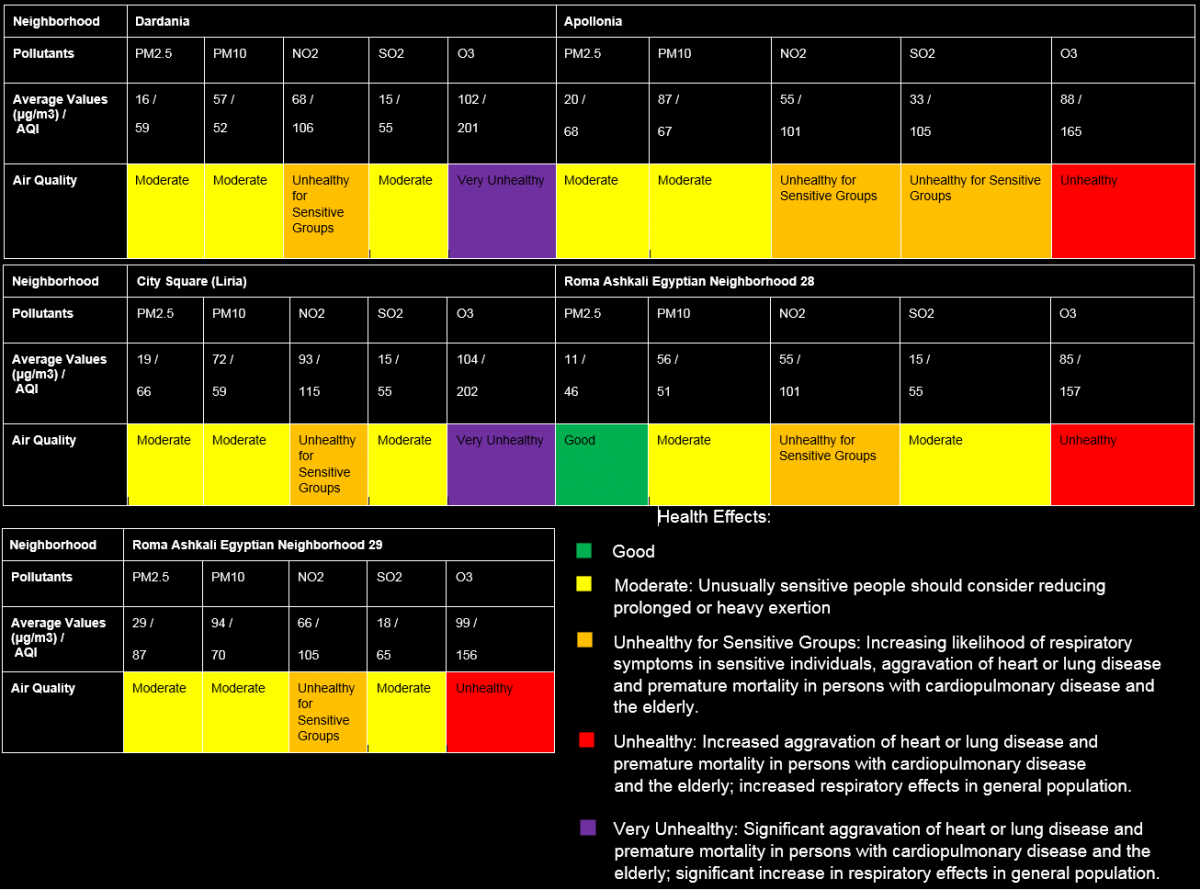 The data analyzed along with the air measurement will be used for the 3rd phase of co-design - generative prototyping. A series of co-creation workshops will take place and will involve brainstorming solutions and transforming these ideas into tangible outcomes. Different stakeholders, including community members, municipal authorities, institution officials, will also provide their expertise in generating these prototypes.

* References to Kosovo shall be understood to be in the context of Security Council Resolution 1244 (1999).