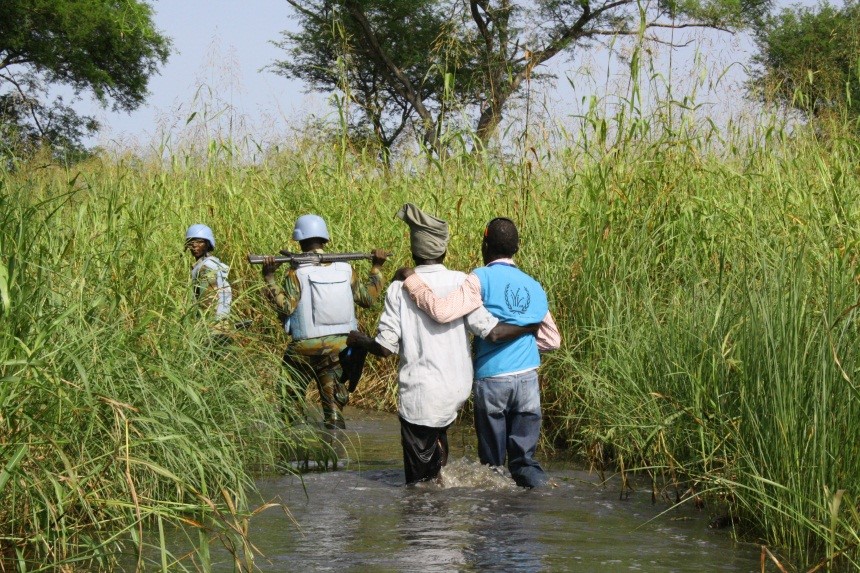 Solomon Ayiko (right), UNV Relief, Reintegration and Protection Officer, with protection patrols, following a road used by women to collect firewood and charcoal where incidents of SGBV are common. An IDP is holding Solomon to help him walk in the deep water. (Melanie Moore/UNV, 2016)

How to remain human in the face of extreme suffering

My role as a UN Volunteer Relief, Reintegration and Protection Officer with UNMISS is to strengthen coordination among the different humanitarian actors in order to mitigate the risk of violence. My work also involves engaging with leaders from IDP communities to address inter-communal tensions, and to support local confidence to build community resilience and a peaceful co-existence.

Bentiu, South Sudan: When fighting broke out in South Sudan in 2013, many civilians were killed and thousands of people sought protection at the UN base in Bentiu, with a large influx of internally displaced persons (IDPs) to the Protection of Civilians (PoC) sites of the United Nations Mission in South Sudan (UNMISS). This posed serious challenges to the management of the sites scarcity of space and resources, an increase in inter-communal tensions, looting and attacks to humanitarian assets, and increased sexual and gender based violence (SGBV).

My role as a UN Volunteer Relief, Reintegration and Protection Officer with UNMISS is to strengthen coordination among the different humanitarian actors in order to mitigate the risk of violence. My work also involves engaging with leaders from IDP communities within and outside the PoC sites to address inter-communal tensions, and to support local confidence to build community resilience and a peaceful co-existence.

There are eight community-based organizations (CBOs) inside the PoC site in Bentiu that actively support IDP communities. I support these CBOs through capacity building and mentoring of their leaders, helping them to become agents of social change who look for sustainable solutions to local socio-economic and political realities.

The Unity of Women (Matman) group, for example, consists of 68 women who decided to support the most vulnerable IDPs residing in the PoC site. They risk their lives when they go to collect firewood for their families. Nevertheless, they decided to share part of it with women and men who are blind, disabled, elderly or sick, or to fetch water for vulnerable families who have no one to support them.

The 30 young men and women members of the Women Vision CBO are actively engaging in protection activities, including running child protection and child-friendly spaces within the PoC site. Other volunteers are dedicated to supporting SGBV cases, and some are engaging youth in a trauma healing dialogue as a mean to rebuild broken relationships and collectively develop mechanisms for a peaceful co-existence.

While I have gained valuable professional experience in the coordination and facilitation of complex humanitarian assistance operations, one of the most valuable things I have learnt is how to remain human in the face of extreme suffering, and grounded in the pursuit of the ideal to alleviate the suffering of others.

Bio: Solomon Ayiko (Canada) studied Global Studies and majored in peacebuilding, with a Masters degree in Human Security and Peacebuilding. Before joining the UN, he was Executive Director of Peace for All International, a Canadian not-for-profit organization he founded in 2006, where he promoted local perspectives of peacebuilding and local ownership as sustainable solutions.