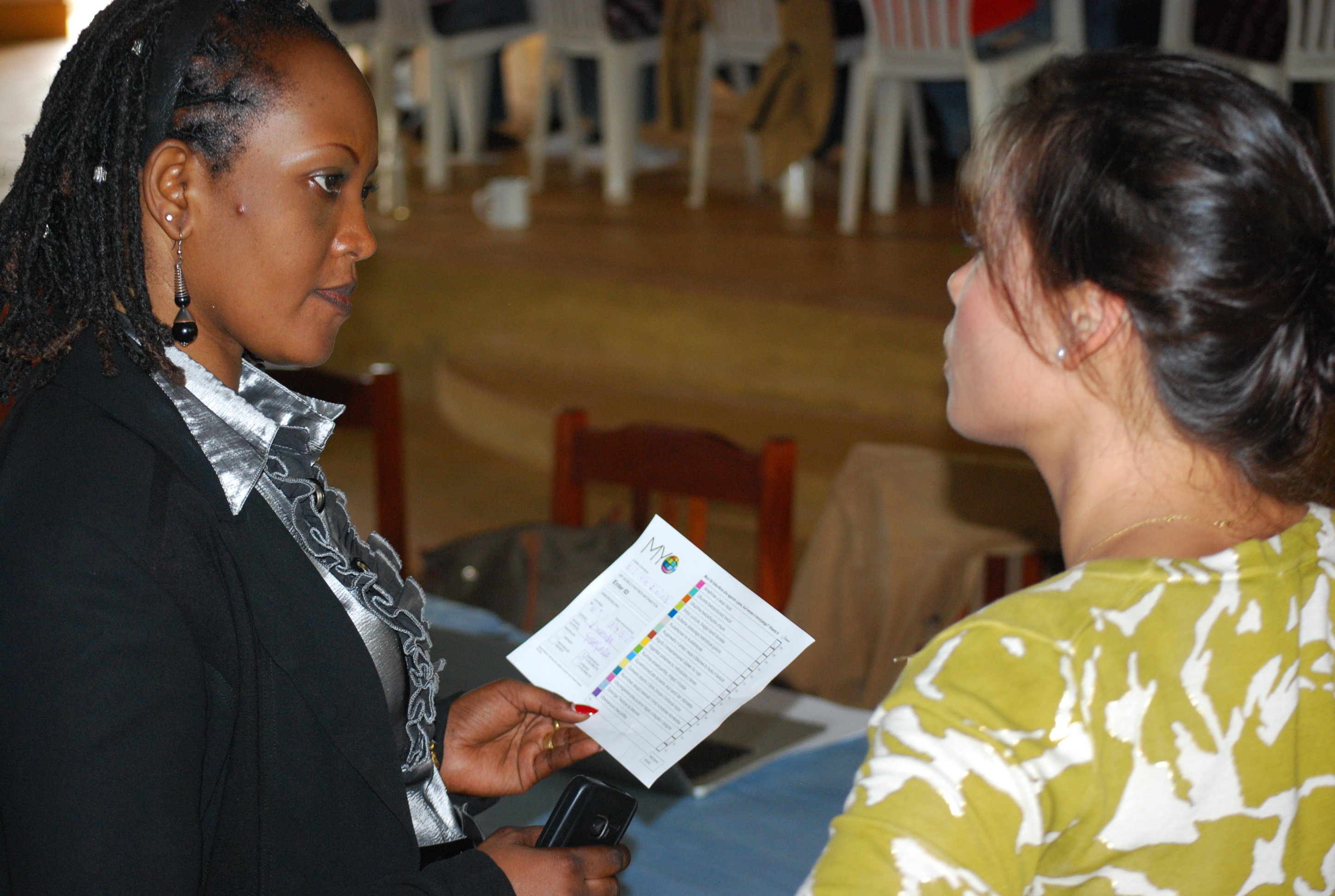 UN Youth Volunteer Aylin Schulz van Endert (right), from Germany, talks about the MY World Survey to a district coordinator of the National Youth Council in Rwanda to help raise the voices of youth in the national post-2015 consultation. Her volunteer assignment is fully funded by the Government of Germany. (UNV/Ivan Dielens, 2013)

Young people under the age of 30 make up nearly 65% of Rwanda’s population and constitute the group most likely to volunteer. Therefore it is essential to ensure that these voices are captured when discussing the post-2015 agenda and future development goals.

Kigali, Rwanda: In cooperation with 22 other African countries, the One UN in Rwanda held consultations in order to formulate a nationally owned post-2015 development agenda. The objective of the consultations was to stimulate an inclusive, bottom-up debate on the post-2015 development agenda. The idea was thus to facilitate a visioning process, which is based on peoples experiences and ideas for the future of the world they want to live in.


Young people under the age of 30 make up nearly 65% of Rwandas population and constitute the group most likely to volunteer. Therefore it is essential to ensure that these voices are captured when discussing the post-2015 agenda and future development goals.

As a member of the taskforce team, I was responsible for incorporating the voices of youth and exploring the role of volunteerism in the process. I ensured that youth were one of the four focus groups of our consultations. I also coordinated and guided the organization in discussions with youth. This included the format, agenda, partners, logistics and budget of events. To ensure that the results of these events were collected, documented and analyzed, I established a close cooperation with the National Youth Council and the Ministry of Youth and ICT.

Getting the support of national organizations is vital when reaching out directly into communities and drawing the digitally disconnected, illiterate and poorest communities into the global debate. I was able to draw upon the networks of volunteers working on the ground in order to achieve wide community outreach.

During our qualitative consultations with the focus groups, we reached 400 youth in the four provinces of Rwanda. We also distributed 40,000 ballots of the UN MY World Survey in all 30 districts, giving digitally disconnected youth a voice.


Similarly, we could count on the energy and commitment of UN Volunteers and staff from all UN agencies, who volunteered their time in order to make the consultations a success.

Working as a volunteer on this project is a very rewarding experience, as it allows me to work with the people who are directly impacted by poverty and to act as a conduit for their wishes, concerns and aspirations for the new post-2015 development agenda.


In May, UNDP headquarters sent a film crew from their post-2015 team to Rwanda, in order to capture how, for the first time in its history, the UN is opening up a global debate and reaching out to the people, who are directly impacted by poverty and injustice.  Volunteers supported the team by identifying and traveling to film locations and through advising on potential characters for the film. Because UNV has such a large global network of national and international volunteers and channels of dissemination, I connected UNDP to UNV to explore a possible collaboration.


s a result, UNV has taken the lead in releasing the video, which is branded as a UN Development Group product; UN Secretary-General Ban Ki-moon is the featured UN spokesperson. The video can be viewed here: http://bit.ly/14VsDBe

Bio: My name is Aylin Schulz van Endert and I am from Berlin, Germany. My assignment as a UN Youth Volunteer with UNDP in Kigali, Rwanda, is funded by the Government of Germany. I have previously worked for UNDP Swaziland and the UN Department for Economic and Social Affairs. In Rwanda, I will be supporting the country consultations on the post-2015 Development Agenda as well as post Rio+20 follow up and MDG review related activities, with a particular focus on youth-related issues.