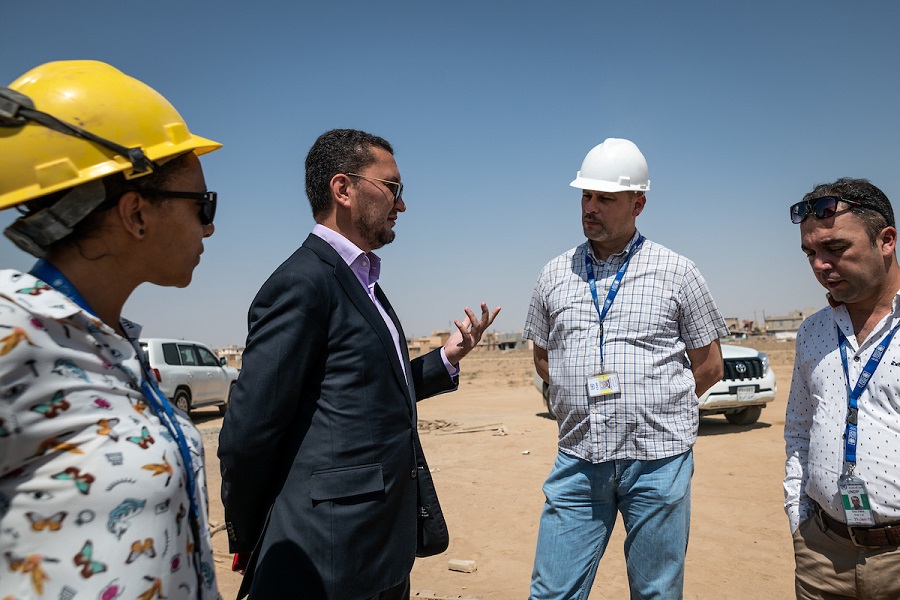 After the war against the Islamic State of Iraq and the Levant (ISIL), a vast part of Iraq was destroyed. Fifteen UN Volunteers, all experienced engineers, are collaborating with the United Nations Development Programme (UNDP) in Iraq to help support the huge reconstruction effort needed in the country.

The war against ISIL left Ninawa Governorate, the city of Mosul and many surrounding villages reduced to rubble. Houses were damaged, the supply of water and electricity was cut, schools were destroyed, bridges bombed, and roads were paved with grenade holes.

Fifteen UN Volunteers, all experienced engineers, are collaborating with UNDP Iraq to help support the huge reconstruction effort needed in the country. They are assisting the UNDP project Funding Facility for Stabilization (FFS), with the aim of helping displaced families return home safely. A lot of work is needed because internally displaced persons (IDPs) are going back to their cities and villages. By the end of April 2018, over 3.6 million Iraqis had returned home.

UN Volunteer Phub Tshering, an electrical engineer from Bhutan, had16 years of work experience as an engineer in his home country, before arriving in Mosul in 2017.

Phub follows up and oversees the rehabilitation of schools, hospitals and public buildings by verifying that the projects meet all the necessary requirements to move forward. He also carries out inspections of construction sites, materials and equipment and checking the quality of work done by local contractors.

In the last months, all territory has been liberated from the control of ISIL and the activities of the FFS have been expanded to the entire area. Twenty-five donors have contributed with more than US $787 million as of March 31, 2018 (Source: UNDP).

Since 2015, nearly 8,000 houses have been rebuilt or rehabilitated and 12,000 women have benefited from cash for work activities.

Mosul’s second largest water treatment plant now works again and provides clean water to half a million people. Furthermore, a major milestone was reached with the completion of Saidati Al Jamila Bridge, the first permanent concrete bridge to be restored in Mosul.

In East Mosul, 13,000 households (78,000 people) once again have access to electricity thanks to a new 8.5 km underground cable put in place by the project.

At Mosul University, 1,200 female students can use again their dormitories and go back to their studies.

Working in Iraq is a big challenge, especially since persistent political instability and security issues make everything harder.

Despite these challenges, UNV engineers have never stopped working; not even during the political crisis that followed the referendum for the independence of Kurdistan in September 2017. “All the borders were sealed, the airport was closed and clashes started in Iraqi Kurdistan. At times, we had to cross 5 to 10 security checkpoints to reach our project sites,” Phub recalls.

Every time that a project reviewed by Phub’s team is approved and then implemented, UNV engineers feel proud of their work and celebrate. Sometimes these projects cost millions of dollars and impact hundreds of thousands of beneficiaries like the one that helped provide electricity to the entire city of Kirkuk.


I personally learned that the level of satisfaction we get from such volunteering assignments is enormous and incomparable to anything else. I’m getting the opportunity to help millions of people return home after the war and this is very motivating” --Phub Tshering, UN Volunteer Engineer with UNDP, Iraq