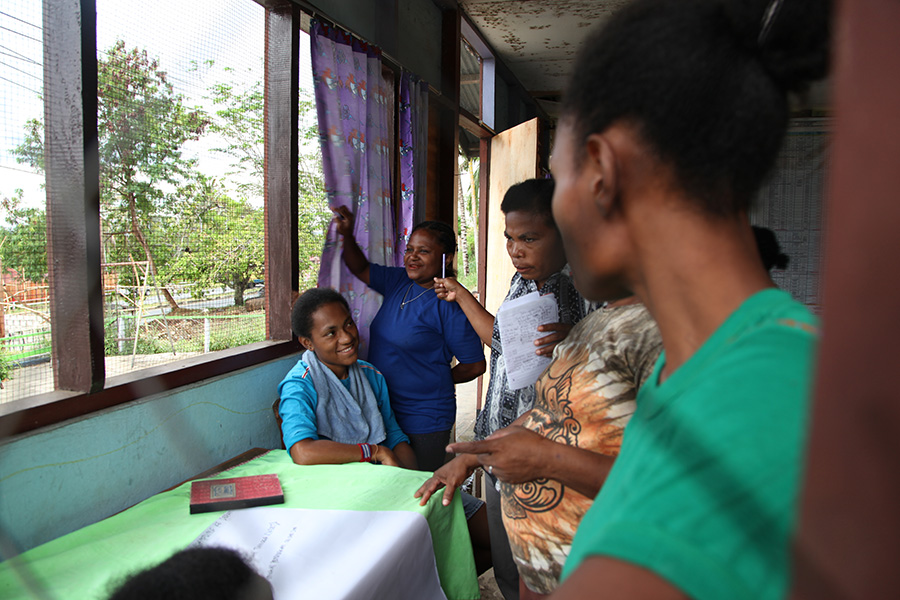 Participants in the caregiver sessions in Papua, Indonesia, offered through the Partners for Prevention programme.
(2017, UNFPA/Matthew Taylor)

Preventing violence against women and girls in Indonesia and Cambodia

Violence against women and girls is a global pandemic and gross human rights violation that must be addressed at the root cause in order to stop violence before it occurs. Two national UN Volunteers with the Partners for Prevention Joint Programme in Indonesia and Cambodia engaged local adolescents and their caregivers to transform negative gender norms, prevent violence and sustain these community based initiatives through volunteerism.

In Indonesia, two in five women experience some kind of violence in their lifetime. Growing up watching her childhood friends struggle with domestic violence, Grace, a national UN Volunteer in Papua Province, Indonesia, is highly motivated to contribute to preventing violence against women and girls. She is responsible for a project entitled “Reimay (Reaching Papuan Prosperity)”, which was initiated by the United Nations Population Fund (UNFPA), International Planned Parenthood Federation of Papua (PKBI), Institute for the Study and Empowerment of Women and Children (LP3A) and UNV with support from the Partners for Prevention Joint Programme (P4P).

The project engages adolescent girls and boys and their caregivers in Jayapura City, Papua, to create a supportive environment for families to learn building healthy and peaceful relationships based on gender equitable attitudes and norms. Through trainings and volunteer engagements, it also aims to raise awareness on violence against women and girls and strengthen the capacities of local authorities and civil society to prevent such violence.

Grace now witnesses changes in women and adolescents to stand against violence. “There was a female facilitator who was experiencing domestic violence”, she recalls. "When she first started attending the training sessions, she did not know how to deal with the situation and did not have the courage to speak up to her husband. After the training, she learned the serious repercussions of violence against women and understood that she had rights, which led her to finally leave her husband’s home and live a violence free life with her children. Now that she knows she has a choice, she wants to share her story with others who also experience violence in their lives to realize their rights and speak out against violence."

Working with about 150 adolescents and caregivers, Grace says there was a positive impact on herself too.

For me, volunteerism is about helping my community without asking for anything in return. However, the programme helped me hone my skills and develop my capacity to manage and advocate for violence prevention work. But the most important reward I received was that I became a new member of the community. I feel like I found a new family. --Grace, national UN Volunteer in Indonesia

Mathaboramana Kheang (Mana), is a national UN Volunteer Coordination Officer also assigned in the P4P programme in Cambodia, where it is reported that more than one in three Cambodian men reported perpetrating physical and/or sexual violence against a female intimate partner during their lifetime. Moreover, about half of men who committed rape did so as teenagers.

In order to build a new generation who live in healthy relationships without violence, a project entitled “Building Our Future: Developing Healthy and Happy Relationships” was initiated in Kampong Cham, a province with the second highest prevalence rate of domestic violence in the country. The project is implemented by the Ministry of Women's Affairs, the United Nations Population Fund, the P4P programme and UNV.

Mana was responsible for training local faciliators in a year-long participatory community session that engaged approximately 700 adolescents and their caregivers to change social and cultural norms around gender attitudes.

She believes volunteerism was one of the key elements to sustain the impact of the initiative since the facilitators were themselves volunteers. Additionally, programme participants and commune leaders conducted volunteering activities together and advocated for gender equality and prevention of violence against women and girls to encourage other community members to take action. “Through volunteerism, people can contribute to sustainable development because a volunteer's work is driven by a strong commitment to make change, not money,” she says.

Mana notes that many participants and facilitators have undergone positive and fundamental changes in attitudes and perceptions toward gender equality. Furthermore, they were committed to continue sharing knowledges and skills gained from the programme to their family and other people in the community.

Though investment in primary prevention takes a great deal of time and effort, I am optimistic that a changed heart and mind can have a long lasting and positive impact on society. In fact, the programme also made me contemplate my own daily interactions with people and how socio-cultural norms shape our way of thinking. It gives me a deeper understanding of Violence Against Women & Girls, gender equality, and positive parenting skills which I can apply at home and share with other people around me. --Mana, national UN Volunteer in Cambodia

Commitments by Mana and Grace in approaching violence against women and girls are supporting the beginning of new, healthy relationships within their communities, which encompass mutual respect and reject violence.

About Partners for Prevention:

Partners for Prevention (P4P) is a United Nations (UN) joint programme working to prevent violence against women and girls in Asia and the Pacific. Based on its ground-breaking research, the UN Multi-Country Study on Men and Violence in Asia and the Pacific (2013), P4P promotes and supports violence prevention initiatives and policies. Combining the strengths of four UN agencies – UN Development Programme, UN Population Fund, UN Women and UN Volunteers – with governments, civil society, and support from the Australian government, P4P programmes transform social norms and practices to prevent violence before it occurs. P4P’s work supports the Sustainable Development Goal to achieve gender equality and empowerment of all women and girls by 2030.