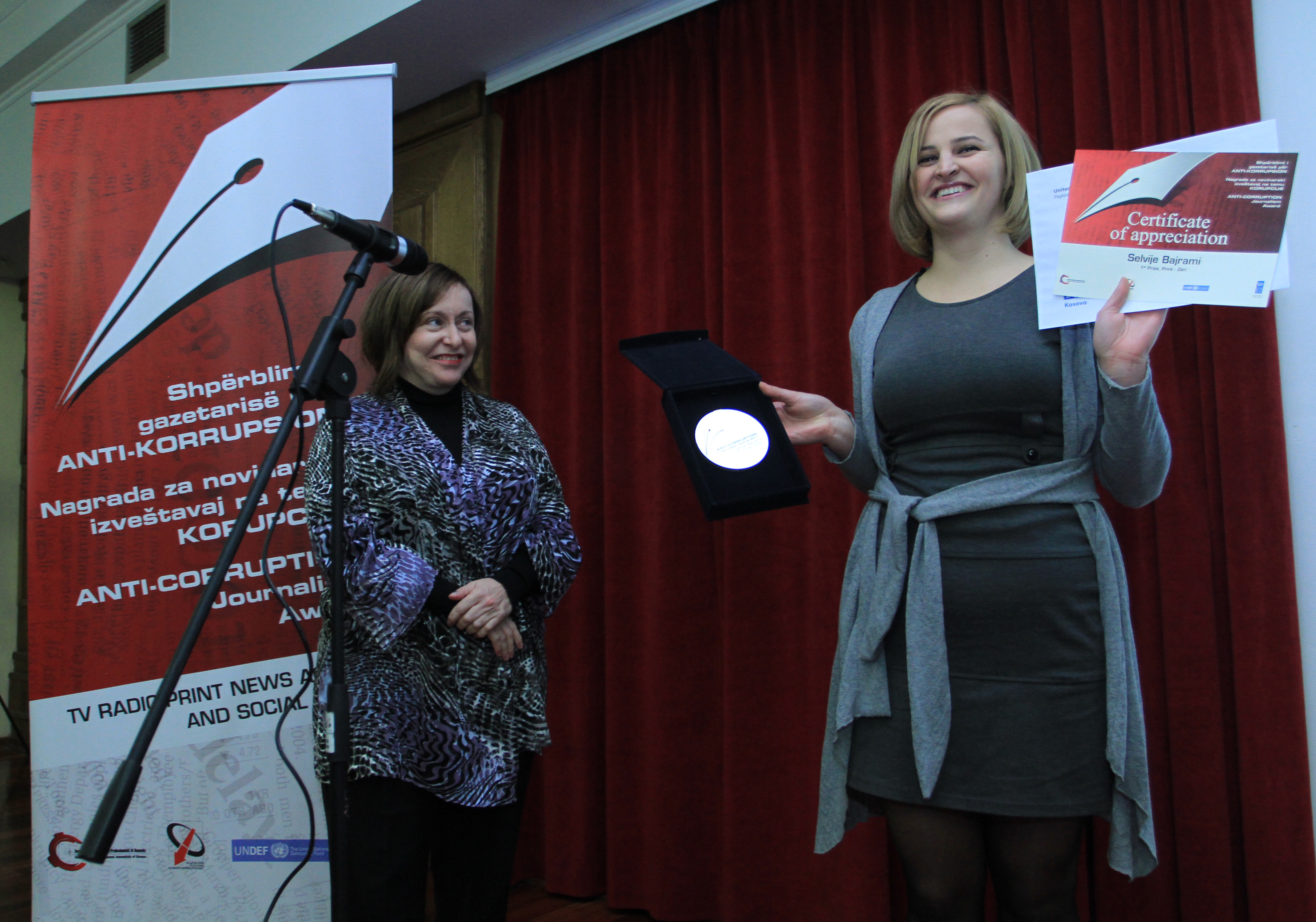 One of the major problems hindering the development of Kosovo is corruption. Serving as a UNV Programme Analyst for Democratic Governance with UNDP, I helped organize the Anti-Corruption Journalism Award, in support of investigative journalism for transparency.

Pristina, Kosovo: I am Hiroko Oda, a UN Volunteer from Japan under the Hiroshima Peacebuilders Center (HPC) programme. I organized the Anti-Corruption Journalism Award on 9 December 2011, marking International Anti-Corruption Day together with my colleagues at the United Nations Development Programme (UNDP) where I serve as a UNV Programme Analyst for Democratic Governance.

One of the major problems hindering the development of Kosovo is corruption. According to the Corruption Perception Barometer of 2010 by Transparency International, Kosovo is ranked in the 112th place out of 183 countries and territories.

True development is possible only when the government is free from corruption and operates according to good governance principles. Corruption problems will not disappear overnight but I hope my work accelerates the efforts on anti-corruption.

The Anti-corruption Journalism Award is an annual event that has been organized by UNDP, the Association of Professional Journalists of Kosovo (APJK) and the Kosovo Anti-Corruption Agency (KAA) for the past 6 years in Kosovo, in support of investigative journalism on corruption for transparency. It has been awarded to the best stories about corruption matters.

The 2011 award ceremony, which I helped organize, was conducted in cooperation with APJK, KAA, the United Nations Children’s Fund (UNICEF) and some civil society organizations in Kosovo.

I planned the agenda, venue and equipment for the award ceremony, mobilized youth - with the support of UNICEF – to apply for the award, and coordinated efforts with partners and colleagues to prepare for the ceremony. It would not have been possible to hold the ceremony without the efforts of my colleagues Burbuqe Dobranja (Public Information Officer), Alexis Franke (Governance Programme Analyst) and Armend Muja (Communication Officer). I am truly thankful to them for their support to make a difference in Kosovo society.

The award ceremony was very successful. It brought together journalists, civil society leaders, government officials and international representatives. It awarded two prizes on the print category, two prizes on the television category, and one prize on the news agency category. Unfortunately, none of the applications for the social media category met the criteria for the award this time. The ceremony was widely broadcasted by the local media, spreading knowledge about anti-corruption efforts in Kosovo.

The awardees showed genuine happiness for having received an award, and expressed their willingness to continue with their work. They were warmly celebrated by their colleagues and friends who openly expressed their recognition. The ceremony truly encouraged the journalists to continue their valuable work.

At UNDP Kosovo, I am supporting matters related to governance at the programme level. I was part of the Kosovo delegation that visited the former Yugoslav Republic of Macedonia in July 2011 to learn about their experience in inter-municipal cooperation, which could be applied to Kosovo.

I am very glad of the opportunity to contribute to the development of governance in Kosovo, where the government is still young and needs support from the international community. It is a rewarding experience for me.