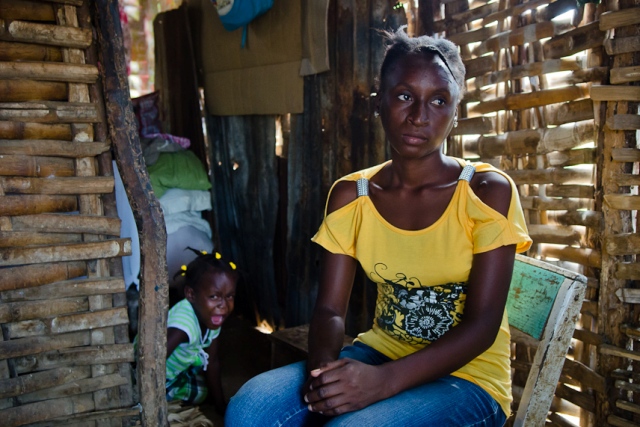 Joceline, almost 25, lives with her two children (8 and 6) and their father. She abandoned school at the age of 17, after the birth of her first child. Quite often she has nothing to eat during the day. She is considering going to Port-au-Prince to try her luck at a stable job as a servant. If she goes, however, her children will most likely become restavecs (a modern type of slavery). She dreams about having the means to take good care of her children, and to stop being abused by her partner. One day she would also like to return to school. (Agnieszka Napierala, 2013)

Telling the stories of teenage mothers

I would like their stories to be heard and their faces to be seen: to portray teen mothers in their living and working environments, collect their testimonies and show the consequences of early pregnancy.

Miragoâne, Haiti:  "When are you going to see your son?" I asked. "In less than two weeks, for two days." A weak smile crosses Michonda''s tired face. "It has been four months," she adds.

Five years ago, at barely 13, Michonda's childhood was stolen. She was brutally raped and became pregnant. While the rapist managed to escape justice, Michonda had to take up her new responsibilities. Forced to abandon school, she had to look for a job to be able to care for her child.

Four years ago she arrived in Miragoâne, 25 km from her native Petit-Goâve, leaving her little boy behind with her mother. Michonda works as a servant, starting her day at 4am and finishing around 11pm every day, seven days a week, for less than 40 USD per month.

Asked about her dreams, she mentions two things: she would love to have her son next to her, and be able one day to return to school. She cannot afford either.

Unfortunately every year the same tragedy touches thousands of Haitian girls: 29% of women in Haiti under the age of 19 have already had a child or are pregnant. Most pregnancies are the result of rape or other sexual abuses, including survival sex. The consequences are extremely serious: school drop-outs, mental health problems, family and social rejection, forced marriage, domestic violence, increased poverty and children sent away as restavecs (a modern type of slavery). The impact is also considerable on the well-being and functioning of society as a whole.

Some time ago I started meeting women, young girls and older women, who became mothers much too early. I wanted to listen to their life stories and look into their eyes, which often say more than words.

These women are one of the reasons I came to Haiti and joined the mission. Being aware of the daily struggles of Haitians is very important and motivational for my work.

I would like their stories to be heard and their faces to be seen by others as well, which is why I started the "My dream" project. The objective is to portray teen mothers in their living and working environments, collect their testimonies and show the consequences of early pregnancy.

I also ask women about their dreams. "These are usually very 'ordinary': return to school, have the family together, find a job, ensure a better future for their kids, stop being abused, be happy."

I truly believe that we should, and can, strive to make these 'ordinary' dreams come true.

Bio: Agnieszka Napierala has been based in Miragoâne (Haiti) since June 2012 as a UN Volunteer Electoral Coordinator. She graduated from the Poznan University of Economics and the Paris Institute of Political Science. For a few years she worked in marketing and then in development and management programmes with the European Commission. Up until June 2012 she worked as a UN Volunteer Election Advisor for the Peacekeeping Operation in Côte d'Ivoire (ONUCI). As a long-time human rights activist, she always tries to integrate civil society, to support it and to share experiences, and is most interested in social photography.