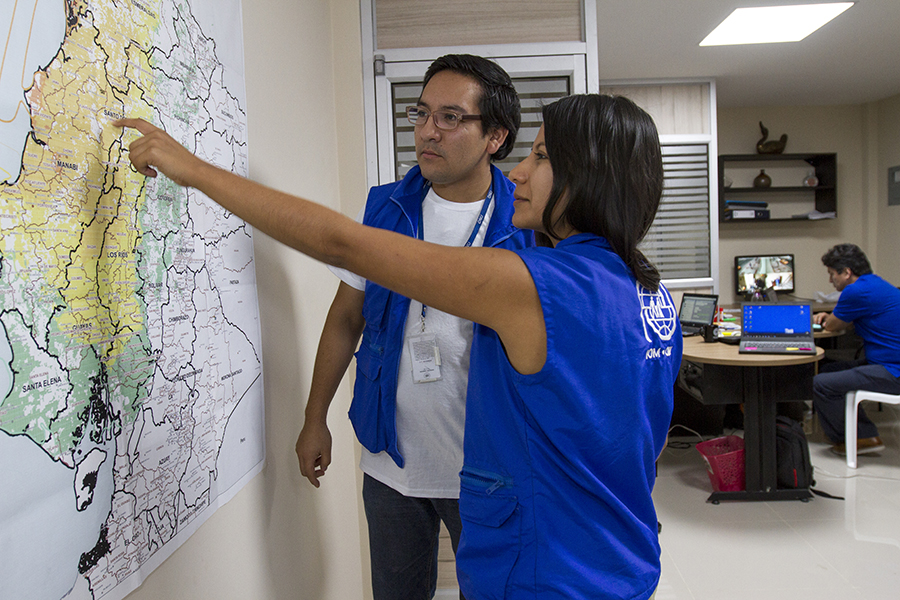 After the 7.8-magnitude earthquake that hit Ecuador in April 2016, affecting the lives of around 720,000 people and with almost 30,000 people having to seek refuge in temporary camps, UNV supported the work of UN agencies with the rapid mobilization of 29 national and three international UN Volunteers who worked on emergency response, most of them in the areas directly affected by the earthquake.

Within the first three weeks after the earthquake, UNV mobilized five UN Volunteers to immediately support the work of UN agencies after the earthquake. The rest of UN Volunteers were deployed during the three months after the disaster. They all worked directly with the communities and the people who suffered the devastation of the earthquake, focusing mainly on reaching families, especially women and children who lost not only their homes but also their livelihoods, helping build their capacity and supporting strategies for economic empowerment.

Since UN Volunteers can be quickly mobilized and can easily recruit local help that is familiar with the country context and priorities, volunteers in disaster response situations provide immediate relief as well as pathways to mid- and long-term recovery measures.


UNV provided us with qualified local UN Volunteers within one to two weeks of the request. This not only provided us with the immediate required response on the ground, but also with excellent opportunities for Ecuadorians to support in the emergency response and gain valuable UN and professional experience.

Sixteen national UN Volunteers serving with the United Nations Entity for Gender Equality and the Empowerment of Women (UN Women), and four with the International Organization for Migration (IOM) helped improve women’s participation and economic empowerment by training women as construction workers, and organizing mentoring and entrepreneurship activities that allowed women and their families to improve their living conditions.

Developing the capacity and awareness of Ecuadorian youth

Most of the national UN Volunteers working in the emergency response were young and well prepared Ecuadorians who came from the country’s major cities, and had little knowledge or contact with the realities of the people whose lives had been disturbed by the earthquake. Their involvement and efforts to help rebuild the affected communities allowed them to learn about their country’s problems, to gain valuable professional experience, as well as insights into the workings of the UN system.

Although most of the UN Volunteers who were recruited for the emergency have now finished their assignments, there are still four national UN Volunteers, two of them UN Youth Volunteers who continue to serve with the UNDP Ecuador “En Marcha” (On the move) programme for the economic recovery of small businesses. Three of them are using their skills as graphic designers to help entrepreneurs of the Manabí province re-launch their business to secure an income for their families and strengthen the economy of the region.

UN Volunteers complement the collective talent UN partners need to address humanitarian situations. The deployment of international and national UN Volunteers, who reside and work together with crisis-affected communities, is critical in ensuring the delivery and implementation of partners’ programmes, as UN Volunteers support capacity development, train, coach and mentor local counterparts in host countries.

UN Volunteers often go the extra mile, engaging directly with local communities, demonstrating by their actions the values of inclusion, gender equity and commitment to volunteerism as a means to achieve peace and social development.