Climate change is a serious threat to international peace and security. In many parts of the world, natural disasters force millions of people to become displaced from their homes and communities. In Sub-Saharan Africa, desertification, deforestation, land degradation and water scarcity, among other things, are obstructing peace and development efforts. In countries most affected by climate crises, UN Volunteers support local communities and 'climate refugees', through meaningful contributions to peace and climate action initiatives.

Natural disasters displace three times as many people as conflicts

In 2018, natural disasters including drought, cyclones and floods forced almost 2.6 million people in Sub-Saharan Africa to flee their homes. This triggers competition over depleted natural resources which can spark conflict between communities or compound pre-existing vulnerabilities.

In West and Central Africa, the United Nations Volunteers (UNV) programme is at the heart of the climate action for building resilience to climate change and peace promotion.

In countries such as Senegal and Guinea Bissau, UN Volunteers promote peace by improving management of environmental challenges, supporting elections, enabling the rehabilitation of political authority and the promotion of democratic values and peace between communities.

Paul Frank Ekobena is a UN Volunteer Field Monitor with WFP Batouri, in Eastern Cameroon. His duties include supporting WFP operations, including coordination and supervision of distribution activities to beneficiaries, as well as preparing farmlands for agriculture.

In the Casamance in southern Senegal, soil degradation and salinization of water and crops are endangering food security. For Mamadou Lamine Coly, UN Volunteer Forestry and Environmental Engineer with UNDP, this can impact peace and development efforts in the region.

According to Mamadou, there is a link between peace, climate change, and volunteerism. He explains that one of the effects of climate change is the rising of water levels, causing the salinization of farmlands. Thousands of hectares (over 80,000 hectares since 1993) of fertile land became thus wasted in locations where farming is the main source of income for communities in Ziguinchor (Casamance). Mamadou explains that this is can endanger the peace process in this part of Senegal, and force people to emigrate.

Mamadou develops reforestation actions, through the planting of Avicenna Africana, a species whose purpose is to desalinize and protect rice fields. He also supports the installation of protective dikes to prevent the progression of saline groundwater and settling ponds for fish farming. 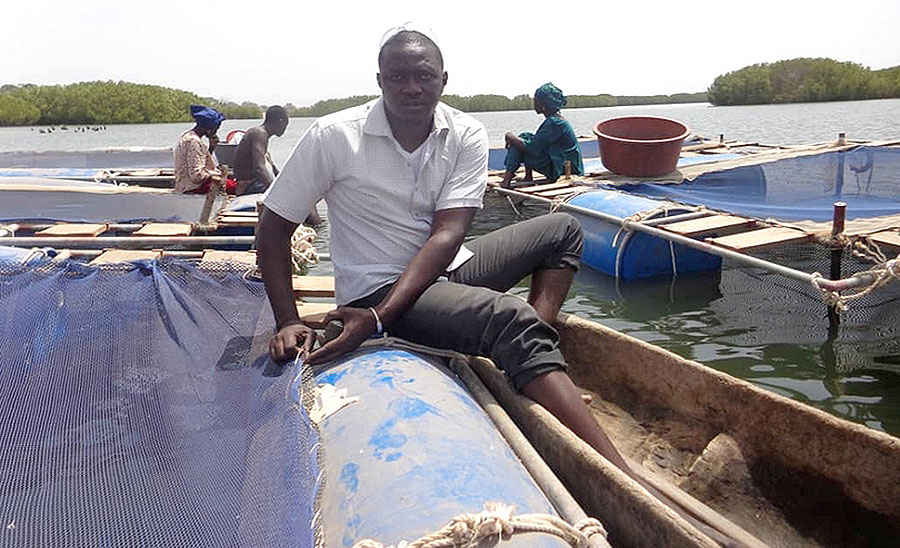 Mamadou Lamine Coly, UN Volunteer Forestry and Environmental Engineer with UNDP during a visit to communities in Ziguinchor, Senegal. (©UNV, 2019)

As part of the Project for Strengthening the Management of the Lands and Ecosystems of Niayes and Casamance (PRGTE), every year since 2016, Mamadou has helped communities to recover 60 hectares of land, including 40 hectares in Ziguinchor and 20 hectares in Sédhiou.

Furthermore, Mamadou is frequently invited to radio talks at Ziguinchor community radio Kassumay FM to raise community awareness on climate issues and share good practices on how they can better protect the environment. He also facilitates the implementation of production zones, monitors the behaviour of crops and distributes agricultural equipment, market gardening and irrigation in three communes.

According to the World Bank, climate change is the biggest threat to peace and development. It will push tens of millions of people to migrate within their countries by 2050 in three regions - Sub-Saharan Africa, South Asia and Latin America, which together represent 55 per cent of the developing world’s population.