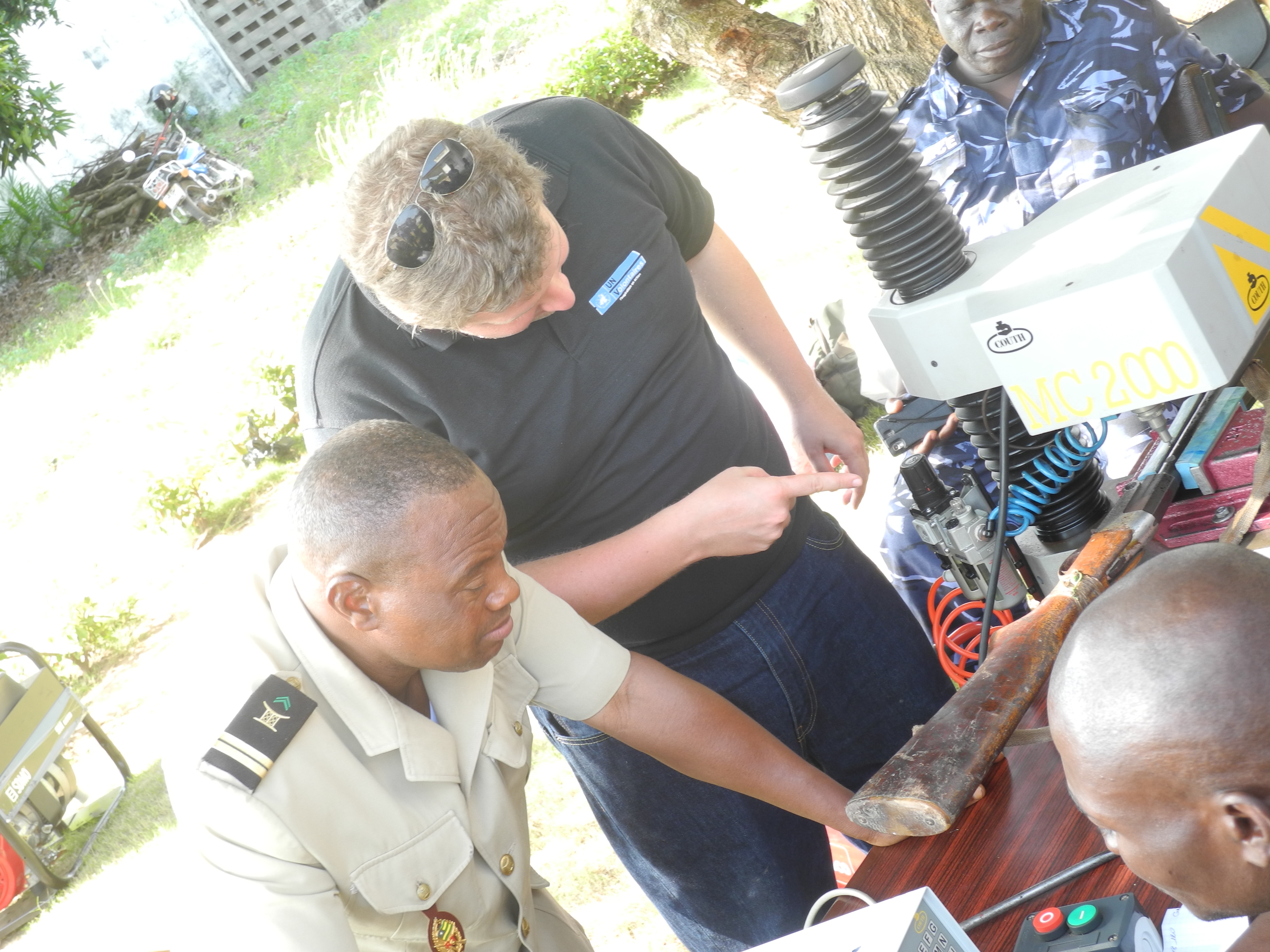 Karl Wagner verifying the positioning and field of a marking needle during arms marking exercises in Togo (UNV, 2014)

Volunteering for disarmement process in Africa

Based in Togo, I have been an International United Nations Volunteer&nbsp; (Security Sector Reform Specialist /Programme Manager) at the United Nations Regional Centre for Peace and Disarmament in Africa (UNREC) for the past 2 and a half years. Before my current tenure at UNREC I worked with the NGO Search for Common Ground on a conflict mediation project in Northern Tanzania, in partnership with the Tanzanian National Police.

Lomé, Togo:  Based in Togo, I have been an International United Nations Volunteer (Security Sector Reform Specialist /Programme Manager) at the United Nations Regional Centre for Peace and Disarmament in Africa (UNREC) for the past 2 and a half years. Before my current tenure at UNREC I worked with the NGO Search for Common Ground on a conflict mediation project in Northern Tanzania, in partnership with the Tanzanian National Police.

UNREC is the United Nations Office for Disarmament Affairs regional presence for Africa. It is mandated to assist countries in Africa upon their request with all aspects of disarmament, practical arms control initiatives and non-proliferation, including small arms, other conventional weapons and Weapons of Mass Destruction.

As the Security Sector Reform Specialist /Programme Manager my role has been to assist the Director of UNREC in developing and implementing tangible small arms and light weapons (SALW) projects across Africa and ensure that international best practice standards are met throughout in order to ensure the quality of our delivery. In addition, I assist in monitoring and reporting current arms related situations and trends. This reporting contributes to the design of projects which in turn has allowed us to start working in priority regions such as the Sahel and Central Africa.

Through my position, I have been able to conduct an assessment of the national small arms control authority of the Sudan, oversaw a trainings of trainers for the Togolese security services on maintaining law and order during electoral periods, facilitated the training of ammunition technical specialists on ammunition support to UN field operations, assisted in the organization and facilitation of numerous subregional and regional events notably on the Arms Trade Treaty and International Tracing Instrument, and took part in numerous workshops and seminars concerning monitoring and enforcing United Nations arms embargos and methods of streamlining United Nations arms control operations.

So far, my time at the Regional Centre has been rewarding. Working in a highly sensitive sector such as disarmament and arms control means I have the opportunity to work with very motivated professionals in many countries; these individuals are trying to address ever growing arms race and proliferation and its adverse outcomes.

In my portfolio, I help determine the effective implementation of relevant aspects of the International Small Arms Control Standards (ISACS) and the International Ammunition Technical Guidelines (IATG). It has been inspiring to see Member States innovative efforts to support weapons and ammunition security measures for the benefit human and national security.

In recent months my work has expanded to introducing the ISACS-Assessment Tool to disarmament practitioners within the region, developed by the United Nations Institute for Disarmament Research within the Centres programme activities in the Sahel region, with a focus on Mali where a team of UNREC national and international UN Volunteers are working side by side, sharing offices with experts and staff of the National Commission for Small Arms.

The approach to embed UNV experts with government partners is relatively new in the field of disarmament, not the least because of the sensitivity of the subject. In Mali, where the national commission is led by a very motivated woman, who is a Brigadier General of the army, it has been a success and I am proud to have been part of this initiative, which brings highly motivated disarmament specialist together with national disarmament experts and officials to jointly implement various practical disarmament programmes.

In the future UNREC intends to assist Member States in supporting numerous activities were UNVs will be central in their implementation such as SC RES 1325, Disarmament Education, numerous WMD non-proliferation activities and of course countering the spread of small arms and light weapons.

Before my time with UNREC ends in a few months, I hope to be able to further strengthen the link and synergies between disarmament and volunteerism, as they have been developed between UNREC and the UNV programme.

Disarmament, arms control and non-proliferation are critical to peace and security work and there is room a larger role volunteers can play, at home or abroad, on the ground or on-line.

Bio: Finnish national, with a BA Honours in Development Studies and Politics from School of Oriental and African Studies and an MPHIL in African Studies from the University of Leiden. Prior experiences in Conflict Resolution and Security Sector Reform in Northern Tanzania, Political Research in Namibia and mandatory military service in Finland. My volunteer programme is funded by the Government of Finland.