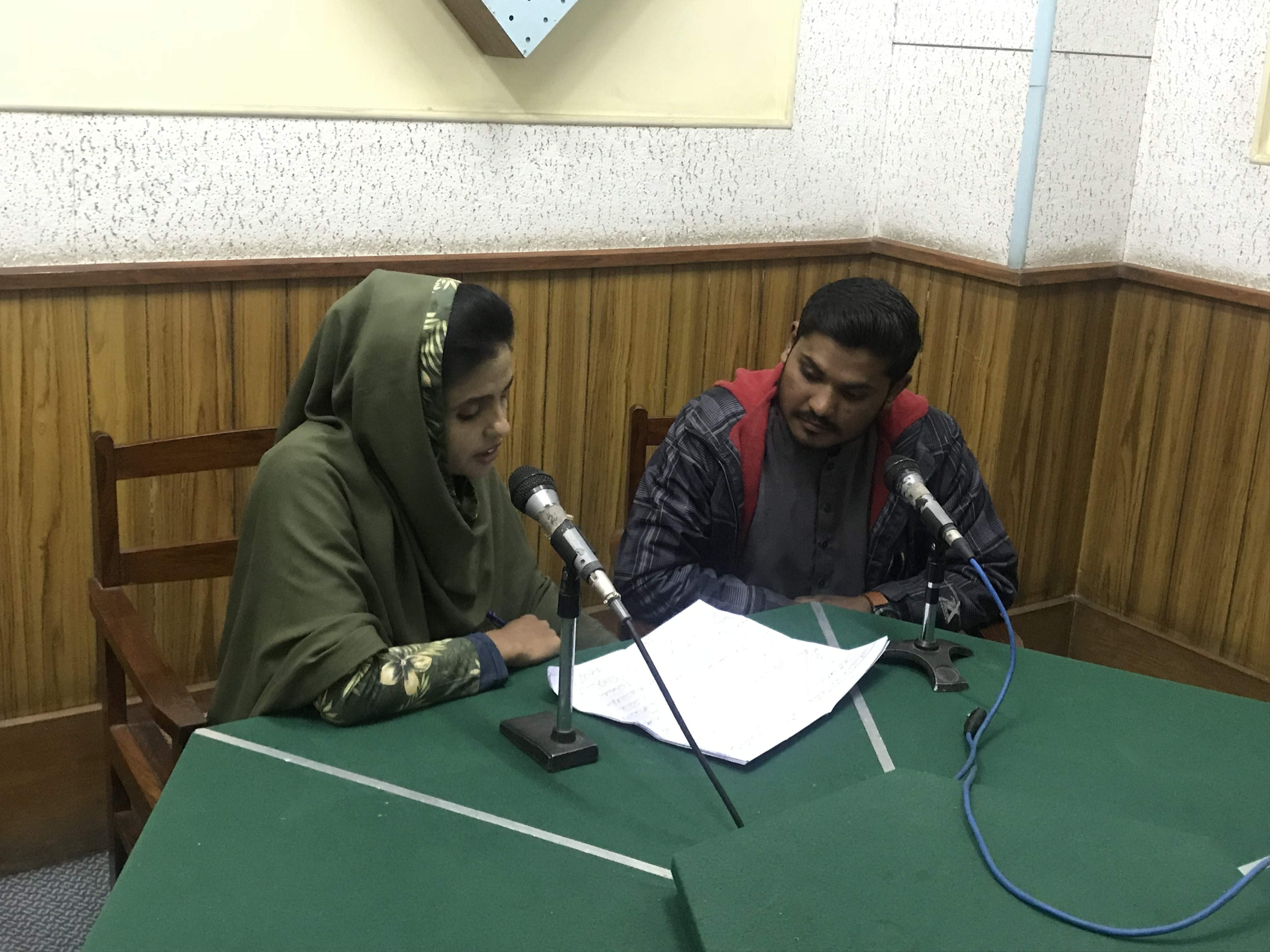 Community volunteers producing radio programmes on issues of women and youth as part of a UNV Pakistan and UN Women project.
UN Women

Volunteers continue to reach out through community-based radio across Pakistan

This phase of the project engaged four community volunteer groups from Khaizi, Hazara, Sariyab and Nawa Killi, to develop radio programmes. In total, 35 female and 25 male community volunteers were trained on ICT, radio production, script writing and broadcasting and ran the community radio for the duration of one year.

On average, one radio programme was produced every 2-3 weeks. In total, 15 radio programmes were developed in one year and aired on FM101 during prime-time hours. An estimated 160 to 250 listeners tuned in for each programme.

The volunteers used radio as a platform to project their voices on various issues faced by their communities. They discussed topics related to gender equality and empowerment, the importance of volunteering, health and education. Relevant stakeholders were interviewed and different solutions to the community problems were debated. The point of view of the volunteers were often supported by statements and interviews from government officials, UN representatives and members of the civil society.

Every content produced by volunteers, especially those related to women and gender, were picked up by the Pakistan Broadcasting Corporation (PBC). Their collaboration with CFRP team provided a unique opportunity for PBC to engage with UN agencies and broadcast content on programmes that they otherwise lacked resources to produce.

One of such programmes was on harassment of women at work place, where volunteers interviewed victims of assault and debated the gravity of the issue and potential solutions. This programme was picked up by Radio Pakistan, the first time a national broadcasting agency aired discussions on this topic. The BBC also picked up the story and as part of the coverage, interviewed one of the community volunteers.*

Volunteers utilized their creativity to produce material that were both entertaining and educational, including nine street theatre performances on community sensitization, social inclusion and gender.

Community theatre performances were arranged as part of ‘the 16 Days of Activism Campaign’ on preventing gender-based violence in Pakistan. The script for each performance was drafted by volunteers from the CFRP team with guidance from the UN Women and UNV office. One performance in Baluchistan was organized jointly with the University of Baluchistan’s Department of Gender and Development Studies where participants included students and faculty members of the university. Some of the story lines from the performances included lack of health facilities for women, women’s search for job opportunities and cases of physical and emotional harassments. These performances were first of its kind in these communities and were extremely well received by members of the communities.

Through the Community-Focused Radio Project, volunteers developed an innovative and powerful medium to highlight issues related to their respective community. The exceeded number of female to male volunteers in the CFRP team provided a unique opportunity to project issues related to women that are often neglected in media outlets.

As part of UN Women’s project for Empowering Marginalized Young Women and Youth through Volunteerism and Community Radio, CFRP is scheduled to be awarded with an Honourable mention during the UN SDG Action Awards on 2 May 2019 in Bonn, Germany. This award will recognize and give the spotlight to this highly innovative and impactful initiative by UN Women and the United Nations Volunteers programme. The high impact and creativity exhibited in this project is a step towards making Sustainable Development Goal 5, Gender Equality and Women’s Empowerment, a reality for people of Pakistan and a testament to the value of volunteerism in accelerating the achievement of the 2030 Agenda.