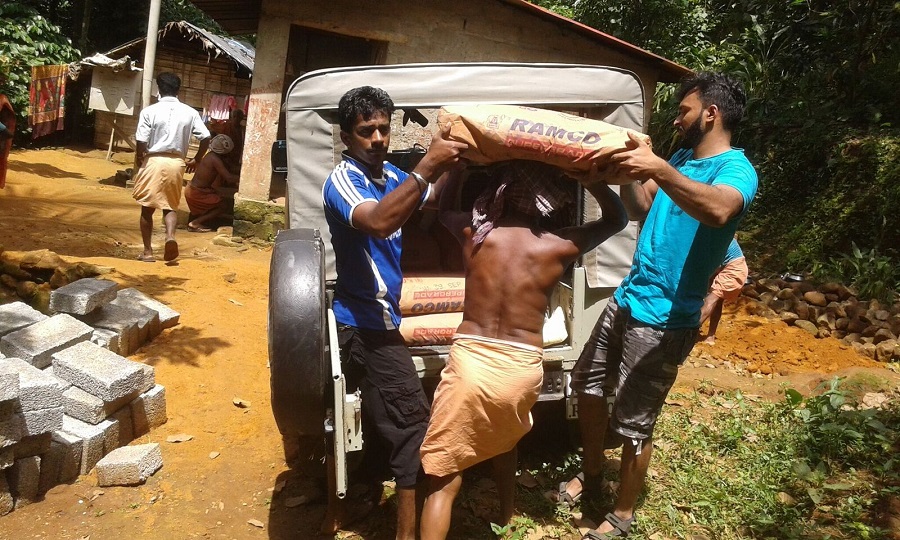 To build toilets, volunteers manually carried the material and loaded them into jeeps for transportation to 80 sites in Variyam. (UNV, 2016)

“The state authorities view the volunteers with Nehru Yuva Kendra as people who intervene to get the job done.” Toney Thomas is a national UN Volunteer District Youth Coordinator in the state of Kerala, south of India. One of the challenges faced by the state’s Ernakulam district is open defecation. The tribal population residing in the district continues to practice primitive traditional methods, including defecating in the open. This is a result of lack of education and limited connection with the outside world.

Toney talks about the situation, “Open defecation poses a serious threat to the health of children in India, with 188,000 children under the age of five dying of diarrhea in the country. I took the risk and without any financial support for advance planning, took on the challenge of mass mobilizing community youth volunteers.”

One of the hardest areas to reach is Variyam, a small tribal village nestled in thick forests.

Toney along with other community youth volunteers mobilized more than a hundred volunteers from the district to address the open defecation problem in Variyam.

India’s National Youth Policy of 2014 recognizes the need to empower youth and, through them, empower the nation as a whole. Youth in the 15 to 29 age bracket are 27.5 per cent of India’s total 1.1 billion population.

It is anticipated that by 2020, India shall have a demographic profile with a median age of 28. Intensely aware of demographic dividend for inclusive and sustainable development, the Government of India has invested in several schemes to encourage youth volunteerism in the country.

This has given way to ‘Strengthening Nehru Yuva Kendra and National Service Scheme’ project, a collaboration of the Ministry of Youth Affairs and Sports, the United Nations Development Programme (UNDP) and the United Nations Volunteers (UNV) programme. It aims to support Youth Volunteer Schemes in all 29 states of the country.

Toney’s volunteers are part of the Nehru Yuva Kendra project.  “We started an initiative called ‘The 100 volunteers, 100 toilets’. Every day for over a month, jeeps went on a long journey to Variyam transporting the volunteers and the materials to build the toilets.

Around 37 pits were dug entirely by youth volunteers without any help from the tribal community, while living in difficult and unfamiliar conditions, without electricity, piped water supply, sanitation facilities or phone connectivity.”

The youth volunteers, including 20 women, quarried sand and rocks from the riverbank, manually carried the materials on their heads and loaded them into jeeps for transportation to around 80 sites in the village.

The state authorities view the volunteers with Nehru Yuva Kendra as people who intervene to get the job done – we have volunteers at the grassroots level who truly make change happen.

The beneficiaries see these toilets as the beginning of positive change. A tribal resident says, “Earlier we used to go in the open where everyone could see us. And we had to take our children inside the forest if they wanted to defecate at night. That is not the case anymore.”