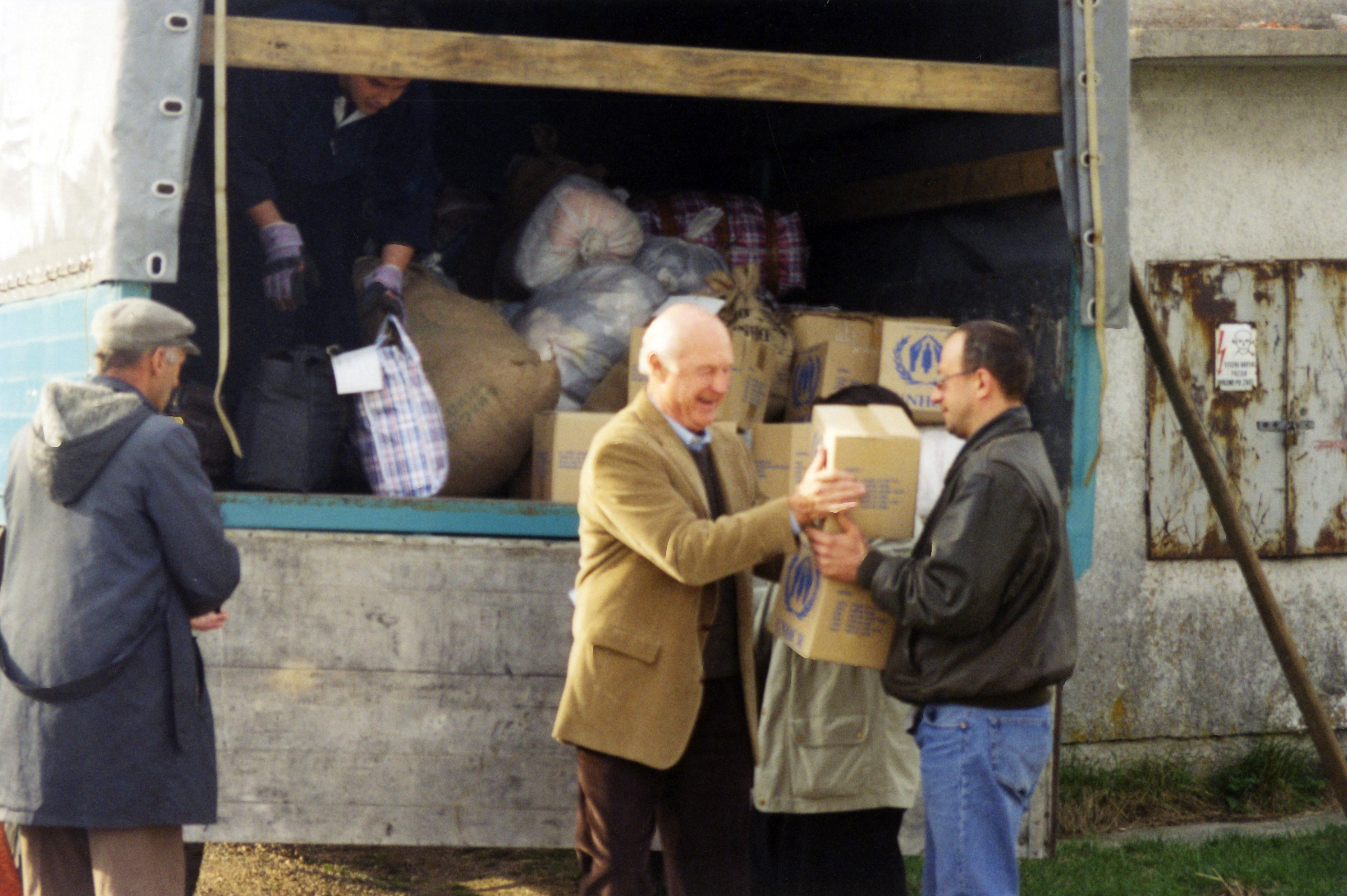 The most meaningful experience in my life

Being a UN Volunteer was one of the most meaningful experiences in my life so far, and, being in my eighties, I think that holds some weight. In the early 1990s, having raised a family, already at the end of a successful business career, and well settled into retirement, the unexpected excitement and humility of reaching out to truly touch peoples’ lives showed me that life can always bring the unexpected.

Being a UN Volunteer was one of the most meaningful experiences in my life so far, and, being in my eighties, I think that holds some weight. In the early 1990s, having raised a family, already at the end of a successful business career, and well settled into retirement, the unexpected excitement and humility of reaching out to truly touch peoples’ lives showed me that life can always bring the unexpected.

At a gathering with leaders from UNHCR and business associates, I had a conversation that led me to UNV.

By 1992 the Yugoslav Federation was falling apart. The war in Croatia led to hundreds of thousands of refugees and reawakened memories of the brutality of the 1940s.  But the news of these people’s suffering, loss of life and home, had moved quickly from the front page of US newspapers to perhaps an afterthought footnote. I was upset about this, and asked those I knew in UNHCR if there was anything I could do.

UNHCR was indeed looking for volunteers, through UNV, to assist in repatriation efforts in the Croatia. When I heard about this opportunity, I didn’t look back - I would be a volunteer.

I arrived, from Chicago via Frankfurt, in Zagreb on April 8th of 1999. Allied bombers were still flying missions over Kosovo and daily life in the region was tense wherever you went. I arrived five hours late, had a full security briefing and was swept into a car that took me on a four-hour mountain pass journey from Zagreb via Karenica (border with Bosnia) and finally to Knin.

Knin, located in the northern part of Croatia, the major town of the Krjina region, had been originally 80 percent Serbian ethnically, and during the war the Serbian Peoples Army cleared the Croatian Catholics (in three to five years) from the community and subsequently the Croatian Army cleaned the area of most Serbs. All of this involving some 250,000 poor souls.

Knin was the stronghold for the Serbs from 1990 onwards until Croatian forces captured it during Operation Storm in October 1995. The Operation became the largest European land battle since the Second World War and was a decisive victory for the Croatian army.

For me, driving through villages where houses no longer had roofs or doors and the streets and playgrounds were eerily empty, I realized that perhaps I had not really understood the impact of situation.

American pressure to end the war eventually led to the Dayton Accords of November 1995, which created self-governing entities within the area including Bosnia-Herzagovina, Slovenia, and Croatia. The Agreement put an end to all military confrontation; it was to promote peace and stability in the region and around the former Yugoslavia.

A peace settlement to fully implement the Dayton Accords was an agreement that aimed to bring about the return of all refugees resulting from the hostilities.

Volunteering is what you as a person make out of it. Upon my arrival in Knin I was assigned two staff personnel to help me find living accommodations and then I returned to the offices, reporting to the Field Director, a man from Bavaria, to be available for any jobs needed to be completed.

For the first few weeks UN personnel and I shared the duties of going out for runs for materials. But soon, it became clear that, through the promise of repatriation of Croatians, we needed to become more useful and assist in transporting people back from the Bosnian border to their homes in Knin and its surroundings.

Three or four nights a week we would drive to the Bosnian border and pick up Knin area residents that had been living in refugee camps in Serbia for three to five years. Those evenings we never knew what would be in store for us. Many people would see their former homes for the first time, and due to their being occupied or/ and obliterated would hardly recognize where they had grown up or made their lives before the war.

We received police escorts and the ceaseless expertise from young UNHCR professionals, who I will never stop admiring. But the actual taking these people ‘home’ became a major volunteer service to the community.

I have so many stories, and the faces of many of these displaced people are forever embedded in my mind. But one particular night stands out. We went to pick up around 40 people one May evening, and arrived back in Knin, with our police escort, when it was dark. All passengers, except one elderly lady with around 30 pounds of luggage, had been dropped off.

She could not recognize her own home and we were driving around for hours trying to find her house. Finally, after the police called it a night, we UN Volunteers and UN driver continued to wind through back roads with this woman, and were directed to a small dirt road by her frail frame. At the end of the road it was pitch black, no lights and only from the car headlights could we make out what seemed like a small farmhouse with no windows or doors. The woman insisted this was her home and jumped out of the car to “move back in”. I was very apprehensive leaving her there, but she insisted.

A few days later the driver and I went back out to the place to deliver a stove, and to check on the woman. To my relief, she came out of the ram-shackled shelter beaming, and in tow, were two more generations of her family.

How had they found her? What were they living off of? Overjoyed with just being back together, they were oblivious to the disaster around them.

Home is where the heart is, and Knin will always be in my heart.