My name is Yashaswini Mittal and I am a UN Volunteer with the UN Mission in South Sudan (UNMISS). I joined UNMISS in August 2019 as a Judicial Affairs Officer with the mission’s Rule of Law Section and have had some of the most memorable experiences of my life since then. I have had the fantastic opportunity to work closely with South Sudanese policy makers, senior security sector leadership, judges, prosecutors and defence counsels on several legal reform and justice sector initiatives.

Law school seemed to be a logical choice for me as I was an avid reader of history and early on in life, I became transfixed by how every positive social change, whether in my own country, India, or the world at large, could be traced to much-needed amendments in legal frameworks.

My love for history impacted me in another significant way—it led me to wonder about the UN, about how a world body was established after two devastating wars to bring peace and serve vulnerable communities. Therefore, I took up two internships with the UN during law school: one with the UN Refugee Agency (UNHCR) in New Delhi, and the other with the UN International Residual Mechanism for Criminal Tribunals (UN-IRMCT) in Arusha, Tanzania. I found both these experiences immensely enriching; I was sure that I wanted to work for the UN at some point in my career.

Once I completed my bachelor’s degree in law, I started working with the Government of India on drafting improved, evidence-based laws. I was tasked with engaging in strategic litigation to repeal more than 119 provisions of laws that discriminated against persons affected by leprosy and formulate a model law to eliminate this discrimination. This assignment convinced me that the law and its enforcement often reflect cultural and social mores, which need to be understood by lawyers proposing to change or amend established legal norms. I realized that I wanted to contribute to reforming laws in different countries, so that they reflected new world realities.

I, therefore, began connecting with UN officials who informed me about the UN Volunteer programme. I realized that by signing up to be a UN Volunteer, I could not only gain practical experience in the workings of UN but could also work in a new context, meet people from different parts of the world, and, most importantly, could perhaps support people who need it the most. This led me to apply and subsequently take up my current assignment with UNMISS.

I joined UNMISS in August 2019 and have had some of the most memorable experiences of my life since then. I have had the fantastic opportunity to work closely with South Sudanese policy makers, senior security sector leadership, judges, prosecutors and defence counsels on several legal reform and justice sector initiatives.

Just like in India, reforming the law in South Sudan also requires one to understand its cultural and historical contexts. By traveling to different parts of the country with judges, prosecutors and defence counsel to hold mobile courts, I have been able to develop an understanding of these contexts, an opportunity I am grateful for.

If I had to pick an assignment at UNMISS that stands out for me, it is working with the Parliamentary Committee on Human Rights to get South Sudan to ratify the UN Convention on the Rights of Persons with Disabilities. While the deliberations in the Parliament have been hampered by the COVID-19 pandemic, we are hopeful that more progress will be made in the coming months. In any event, I have found it deeply moving and educative to meet with disability rights groups and hold consultations on the need for ratifying this important instrument in South Sudan. --Yashaswimi Mittal, UN Volunteer Judicial Affairs Officer with UNMISS

Given my experience of working with persons affected by leprosy in India, many of whom also have disabilities, I was able to utilize my experience to assist South Sudanese law makers in their efforts. It felt like I had come a full circle.

For me, an ideal human rights lawyer is someone who doesn’t limit herself to practicing human rights in her work alone but extends her respect for human rights into every aspect of her life. At UNMISS, I have met several passionate colleagues (who are now also my friends), who live up to this ideal. I have also received crucial advice and mentoring at every step and have been encouraged to test new ideas. I believe that these experiences have contributed to immense professional and personal growth for me.

Being a UN Volunteer in a peacekeeping mission has taught me that there is no greater currency for a nation than sustainable peace and a legal system that ensures meaningful participation from every citizen. I am proud of being part of the UN Volunteer programme; it has given me a lot and I hope, in my capacity, I have managed to give back to the programme as well as the people of South Sudan. --Yashaswimi Mittal 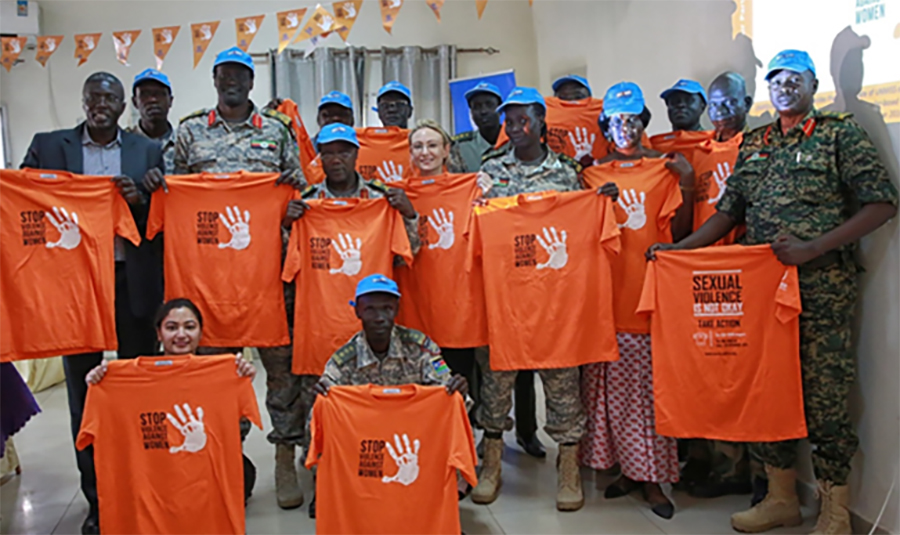 Yashaswini and her colleagues celebrating 16 Days of Activism against Gender-Based Violence with judge advocates from the Military Justice Directorate of the SSPDF. ©UNV, 2019