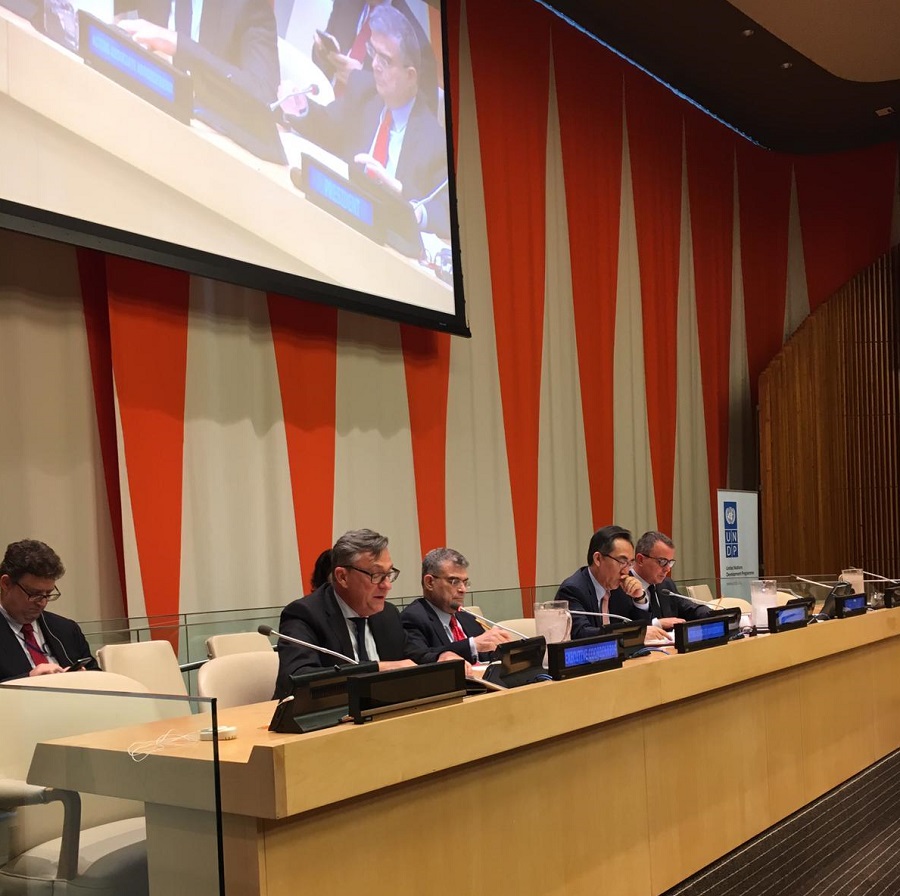 Olivier Adam, Executive Coordinator of UNV, (left), UNDP Acting Associate Administrator, Mourad Wahba, and President of the current Executive Board, H.E. Mr. Cho Tae-yul of the Republic of Korea presenting the UNV results at the Executive Board session in the ECOSOC chamber at the UN headquarters in New York.
(UNV, 2019)

UNV called ‘the jewel of the UN’ at Executive Board

The Executive Coordinator of UNV, Olivier Adam, presented the 2018 results of the organization to the UNDP/UNFPA/UNOPS Executive Board. In 2018, UNV completed a successful structural transformation, while continuing to mobilize UN Volunteers for peace and development and to promote volunteerism around the world.

In his introductory remarks of the UNV session, the UNDP Acting Associate Administrator, Mourad Wahba, stated that 2,286 UN Volunteers supported UNDP activities in 2018 and emphasized the importance of volunteerism as a powerful tool for governments and UN partners worldwide to realize the 2030 Agenda.

In the statement on UNV’s 2018 results, the Executive Coordinator, Olivier Adam, emphasised the strong performance in the first year of UNV’s Strategic Framework 2018-2021, even though it was also a year of transition for the organization.

UNV further fine-tuned its volunteer management business processes, reducing processing times and increasing efficiency; and it created new volunteer categories, covering community, event, expert and refugee volunteers. UNV launched its flagship publication, the 2018 “State of the World’s Volunteerism Report: The Thread that Binds – Volunteerism and Community Resilience”; and saw the adoption at the GA 73rd session of the Resolution on Volunteering for the 2030 Agenda for Sustainable Development. Institutionally, UNV professionalized and nationalized its country-level presence; and it decentralized its staffing structure, resulting in an overall cost decrease of 11% in 2018 compared to 2017.

Looking at the future, the Executive Coordinator highlighted UNV’s ongoing digital transformation; UNV’s role as the secretariat for the Plan of Action to integrate volunteering into Agenda 2030; and UNV providing volunteer talent solutions to UNDP, to the delinked Resident Coordinator Offices, and to UN Country Teams at large.

Statements were then given from Member States as follows:

Burkina Faso, India and Ireland emphasized the role of volunteers at grassroots and community levels in sustaining and advancing national and local development processes. Burkina Faso, Cameroon, Germany, Gambia, Rwanda and Senegal all highlighted UNV’s role in South-South cooperation; including UNV’s support to the African Union Youth Volunteer Corps and the ECOWAS Volunteer Programme in West Africa as well.

Rwanda specifically mentioned UNV’s support to the rollout of the YouthConnekt Africa Hub. Australia, Finland, Ireland and Russia noted UNV’s role in promoting the inclusion of persons with disabilities. Brazil and Mexico commended UNV for its promotion of innovation and technological solutions, including Online Volunteers.

Cambodia noted its partnership with UNV since 1992 and UNV’s support to its national volunteer infrastructure for youth employability and capacity development; Cambodia suggested UNV could support the pre-deployment training of Cambodian female peacekeepers.

Ireland noted the high level of UN Volunteers’ personal and professional satisfaction and highlighted the global-to-local impact this has.

During their statement, Australia announced its contribution of AUD 1.5 million over the next two years to fund UN Volunteer assignments focused on disability inclusion, gender equality and women’s empowerment, mostly in the Pacific, in addition to the core funding it provides to UNDP.

France highlighted its $1.3 million contribution in 2018, including for the Special Voluntary Fund (SVF) and for fully-funded UN Volunteers. Germany noted its €1.79 million SVF contribution, encouraged other countries to follow their example, and announced €1.8 million to support UNV’s Digital Transformation.

Finland noted that it funded its first UN Volunteer in 1974 and will recruit its 500th UN Volunteer this year. The Czech Republic stated that UNV is a priority multilateral partner and that it aspires to be a top-10 UNV partner. The Russian Federation highlighted the growth in numbers of its UN Volunteers and its new full-funding arrangement with UNV. And China noted that the areas of cooperation with UNV continue to expand.

Germany noted UNV’s role as convener for global debate on volunteerism (including Global South), in particular in the context of the Plan of Action for integrating volunteerism into the 2030 Agenda.

The Assistant Secretary-General for Human Resources Management, Martha Helena Lopez, noted that the UN Secretariat as a whole is the largest beneficiary of UN Volunteers, which are a key component of the Secretariat’s workforce, but also a talent pool for Secretariat staff, specifically for under-represented countries. Assistant Secretary-General Lopez emphasized UNV’s role in contributing to the UN Secretariat’s diversity, as it enhances opportunities for women, for youth, for nationals and for persons with disabilities to partake in the work of the UN. She also highlighted the importance of UNV’s common-service role across entities and pillars of the UN System, for instance through its support to joint programmes under the Spotlight Initiative, the Peacebuilding Fund and the Joint SDG Fund.

The Executive Coordinator, switching from English to his native French, thanked all speakers; committed to continue UNV’s work with regional organizations and other volunteer organizations under the framework of the 2020 Global Technical Meeting on volunteerism; thanked Germany for being an exemplary host for the headquarters of UNV in Bonn; and encouraged further contributions to the Special Voluntary Fund from all Member States.

The President of the EB, H.E. Mr. Cho Tae-yul of the Republic of Korea, closed the session by quoting that UNV is “the jewel of the UN”.