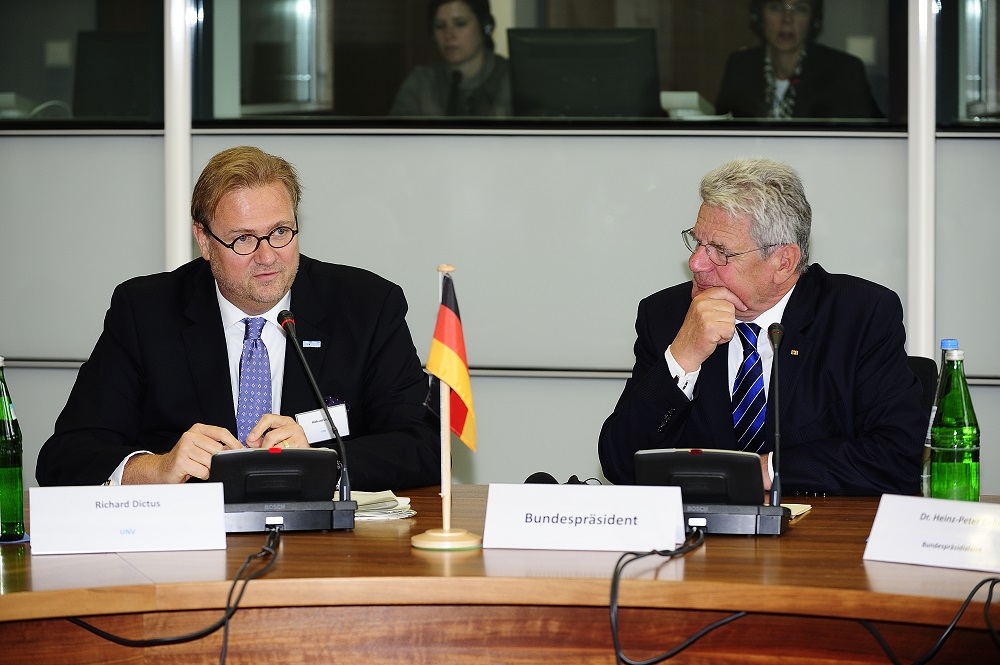 The German Federal President, Joachim Gauck, made history on 12 September by being the first German head of state to visit the United Nations (UN) Campus in Bonn.

During his visit, Federal President Gauck honoured the work of the United Nations shortly before the 40th anniversary of Germanys admission to the world organization. Both German states, the Federal Republic of Germany and the German Democratic Republic, joined the United Nations on 18 September 1973.

Richard Dictus, Executive Coordinator of the United Nations Volunteers (UNV) programme (the agency responsible for all UN buildings in Bonn), had the honour of welcoming the Federal President, along with Prof. Dr. Jakob Rhyner, United Nations Universitys Vice Rector, who is currently serving as the Chair of the Heads of UN Agencies in Germany.

Bonn is often referred to as Germanys UN City and has a particular focus on sustainable development. The UN Campus in Bonn comprises 18 of the 27 UN organizations in the country, with just under 1,000 staff members. UNV was one of the first UN agencies to make its home in Bonn - moving from Geneva in 1996. With nearly 160 staff members, it is the second largest entity in Bonn after the United Nations Climate Change Secretariat, which has over 500 employees.

During a special meeting with the heads of UN organizations, the Federal President was briefed on the important contribution that the UN in Germany is making to sustainable development - tackling climate change, working towards social inclusion and striving for poverty eradication.

Federal President Gauck stated during this meeting that "Bonn has become a real UN hub and I am glad that you all, staff from all over the world, are here in Bonn to work on these significant issues." The UN representatives and Federal President Gauck also touched upon the importance of integrating human rights into all aspects of United Nations development and peace efforts.

"From Bonn, the United Nations works on key questions of the future of humanity. They make a key contribution to suggesting options for action to the international community of states," said Prof. Jacob Rhyner, on the occasion of the Federal President's visit.

Richard Dictus, on behalf of all UN organizations in Bonn, explained, By the Federal Republic of Germany literally offering the 'space' for us to work on world issues, it contributes significantly to international efforts; for example in dealing with climate change. We also appreciate that Bonn has developed, with the openness to a growing UN community, into an international hub for sustainable development which has no equal."

A reception was held with UN staff members and the guest of honour, Federal President Gauck. In this intimate setting President Gauck addressed the audience by stating the historical significance of their work in the UN in Bonn within the context of Germany's 40-year contribution and member state status within the UN system.

The United Nations has had a headquarters in Bonn since 1951. In the summer of 2006, the UN Campus was officially opened, in the presence of UN Secretary-General Kofi Annan and German Chancellor Angela Merkel, with the "Langer Eugen" as the main building. From a handful of employees in the early days, the UN presence in Bonn has grown steadily since 1996 and now can be considered a UN family with an international workforce of almost 1,000 colleagues.

Currently, the UN is represented by 18 agencies in Bonn. The United Nations is represented Germany-wide by other institutions and liaison offices in Dresden, Hamburg, Berlin, Frankfurt and Nuremberg. All the Bonn-based UN organizations support the efforts of the Governments target for a sustainable future in the areas of climate change, social cohesion, land degradation, biodiversity, volunteer services, disaster preparedness, education, health, human security, and protection of species. This includes not only the sustainable use of natural resources and the mitigation of climate change, but also the global fight against poverty.