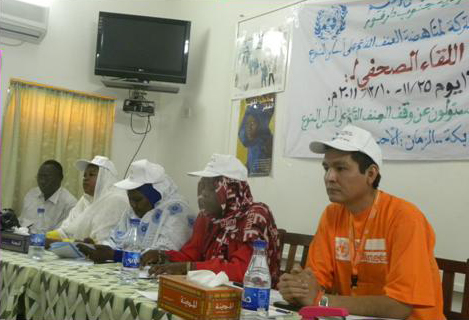 The dramas often depicted men confronting other men about the consequences of gender-based violence. This is a powerful method which created a high level of awareness, because of the taboo on this issue, especially among men.

On the theme No violence - Speak out - Protect, the 2011 campaign created a solidarity movement to raise awareness around gender-based violence and highlight the connections between women, violence, and human rights.

The campaign aims to ensure better protection for survivors of violence and calls for its elimination.

This was an example of how partnership for peace and development can multiply the impact of our work, said UN Volunteer Germán Robles Osuna from Mexico, the UNV Programme Officer with the UNV Field Unit in Khartoum Sudan.
We have to credit and thank the United Nations Populations Fund (UNFPA) for including volunteerism as a corner-stone for such an important campaign in the fight against gender-based violence, he said.

Germán promptly accepted UNFPAs invitation and collaborated in the campaign by providing technical assistance on its design.  He then mobilized more than 80 men and women from Nyala University in Nyala, South Darfur to participate in the campaign.

After attending workshops to prepare them to implement the activities, the Nyala University volunteers went out to local schools, markets and, under the security and protection of the United Nations - African Union Mission in Darfur (UNAMID), to the highly volatile camps for internally displaced persons (IDP) around the city.

They performed dramas and songs, held workshops and visited institutions to advocate for the protection of the victims and the persecution of the perpetrators.

The dramas often depicted men confronting other men about the consequences of gender-based violence. This is a powerful method which created a high level of awareness, because of the taboo on this issue, especially among men.
-- Germán Robles Osuna, UNV Programme Officer

The dramas portrayed that it was also risky for some men to challenge the authority of other men on gender-based violence. Nevertheless, fighting GBV must be done by men and women together, Germán continued,

Local volunteers chose the right combination of verbal and non-verbal communication techniques to make sure the intervention was accepted by the local population and authorities, he stated.  I think women were empowered by the message: GBV cannot be tolerated. Victims must speak out to the authorities to prosecute the perpetrators, he concluded.

More than 1000 women and men from several organizations paraded through the main streets of Nyala to speak out against gender-based violence.  At the end of the campaign, each volunteer was presented with a certificate of participation and expressions of thanks from local community leaders.

UN Volunteers documented the campaigns efforts through photo-stories and a video.