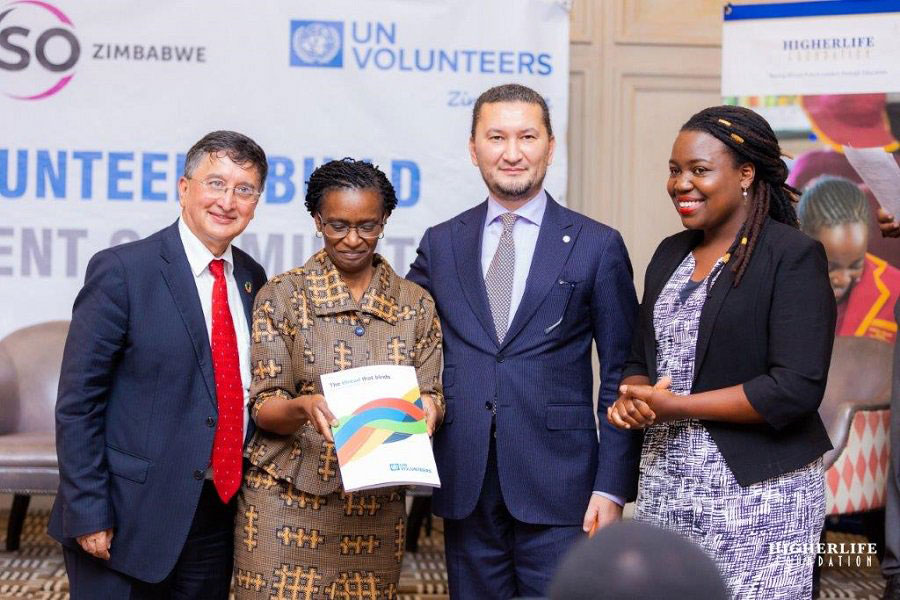 On 5th December, 2018, the UN Volunteers (UNV) programme launched the 2018 State of the World’s Volunteerism Report (SWVR 2018) in Harare, Zimbabwe, demonstrating how local volunteers across the region are strengthening their communities.   UNV Deputy Executive Coordinator, Mr. Toily Kurbanov launched the report and led a high-level panel of representatives from the Government of Zimbabwe, the HigherLife Foundation, VSO Zimbabwe, and civil society. The session addressed the report’s findings and discussed how volunteers build resilient communities in Africa.

The regional launch of the SWVR 2018 coincided with the International Volunteer Day 2018 (IVD 2018) Commemorations. The event was organized by the United Nations Volunteers (UNV) in Zimbabwe with support of Higherlife Foundation, VSO and other UNV’s key partners in Zimbabwe. It was preceded by a Youth Dialogue on volunteerism on 4 December facilitated by UNV Regional Manager, Mr. Njoya Tikum, and aimed at kick starting the discussions on the results and recommendations of the SWVR 2018, and the implications particilay for the youth in Africa.

Around 60 youth representatives from across Zimbabwe participated in Youth Dialogue and took time to reflect on volunteerism and its role in accelerating Africa's development. UNDP Zimbabwe Country Director, Mr. Georges Van Montfort opened the event by sharing on how volunteers are contributing to their communities while developing themselves.


During the discussions, it emerged that young people face the challenge of value for volunteerism, as their volunteer efforts were not being recognized as part of work experience when applying for jobs.

Dr Kennedy Mubaiwa, Chief Executive Officer of the Higherlife Foundation and Mrs. Tendai Munyokoveri, VSO Manager emphasided that VSO and Higherlife Foundation will continue valuing volunteering experiences in their recruitment. Dr. Kennedy added his idea that you cannot go to a community to give solutions, but you get there to be part of the solution.

The youth were urged to develop their professional brands through engaging more in volunteer activities, while the stakeholders present agreed to work with UNV and the Governments to further build volunteer systems across the region and promote the dignity of volunteerism.

At the main SWVR 2018 launch on 5 December, UNDP Zimbabwe Resident Coordinator Mr. Bishow Parajuli opened the forum by presenting on the role of volunteers during Cholera Outbreak in Zimbabwe that affected thousands of households and left a death toll of over 50 individuals. He praised the Higherlife Foundation for its efforts in mobilizing 4000 volunteers to fight the Cholera scourge. He also highlighted the immense value that volunteers contribute, not only for crisis response, but in mainstream development especially in achieving the 17 global development goals.

UNV Deputy Executive Director Mr. Toily Kurbanov, moderated the session and opened the event by introduced key findings of the SWVR 2018, highlighting that over 1 billion people volunteer globally, with most doing so informally, serving as the thread that binds and builds resilient communities. 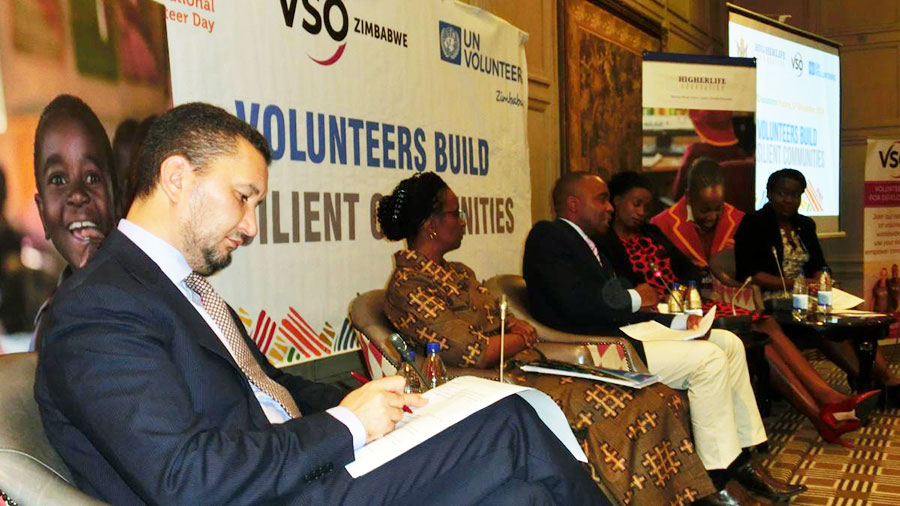 Permanent Secretary of the Ministry of Youth, Sports, Arts and Recreation, Dr Thokozile Chitepo highlighted that youth population in Zimbabwe is growing faster than employment rates, necessitating the urgent need to invest in volunteerism to promote skills development.

Dr Chitepo also emphasied the importance of youth volunteers in rural and communal areas and gave examples of how they have helped in rehabilitating bridges and building schools and clinics blocks across Zaimbabwe through her Ministry Programme that began in 2011.


The youth population in Zimbabwe is growing faster than employment rates, necessitating the urgent need to invest in volunteerism to promote skills development. --Dr Thokozile Chitepo, Permanent Secretary of the Ministry of Youth, Sports, Arts and Recreation, Zimbabwe

Dr Kennedy Mubaiwa of the Higherlife Foundation reminded participants that volunteerism must never be taken for granted and it is an avenue for development hence the need to sustain it in communities for accelerated development. He said, “Volunteering for me is leadership.”

Zimbabwe youth volunteer Ms. Brinah Senzere, also joined tha panel discussion, highlighting that development challenges are becoming more complex, inequality is rising and the Sustainable Development Goals (SDGs) are ambitious efforts to make sure no one is left behind. She therefore emphasied thatat the youth play significant role in achieving SDGs and volunteerism is an ideal channel for mobilizing urgently needed action.


Volunteering for me is much more than just a physical act. It's about what you give to communities, what you leave behind. --Brinah Senzereshe, Zimbabwean youth volunteer

The SWVR 2018 launch in Harare was attended by 130 participants and was streamed live on Facebook, gaining over 10, 000 social media impressions on UNV Zimbabwe and UNV East and Southern Africa Regional social media platforms.