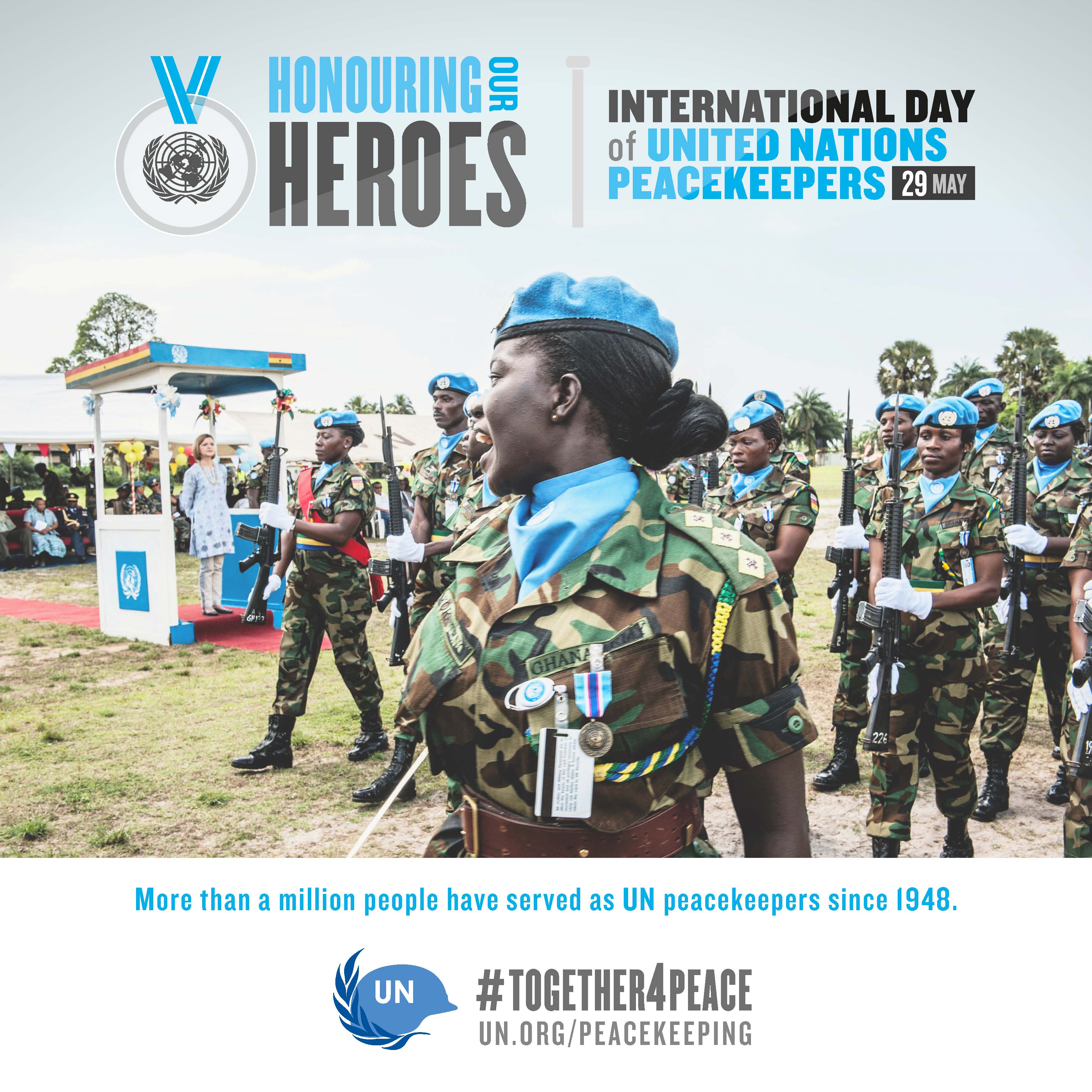 UNV Message for the International Day of UN Peacekeepers (2016)

The UN sets aside 29 May as the International Day of United Nations Peacekeepers to honour the memory of UN peacekeepers who have lost their lives in the cause of peace. Some 2,000 UN Volunteers are among the 18,000 international and national civilian personnel who tirelessly work with people and communities living at and behind the frontlines.

The UN sets aside 29 May as the International Day of United Nations Peacekeepers to honour the memory of UN peacekeepers who have lost their lives in the cause of peace. The Day is also to pay tribute to the estimated one million men and women who have served and continue to serve under the blue flag with professionalism, dedication and courage since the first UN peacekeeping mission was deployed in 1948.

Some 2,000 UN Volunteers are among the 18,000 international and national civilian personnel who tirelessly work with people and communities living at and behind the frontlines.

Today we honour six UN Volunteers among the 129 peacekeepers who lost their lives in 2015 in the line of duty as a result of acts of violence, accidents and disease: Louis Meya Kiziaba (Congo) and Mamiharison Solofo Rakotoson (Madagascar) served in the Central African Republic; Leticia Mattei (Germany) and Emmanuel Onyait (Uganda) served in South Sudan; Salisu Olawale (Nigeria) served in Liberia; and Gagan Punjabi (India) served in the Democratic Republic of the Congo.

The United Nations Volunteers (UNV) programme has been involved in peacekeeping since 1992 and has kept pace with newly emerging areas of peacekeeping such as environmental compliance and joint protection teams.

UNV is looking ahead to new ways of engaging UN Volunteers in peacekeeping in line with recent international developments and peace-related review processes that took place in 2015.

One new way to engage UN Volunteers would be for peace operations to integrate them into the community liaison efforts and deploy them more in all occupations to further develop local capacities as recommended by the Report of the High-level Independent Panel on Peace Operations on uniting our strengths for peace: politics, partnership and people published in June 2015, commonly known as the "HIPPO" report.

Capacity development is already a facet of many UNV peacekeeping assignments.

For example, at the Protection of Civilian (POC) site in Bor, South Sudan, a UNV Relief and Reintegration Specialist, two UNV Human Rights Officers and a UNV Civil Affairs Officer serve the United Nations Mission in the Republic of South Sudan (UNMISS), working along with military liaison officers, peacekeepers, and four UN Volunteers assigned to UNHCR and UNFPA.  As well as providing protection and early warning for civilians, the UN Volunteers carry out violence prevention trainings and income generation activities for the men, women and youth in POC sites.

At the United Nations Organization Stabilization Mission in the Democratic Republic of the Congo (MONUSCO), the 43 UN Volunteers serving the Aviation Section are the lynchpin to ensuring that the mission's flight operations (among the biggest of UN air operations) run smoothly.  With a lack of good roads in the country, air travel is essential to connect all the regions. MONUSCO flight operations are a vital means of transporting peacekeepers, civilian and military personnel, as well as UN-owned assets and other goods.

In addition to their logistical functions at MONUSCO, the UN Volunteers also have a capacity development role. Many of the UNV ramp managers, flight followers, air traffic controllers, among others in aviation support positions, work closely with national counterparts in and outside of the Mission.

In addition to handling cases and settling disputes, these volunteers train and sensitize civil society, including local authorities, the judicial apparatus, prison personnel, police stations, etc. on a variety of subjects from minimum human rights standards to sensitization as an element of office management.

For more than 70 years, UN peacekeeping has proven to be a legitimate, reliable and effective tool in facilitating the transition from conflict to peace. As peacekeeping continues to evolve, UN Volunteers are destined to play a larger role in national capacity development in the future.