Skip to main content
An exchange between UN Volunteers and the youth of Ambam in southern Cameroon.
UNV, 2021

Central Africa has been affected by security vulnerability and fragility since the 1990s as a result of recurrent crises and conflicts. This is particularly true in the border regions between Gabon, Cameroon and Chad. The UN Educational, Scientific and Cultural Organization (UNESCO) initiated a project called Les jeunes, Tisserands de la Paix (Young people, Weavers of Peace). This project is drawing on UN Volunteer talent to build a network of 1,800 young people, equipped with a conflict alert mechanism, who are serving as ambassadors of peace.

The project is implemented in partnership with the UN Office on Drugs and Crime (UNODC) and the United Nations Volunteers (UNV) programme and 11 UN Volunteers are actively involved in its execution in the three countries.

I am very proud of our young UN Volunteer colleagues for the enthusiasm and professionalism they display in exercising their duties. We are mentors to build peace in the minds of women and men; they quickly grasp the issues and have already been co-leading some initiatives. --Mrs Yvonne Matuturu, Programme Specialist Head of Sector, Coordinator of the Human and Social Sciences Programme in Central Africa and in charge of the project 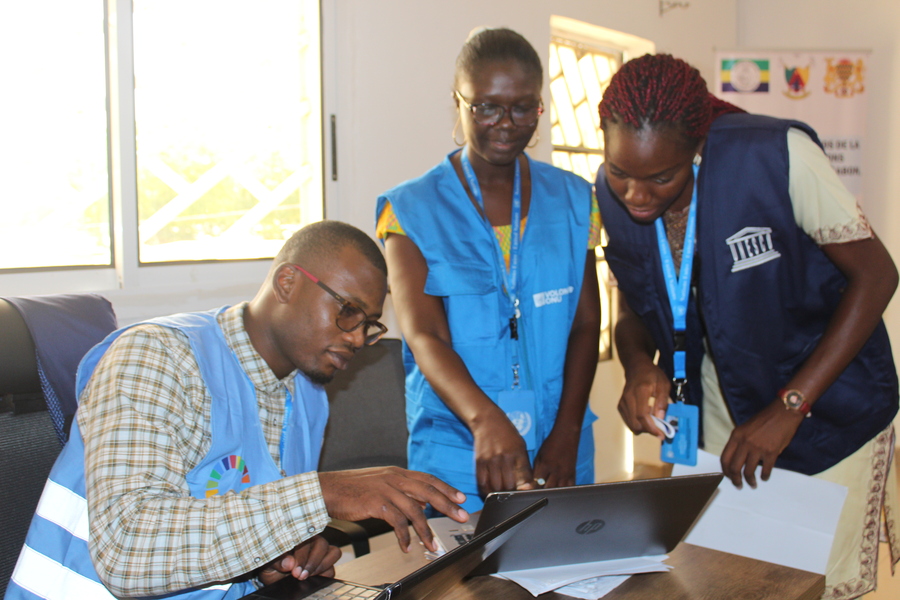 In Cameroon, the project operates in the South, North, and Far North regions. UN Volunteers have already conducted scoping missions, in collaboration with the Ministry of Youth Affairs and Civic Education, to introduce the project to local authorities and beneficiaries.

We mobilized youth associations in localities and mapped out more than 198 existing youth organizations. We also identified seven functional community radio stations with which we could collaborate in awareness campaigns. --Patrick Awona, UN Volunteer Training Officer with UNESCO, Cameroon

In addition, the project works on community resilience through the socio-economic empowerment of vulnerable populations, such as youth and women. Thus, the volunteers will also accompany 160 young people with social enterprise projects.

Through this project, we will be training youth on social entrepreneurship so as to help them develop income-generating activities and have a decent life. There is no peace without economic empowerment. It's a laudable initiative worth encouraging. I am ready to give my best to see the flag of UNESCO and UNV soar to greater heights. -- Marie Noel Verwiyi, UN Volunteer Training Officer with UNESCO, Cameroon

The UN Volunteers conduct the same activities in Gabon and Chad. They created a WhatsApp group to coordinate better among themselves and to share lessons and good practices from each country.

During the first phase, the UN Volunteers registered 807 potential "peace weavers" in Cameroon. They will finalize the selection process to enroll 900 youth and train them to become actors in recovery and social cohesion. Their ultimate aim is to strengthen the capacity of existing community-based prevention mechanisms.

The fact that we share the same age group as our targets makes it easier to communicate the impact of the project and the importance of youth engagement. We ensure the respect of ethnic diversity during the enrolment to leave no one behind. --Yves Thierry Zamgbala, UN Volunteer Training Officer with UNESCO, Cameroon