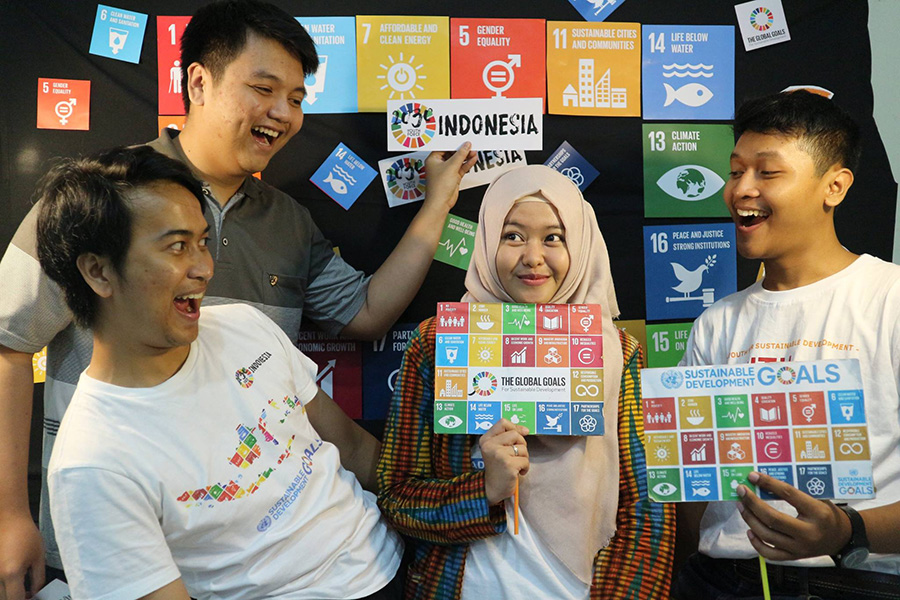 The 2030 Youth Force chapter of Indonesia sees the SDGs as the path towards an inclusive and peaceful society in Indonesia. (UNV, 2017)

It has been more than a year since the 2030 Youth Force was established by 19 young leaders from Asia and the Pacific, sparking a youth and volunteer-led movement that engages young people in the implementation of the Sustainable Development Goals (SDGs). Most recently, leaders from six countries gathered in Ho Chi Minh City, Vietnam, to celebrate their achievements, share best practices and plan for the future.

Since the ambitious group of young women and young men was brought together in June 2016, UNV and the United Nations Development Programme (UNDP) are supporting the network of youth and volunteers by facilitating knowledge-sharing and assisting young leaders to engage in regional and national initiatives. Throughout the initiative, UNDP and UNV have organized capacity-building webinars, arranged opportunities for young leaders to share their opinions in multi-stakeholder conferences at regional and country-level, and collaborated in online and offline activities.

The young leaders of the 2030 Youth Force are actively expanding the network, creating their own national chapters and raising awareness on how the SDGs relate to individuals and their communities, as well as how youth can contribute to achieving the Goals.

Today, the network consists of active chapters in six countries across the region and boasts over 6,000 members. Most of the chapters have sub-national or provincial branches that bring the initiative into communities to expand the work and build a network of networks. The 2030 Youth Force chapters have been supporting each other at the local, national and regional levels, exchanging best practices and knowledge, and building a momentum of youth engagement in the implementation of the SDGs in the region.

Many of the national chapters work in unique ways tailored to their context, meaning that participants have explored what works best in their local environment and are using creative means to reach and engage young people from their communities. During the two-day workshop held in October, the participants shared how they have successfully demonstrated adaptation and localization of the international SDG framework at a local and community level.

The 2030 Youth Force chapter in Indonesia, for example, focuses on SDG 16 Peace, Justice and Strong Institutions. Rizky Ashar Murdiono, one of the 19 co-founders of the 2030 Youth Force, described their commitment to supporting marginalized groups:

We encourage youth to promote the Global Goals with actions that lead to positive change towards an inclusive and peaceful society in Indonesia. We have invited young people from diverse groups, such as persons with disabilities, persons living with HIV, or the LGBT community to participate in all our activities.

In the Philippines, the 2030 Youth Force uses both offline and online activities to raise awareness among young Filipinos. Jules Guiang, another member of the original 19 young founders of the Youth Force, described their successes: “Starting with one Facebook post asking if anyone would be interested in working on the SDGs and their implementation, we are now partnering with the University of the Philippines to air an online youth show on the university’s online TV platform, TVUP. The show ‘2030’ will specifically focus on discussing sustainable development and the SDGs in the context of the Philippines.”

The On the Wheels SDG Caravan is another activity tailored to young people that will be launched soon, bringing the SDGs to key locations in the Philippines. It “will equip our young participants with important information about the SDGs, as well as present and incubate ideas and solutions to address local problems”, explains Jules.

While SDG 17 Partnerships for Implementation is one of the key goals of the 2030 Youth Force, with many chapters cooperating with governments, UN agencies and academic institutions, the 2030 Youth Force chapter in Viet Nam collaborates with local and international civil society organizations, as well as the private sector to build synergies.

Youth leader Xin Chao highlighted that since its foundation, the “2030 Youth Force in Viet Nam attracted a lot of attention from several local and international NGOs for mutual collaboration. We are currently a Communication Sponsor of ‘Narrow the Gap’ campaign by the LIN Center for Community Development, a local NGO in Vietnam.” She added, “We are also partnering with initiatives to building startup ecosystem in Vietnam in the context of the SDGs.

To further expand their engagements in their communities, many participants showed their interest in involving more youth volunteers strategically. In partnership with UNDP, UNV is proud to support these active young change makers’ initiatives, echoing the motto of the SDGs “leaving no one behind” with an emphasis on volunteering. While UNDP and UNV have provided the platform for them to establish the 2030 Youth Force, these young women and men are the ones who are taking on ownership and leadership of the movement. UNV was encouraged to continue collaborating with the 2030 Youth Force and supporting them to strengthen their capacities in inspiring their peer youth and other stakeholders.