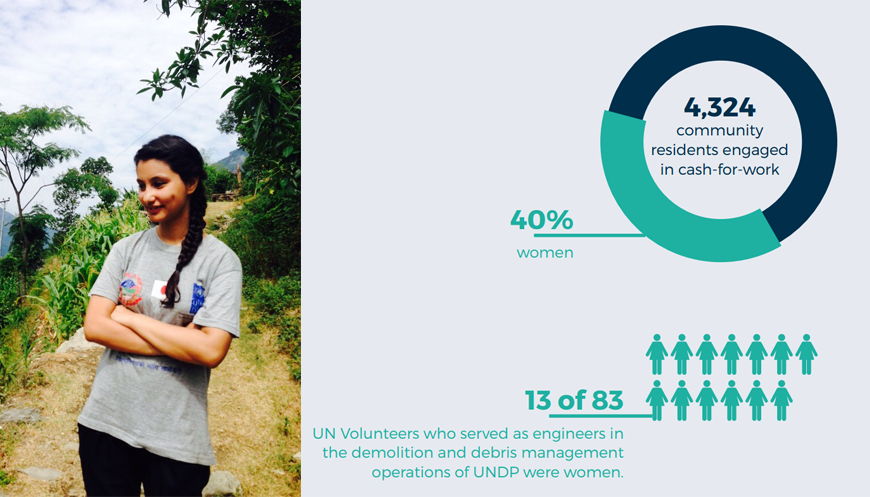 Anima Dhakal (left) is a UN Youth Volunteer civil engineer in Karthali, Sindhupalchowk, Nepal. The graphic comes from the report "Rebuilding with the Community after a Disaster: Volunteer Engagement in the 2015 Nepal Earthquake," launched in January 2017.

Immediately after the earthquake hit Nepal in April 2015, Anima Dhakal, a civil engineer, came to Karthali, Sindhupalchowk, to serve as a UN Youth Volunteer.

As one of the thirteen women who served as engineers in the demolition and debris management operations of the United Nations Development Programme (UNDP), Anima supported the earthquake-affected areas by using her skills in a traditionally male-dominated field.

“Engineering is for boys while girls are supposed to study management and work in banks,” she recalls her uncle as saying when she was still a student asking for career advice years ago.

Anima used to work as a site engineer for a water supply improvement project in Kathmandu Valley. When the earthquake hit Nepal, she was having a meeting with her teammates and was terrified as they began to feel the ground shaking and saw a nearby building collapse. The days that followed were even worse as news of people’s deaths, landslides and destroyed houses came, making her realize the extent of the damage. Anima felt the urge to help but she could not find the means to do so at first.

Anima then started working as a volunteer in the Nepal Engineering Association where she used her skills to assess damaged buildings in the Kathmandu Valley. While doing her work, she realized that the buildings she inspected were aesthetically sound but structurally weak to withstand earthquakes. People did not understand what good construction meant and the grave consequences that substandard construction materials could bring.

The personal satisfaction you obtain when an old woman thanks you for your work, or when you witness small children become excited to return to school, is inexplicable and priceless."

In May 2015, Anima joined UNV and was deployed to Karthali. Her parents were initially hesitant to let her go as her place of assignment was among those severely damaged by the calamity. As she was travelling from Kathmandu to Karthali, she saw landslide sites along the way and hundreds of buildings either partially damaged or completely destroyed.

Because news of powerful aftershocks was prevalent at the time Anima was afraid but, motivated by her desire to help the earthquake victims, she continued her journey just the same.

Upon arriving in Karthali, Anima could not find a single house left standing. People, meanwhile, were in a state of shock and were emotionally vulnerable. Born and raised in the city, she herself needed to adjust and put up with difficult living conditions and the very basic facilities available..

Anima was part of a group of UN Volunteers with engineering know-how who organized the demolition and debris management operations of UNDP in different earthquake-affected areas. She took part in the assessment of damaged structures and in the demolition of buildings that could no longer be salvaged and were thus unfit for habitation.

“The personal satisfaction you obtain when an old woman thanks you for your work, or when you witness small children become excited to return to school, is inexplicable and priceless. Serving as a volunteer after the earthquake was a tough experience but it was worth all the hard work. I consider the experience I gained from helping people after the earthquake one of the best in my life,” admits Anima, who adds that she feels proud to have been a UN Volunteer and will continue to do volunteer work in the future.