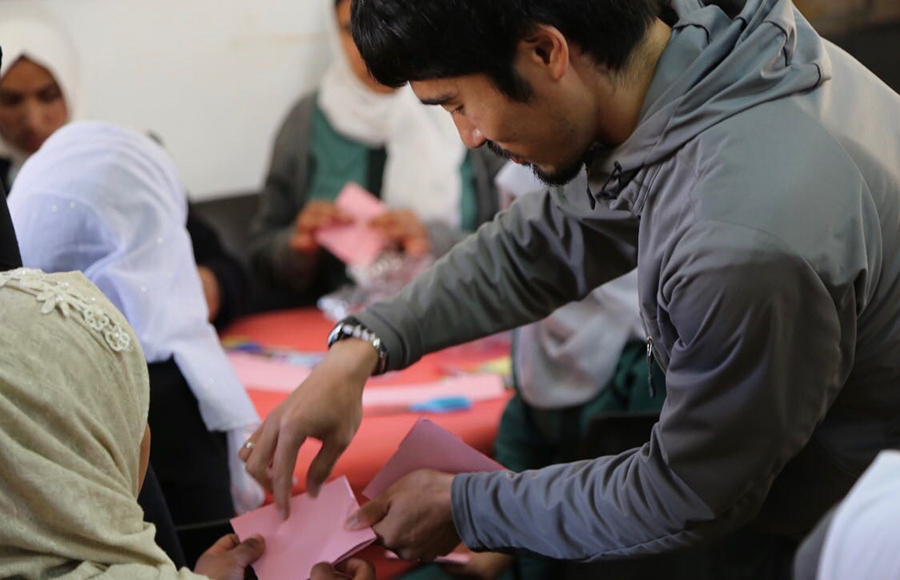 As part of the project to enhance social cohesion among Syrian refugees in Jordan, both Syrian refugeess and Jordanian hosts engaged in training sessions to increase their level of community engagement and employability.
(UNV, 2017)

The United Nations Development Programme (UNDP) has been working on mitigating the impact of the syrian refugee crisis on host communities and advancing social cohesion among refugees and hosts in Jordan since shortly after the war broke out in 2012. The United Nations Volunteers (UNV) programme has been supporting UNDP in sustaining socioeconomic stability and enhancing social cohesion between Syrian refugees and Jordanian host communities in targeted areas, while enabling Jordanians and refugees to pursue their human development aspirations.

At the onset of the Syrian refugee crisis in Jordan, an estimated 500,000 Syrian refugees resided outside the camps. Increased pressure on resources, infrastructure, education, health care, housing, essential services and increased competition for jobs out a strain on Jordanian host communities.  The rising demand for social services threatened social cohesion, as access and quality of service provision diminished under the heightened demand. This put a increasing strain on Jordanian host communities and left them feeling marginalized.

With tensions rising due to socio-economic challenges, compounded by the influx of Syrian refugees, a plan was put in place to lessen the burden in targeted areas where Jordanians and Syrians reside. UNDP launched the project "Mitigating the Impact of the Syrian Refugee Crisis in Jordanian Host Communities" in 2013, and the Community Cohesion Grant Mechanism was born in 2015. The latter aimed to instil social cohesion in targeted communities, channelling through 50 community-based organizations.

In line with national priorities, UNDP Jordan conducted a conflict assessment in the six Northern Governorates, to ascertain immediate societal needs in tense geographic areas. UN Volunteers have been supporting UNDP in working with local partners, including the local government, non-governmental and community-based organizations to deliver 50 social cohesion projects that were carefully selected. UNDP Jordan are responding to the urgent needs of Jordanian host communities, providing support to increase their absorption capacity and mitigate tensions between Syrian refugees and hosting communities, and UN Volunteers have been a tremendous support. Since 2015 nearly 1000 Syrians and Jordanians have benefitted from these activities. Mohammad Aklouk of the Idoun community-based organization in the Irbid Governorate has praised the partnership and results it has delivered.

The project has gone a long way to establishing trust and a genuine partnership between donors and community based organizations. This partnership with UNDP, with the support of UN volunteers, is the first time we get to implement a project from our own ideas, without having to deal with a median organization or imposed project ideas. --Mohammad Aklouk of the Idoun community-based organization, Irbid Governorate

With the help of UN Volunteers, the UNDP Social Cohesion project have made a significant impact in improving relations between refugees and citizens and state-society relations in northern Jordan. Pre-and post-project surveys conducted in 2017 show an expected 28,338 direct beneficiaries from the projects already, including 17,880 from Mafraq, 7,190 from Irbid and 3,268 from Zarqa. These beneficiaries will continue to be directly involved in awareness raising, capacity building, empowerment and community engagement actions to support cohesion and stability through volunteerism activities.

Through this project, and as a female, I have become more aware of the social issues at play and the importance of volunteerism in reducing social tension and easing conflict resolution in the community. --Yasmine Zaj, UN Volunteer 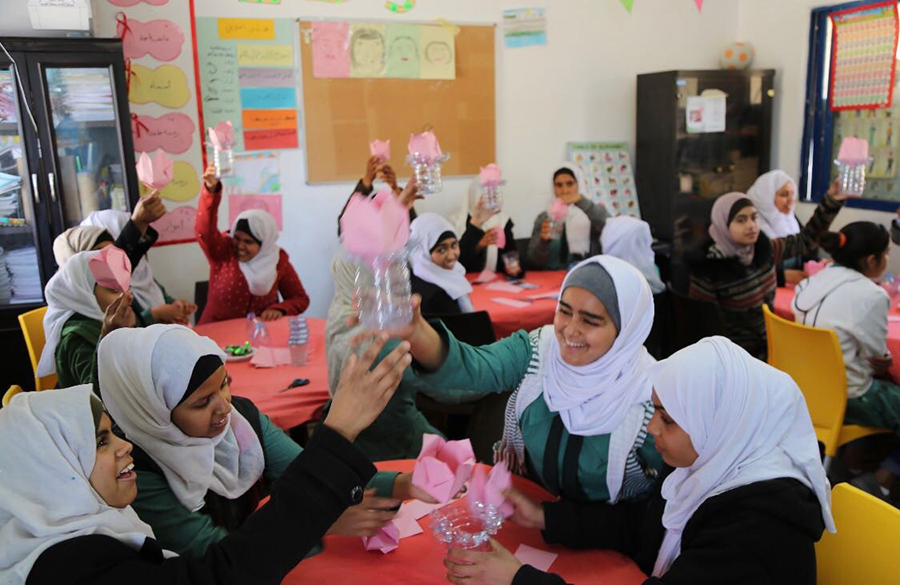 Beyond the dynamics of refugee and host, young Syrian and Jordanian women and girls take part in in training sessions to increase their level of community engagement, employability and social cohesion. (UNV, 2017)

While 30 of the 50 projects have been completed, extensive focus groups workshops, desk reviews, field visits and monthly reports received from CBOs, indicate 19,893 youth and women beneficiaries already demonstrate increased ability to engage in community activities and have acquired new skills and capacities that increased their livelihood standards and employability.

The UN Refugee Agency (UNHCR) reports that over 650,000 registered Syrian refugees have established themselves in Jordan, and now account for 13 per cent of Jordan’s population. Most of the Syrian refugees, around 80 per cent, have settled in the 6 Northern Governorates, areas known to experience poverty and unemployment rates higher than the rest of the country. In the Governorate of Mafraq, the absolute poverty rate is 19.2 per cent, while the national average is 14.4 per cent. Youth and women experience unemployment at around twice the rate of men.

Through this UNDP project, some 2,000 young people have undergone training, participated in empowerment and awareness raising programmes to increase their level of community engagement and employability with 850 Jordanian and Syrian women receiving training and support in the areas of home economics and productivity. They demonstrated improved competencies in homemade food products and artefacts and have been empowered to increase their income through commercial activities.

The process of visits, hand holding (through the helpdesk) and validation workshops were important to enhance our capacities, and to update our thinking and approach to community work. This has benefitted the effectiveness and execution of the project. --Hala Malhas of Dhulail community-based organization, Zarqa

UN Volunteer, Faris Deabes, said that a key outcome of the social cohesion projects has been the opportunity to influence others in the local community. “The project has increased my self-awareness and social skills in dealing with different targeted groups and backgrounds. It is indeed a great exposure and a tremendous life experience,” Faris said.

With the support of UN Volunteers placed within UNDP in Jordan, the remaining projects are expected to continue throughout 2018. They will continue to improve capacity amongst local governments and community-based organizations and advance social cohesion between refugees and host communities in northern Jordan.

The ongoing security and humanitarian crisis in Syria has resulted in a large displacement of refugees to neighbouring countries. Refugee arrivals in countries such as Jordan and Turkey have placed a significant strain on the ability of local authorities to provide resources that adequately support and address the needs of both groups. Consequently, resulting tensions between refugee groups and host communities has challenged the relationship with the State, resulting in a destabilized socio-economic environment. Follow UNV on Twitter and Facebook to see how UN Volunteers are serving with UN partners to address integration challenges and enhance social cohesion.

This article was prepared with the kind support of UN Online Volunteer Helen Maccan.