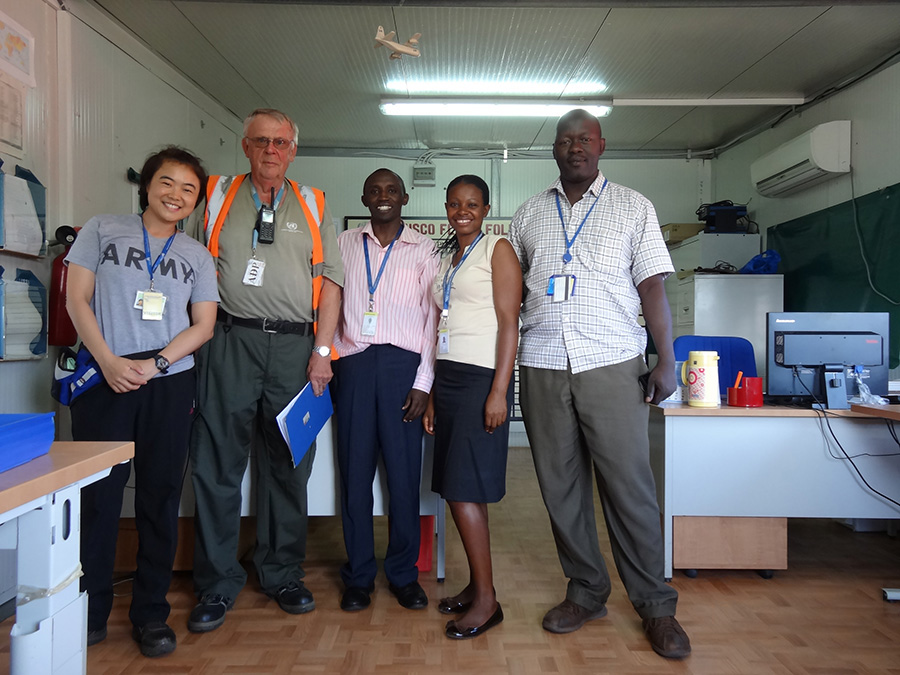 Green light from volunteer, we are ready for take-off

Serving as an international UN Volunteer in UN Peacekeeping Missions in Africa has been an overwhelmingly positive experience for me. I began my assignment with the UN Mission in the Central African Republic and Chad (MINURCAT) in 2010 and was seconded in 2011 to the Aviation Section in the Congo (MONUSCO). Assisted by the Movement Control Section (MOVCON) and contractors, I handle flights for several UN missions in the region.

Throughout my career, I always had the idea of one day joining the United Nations Volunteers (UNV). I was inspired by the many UN Volunteers I met during my years of service in Africa. While most were young, active individuals, there were also older ones like me now, with a strong vision of volunteerism. Fortunately, I was successful in my application and am blessed to now be in my second UNV assignment.

Like most people, my original intention was to retire once I reached the “appropriate age” but, when that day finally came, I realised I was determined to keep working. Joining the United Nations Volunteers was the obvious choice for me.

Based at Entebbe International Airport in Uganda, my principle duties today involve the coordination and management of passenger and cargo handling, refuelling, and the arrival turn-around and departure activities of UN aircraft, mainly for MONUSCO and the United Nations Mission in the Republic of South Sudan (UNMISS) missions. We occasionally also handle flights from other UN missions in Eastern and Central Africa.

My main work is to coordinate passenger and cargo flights, evacuation flights (MEDEVAC) and, unfortunately, flights bringing deceased UN staff. With my MOVCON colleagues and contactors, we assure that flights are timely handled and effectively turned around. Sometimes that means simultaneously handling several flights, which demands strict coordination ability with everyone working on the ramp (the area where aircraft park). We work with strict aviation safety and cost effectiveness criteria. The impact of my work may seem indirect to the UN’s goals of peacekeeping in the region, but it is a crucial part of fulfilling the mission mandate for UN missions in the region.

When a UNV offer of contract is received, applicants should be prepared to work anywhere in the world. In my case, it was Abeche, Chad, with the UN Mission in Central African Republic and Chad (MINURCAT). I had worked in administration and logistics in several African countries before, but the Republic of Chad was a new challenge for me. Being from Finland, I initially found the work very demanding because of the heat and dry desert conditions. Confident in my abilities and empowered by UNV, I pushed myself to do my best for the organization and for the people in need.

I was fortunate to meet many UN Volunteers in Abeche—the majority from Africa, but also some from South and Central America, Asia and even some from Europe, like me. Now, in my second mission, I am lucky to meet some of them again and the reunion is always cheerful—even some of whom I had personally encouraged to enrol in the UNV volunteer roster!

In choosing to volunteer, finances should not be the top concern. The crucial focus should be on assisting people in need by utilizing our individual skills and knowledge to aid the local population.

Volunteering is contributing to the mandate of the UN wherever we serve. It also requires us to take care of people, including peer UN Volunteers and, of course, ourselves. When volunteering, we are truly never alone; we are together with people—both local and foreign—and the interactions become deeply personal.

I consider my participation with UNV to be a truly unique experience and I invite anyone with an interest in volunteerism to join. UNV provides an excellent platform to further one’s experience in the international arena and allows people of different age, skill, ethnic and cultural background to work for the common good—providing humanitarian assistance and getting involved in the lives to those who need it the most. I may be past retirement age, but my work is not yet done!

Lauri Hukkanen (Finland) has a long record of service with UN peacekeeping operations:

United Nations Organization Stabilization Mission in the Democratic Republic of the Congo (MONUSCO), 2011