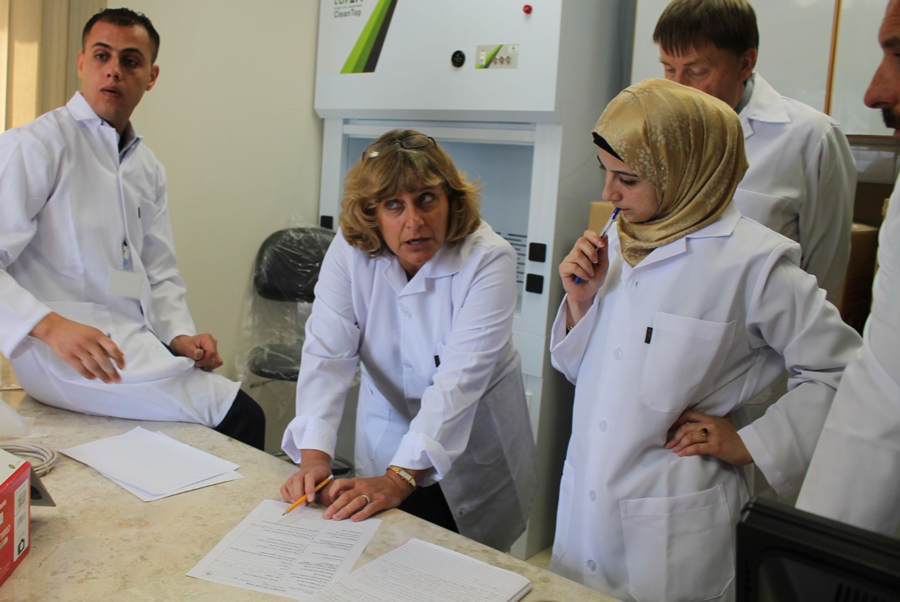 Justice for all: the experience of a UN Volunteer with the UN Office on Drugs and Crime

Equitable justice is made possible through effective investigation and the right to a fair trial. That is why the UN Office on Drugs and Crime (UNODC) supported the establishment of forensic services, including the creation of the first Palestinian Forensic Laboratory. Meet the UN Volunteer who worked at this project.

The idea that UN Volunteers work only in humanitarian or relief fields is far from the truth. Julie – a 28-year-old volunteer – has been supporting a UNODC project aimed at developing forensic services in Palestine.

Modern forensic science helps judges to solve cases providing solid evidence though the analysis of samples collected on the crime scene. That is why, in 2011, the UNODC launched the Forensic Services for the Palestinian National Authority – a project involving the Palestinian Ministers of Interior, Justice and Planning, Palestinian civil society organizations and supported by Global Affairs Canada

Julie, having studied International Relations and Arabic, worked briefly at the United Nations Relief and Works Agency (UNWRA) in 2012. In 2017, after consulting for a number of years, she started serving as Reporting and Project Development Officer with UNODC.

Her current assignment includes strengthening protections for the rights of victims of crime - particularly sexual and gender-based violence (SGBV) survivors. In this role, Julie is responsible for project proposals, fundraising, data collection, monitoring and managing various aspects of the programme. She credits her background in business intelligence as one of the valuable skills she uses to develop project proposals.

Serving as a UN Volunteer is about giving back to the community. But, keep in mind: the communities you serve are teaching you and giving you back at least as much as you are giving them, if not more. It is truly a humbling experience.” – Julie, UN Volunteer Reporting and Project Development Officer with UNODC, East Jerusalem, State of Palestine

"These services are critical in protecting the right to privacy and freedom from discrimination,” says Julie, “because sexual abuse survivors need access to private and confidential services, properly equipped and operated clinics, and well-trained forensic medical staff”.

Victims of crime and abuse, particularly women and children, need particular attention from forensic medical staff to identify evidence of a crime and avoid doing more harm. To facilitate this, the project has seen seven Palestinian doctors, both men and women, complete a four-year training programme at the University of Jordan and obtained a Higher Speciality Degree in Forensic Medicine.

As a result of traditional and potentially restrictive gender roles, some women who experience violence are afraid to press charges against their attackers. According to Dr Hafsa Salameh, the first female forensic doctor in Palestine, women often change their mind or testimony after being interviewed by a male practitioner – whereas they report feeling more confident with a female practitioner.

But the project’s greatest achievement is the opening of the first Palestinian Civil Police Forensic Science Laboratory in Ramallah in 2016. The first of its kind, it provides scientific analysis to support fair trials for all Palestinians living in the West Bank.

"One of my main tasks is to monitor the project and its implementation,” says Julie. Typical interactions include meeting with staff from Palestinian government agencies, the Forensic Science Laboratory, and forensic doctors – allowing her to assess results and outcomes.

Another critical element to Julie’s work is bringing together different groups that support the project:  UNODC regional experts, government officials, NGOs, doctors, and the local community.

The connections made between these groups improves the spread of information, having a direct impact on the awareness of the availability of forensic services – and their effectiveness in securing justice – especially for sexual abuse survivors.

This article was prepared with the kind support of UN Online Volunteer Leah De Hoet.