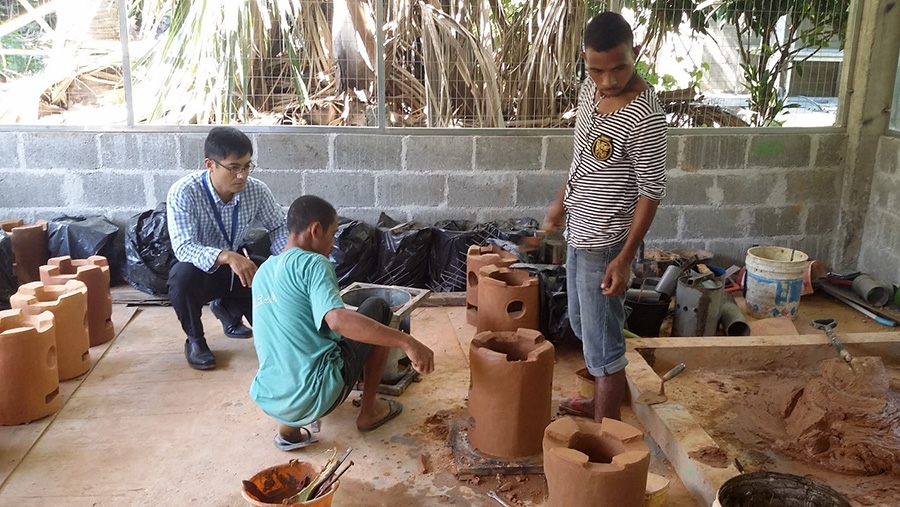 In Timor-Leste, UNV and the United Nations Development Programme (UNDP) are partnering on advancing environmental sustainability. One of the youngest countries in the world, Timor-Leste faces challenges raging from poverty and poor infrastructure to environmental degradation and climate change. Establishing and promoting a cook stove market mechanism helps improve Timor-Leste’s social business sector and entrepreneurship while reducing forest and land degradation.

The main causes of forest and land degradation in the country include deforestation, inappropriate agricultural practices, forest fires, over-grazing and demographic pressures. A survey conducted by the Japan International Cooperation Agency (JICA) reported that the annual deforestation rate between 2003 and 2010 had been 1.73 per cent. If this alarming trend were to persist, 17.3 per cent of the forest in the country would disappear by 2021 and all forests in Timor-Leste by 2071. In a country where 75 per cent of population lives in rural areas and over 70 per cent are employed in the agriculture and forestry sector, natural resources are of critical importance.

Since February 2016, international UN Volunteer Environmental Specialist Sung-gil Lee, has been serving with the Sustainable Development Unit of UNDP Timor-Leste. His assignment is sponsored by the Republic of Korea.

Sung-gil has been part of the Biomass Energy Promotion Project, with the support of the UNDP Global Environment Facility, the Government and other funding partners. The 4-year project aims to mitigate the national emission of greenhouse gases resulting from deforestation and the use of non-renewable biomass, using biomass energy resources in rural areas. It will assist Timor-Leste in increasing its access to clean bioenergy as well as creating employment through inclusive businesses. The beneficiaries are mostly vulnerable households with less income or disabled family members.

Energy poverty indeed is a major driver of Timor-Leste’s overall poverty cycle. Impacting many crosscutting issues, energy poverty generates poor health and environmental degradation as well as limiting economic growth where it is needed most. It also contributes to poor education and gender inequality. According to a 2010 census, 94.7 per cent of the Timorese population are relying on wood as primary cooking fuel and 83.3 per cent of households use open or no vent traditional cooking devices.

“Timorese people use traditional three-stone cook stoves which produce significant smoke and consume much firewood,” Sung-gil shares. “They not only worsen the health of women and children who are exposed to this indoor pollution and related diseases, but also accelerates forest degradation.”

In collaboration with local authorities and NGOs, Sung-gil and his team at UNDP are distributing fuel-efficient improved cook stoves and promoting bio-briquettes made of wastepaper, coffee husks, and organic residue.  In collaboration with local implementation partners, UNDP plans to distribute 20,000 improved cook stoves for households, schools and bakeries throughout the country.


The use of improved cook stoves is very important to save people’s lives and the environment. If we globally reach the target of 100 million households using improved cook stoves by 2020, billions of trees and thousands of lives will be saved. —Claudio Providas, UNDP Timor-Leste Country Director

Sung-gil shares, “My team has travelled through all 13 municipalities of Timor-Leste, organizing renewable energy law consultation meetings and promoting improved cook stoves. Every consultation had 60-70 participants.” He continues, “Our project also distributed cook stoves to households and schools. One day, I visited a school and met two kitchen staff women who prepare food for 471 students. I couldn’t believe when they showed me their kitchen with only a three-stone fire. At that point, I was convinced that I am doing a valuable job to improve local people’s lives.”

UNDP has been working with local NGOs to support improved cook stove manufacturers and facilitate market development. As a result, 27 businesses are producing and selling improved cook stoves, 22 schools are using these for school feeding programmes, as are 32 restaurants, four bakeries and 3,000 households. It is expected that 135,000 kg of firewood will be saved annually and 60-70 per cent of indoor air pollution emitted by stoves will be reduced.

By promoting the use of energy efficient and low carbon appliances, the project aims to create up to 20,000 improved cook stoves for households, schools, bakeries and restaurants. Establishing and promoting a cook stove market mechanism will also help improve Timor-Leste’s social business sector and entrepreneurship.

Our impact worldwide
Read more from UNDP about improved cook stoves in Timor-Leste
Read about how UNDP and UNV are promoting the use of improved cook stoves to prevent deforestation
Asia and the Pacific
Republic of Korea Timor-Leste UNDP deforestation
Sustainable Development Goal
SDG 7: Affordable and clean energy SDG 12: Responsible consumption and production SDG 13: Climate change