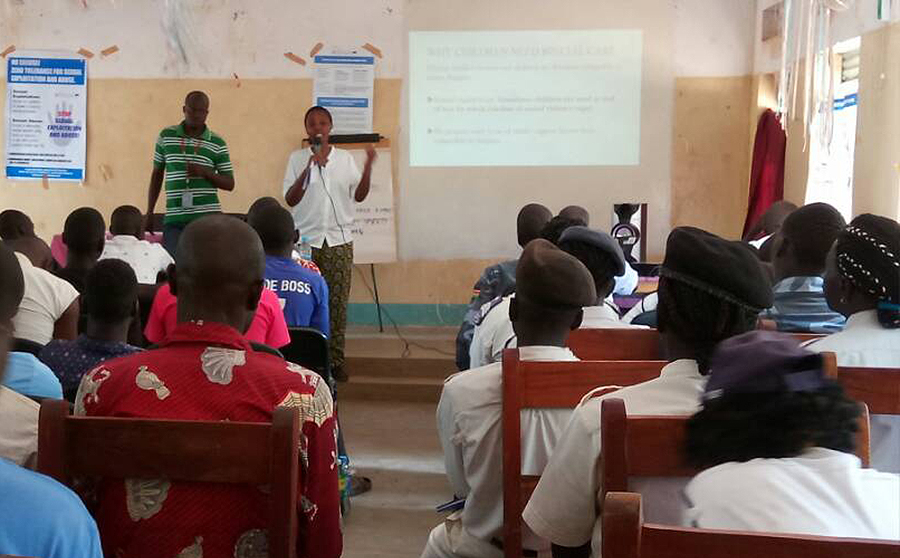 UN Volunteer Child Protection Officer Evelyn Imalingat serves with the United Nations Mission in South Sudan. In this article, she reflects on her role to monitor, verify and report on grave violations committed against children.

When I arrived in South Sudan in August 2017, I knew very little about the country, its people and culture. But I came with an open mind and absolute willingness to learn from the experience as I began my new role as a Child Protection Officer serving with the United Nations Mission in South Sudan in the Western Equatoria region.

In the past five years of conflict, it is children who have suffered the most. As a UN Volunteer Child Protection Officer, I witness firsthand the negative effects of living in the midst of armed conflict that linger on and touch all aspects of children’s lives. My role within the UNMISS Child Protection Unit is to monitor, verify and report on the six grave violations committed against children so that perpetrators may be held accountable. Advocacy and awareness raising on the rights of children is also an important mechanism used to reduce violations and promote peace and security.

I chose to become a UN Volunteer to help those who are vulnerable and cannot help themselves – children [...] I do not doubt my commitment as a UN Volunteer, because I believe that my little contribution is for a greater cause and will make a difference to the wellbeing of South Sudan’s children in the years to come. --UN Volunteer Evelyn Imalingat, UN Volunteer Child Protection Officer, South Sudan

One of the six grave violations that the Child Protection Unit addresses is the recruitment and use of children as soldiers. I was very surprised to find that it is not unusual to spot child recruits among various armed groups in South Sudan. Looking at their young faces, one could only imagine what they have experienced being born in such turbulent times or the kind of crimes they may have had to commit or suffer from as members of armed groups.

The term child soldier does not only refer to children who are trained to be combatants. Child soldiers can be porters, cooks, messengers, spies, or cleaners all working within the ranks of armed forces or groups. It is quite evident that many child soldiers are denied their right to have a happy, stable childhood, to feel loved and safe. Put simply, their right to “just be children” is often overshadowed by the struggle to survive within military confines.

I remember meeting the Governor of one of the States in Western Equatoria; he described how he had pardoned a child soldier linked to an armed opposition group. The Governor later discovered that before joining the group, the young boy had attained one of the highest marks in the Secondary Certification Exams in the State. This story really touched me, as it would have been unfortunate to lose such a brilliant mind to conflict related violence. This boy is but one of many Children Affected by Armed Forces or Groups (CAAF/Gs) who need guidance, protection and access to opportunities.

"Children Not Soldiers" is the motto strongly echoed by UN Mission in South Sudan. Last year, the Child Protection Unit in Yambio worked closely with partners and parties to conflict in the release and reintegration of over 700 registered child soldiers in Gbudue State. The objective of this project was to identify and release child soldiers from armed forces/groups and facilitate their reintegration back into their communities.

The former child soldiers receive reintegration support such as opportunities to access education, family tracing and reunification services, psychosocial assistance, social development skills and health screening. This project was the first of its kind in Western Equatoria.

It is very humbling to be part of such a life-changing peace and security initiative. I believe that Children Affected by Armed Forces or Groups (CAAF/Gs) who truly embrace the process of reformation have hope for a brighter future. So far UNMISS has supported the release of 311 of more than 700 child soldiers in Yambio in the first phase of the ongoing release and reintegration process. --Evelyn Imalingat

I chose to become a UN Volunteer to help those who are vulnerable and cannot help themselves – children. My role as a UNV in South Sudan has allowed me to go to many places, observe many things and accomplish many activities that I never envisioned myself doing.

Undeniably, when working in conflict zones, flexibility is a characteristic that you are forced to build and nurture from day one in the mission. In addition, your outlook on life changes as you learn to overcome your fears and accept to live one day at a time.

I do not doubt my commitment as a UN Volunteer because I believe that my little contribution is for a greater cause and will make a difference to the wellbeing of South Sudan’s children in the years to come. From the UN Mission in South Sudan, I take with me a life experience that I will cherish and be honored to share with others.