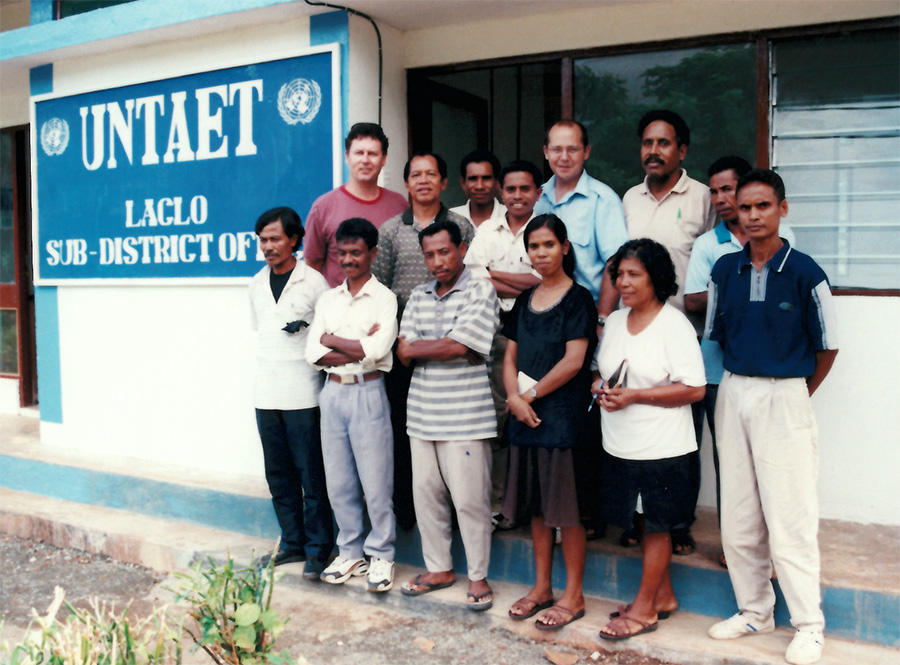 Serving as a UN Volunteer showed me the value of my skills, beyond the private sector

Back in 1999, I decided to apply to a UNV assignment. I was working in the private sector at the time, yet I knew I wanted to do more with my training as an economist. My mother thought I was a sort of “modern missionary”. It took her years to understand that what I was after was the opportunity for field experience and to challenge my misconceptions of development work. When I received the UNV offer for the peacekeeping mission in Timor-Leste, I immediately accepted and it was during this assignment that I met my future wife!

I arrived in a country where nearly all public infrastructure and most private houses were destroyed. Timor-Leste at that time was a country without a state—a nation where most civil servants had withdrawn. The UN, through the United Nations Transitional Administration in East Timor (UNTAET), was there to fill an empty space. As UN Volunteer District Field Officer, I was the face of the UN administration in the sub-district of Laclo. I was responsible for delivering basic public services. Over time, it quickly became apparent that there was much more to it than that.

Each UN Volunteer brings their own baggage of personal experience to their assignment. In my case, I was fortunate to be born to parents who pushed each of their five children to recognise privilege, to help those in need, to never hesitate to get our hands dirty, to always value everyone’s contribution and be open to learn from others. It was these values and lessons that proved critical throughout my UN Volunteer assignment.

The challenges and tasks of my UNV assignment were so overwhelming at first that I decided to ask the local leaders where they thought I should start. Their priorities were clear: the electricity, then schools, followed by health and women centres. I followed their lead and after years of being told what do to, my readiness to hear and act on their priorities brought their full community support to my work. Involving them in the projects proved essential to the success of our work. This was bottom up development in action.

Throughout these projects, I did everything imaginable from medical evacuations to vaccination campaigns, from irrigation to drinking water projects. I even received regular requests from the local priest to join the community at weddings, funerals, and other important events. As an economist, I was used to working with numbers and statistics but my experience as a UN Volunteer was different. Contrary to my previous work, all my reports and their statistics were about the places, persons and things I saw and did—the community in which I lived was always the backdrop of all my reports.

As an economist and a development practitioner, I am forced to obsessively think about project outcomes, SMART indicators, etc. My experience as a UN Volunteer taught me who it is I really work for—the community.

As the first national elections approached, I felt my work was done. The community did not think so. On the advice of local leaders and the priest, the new Timorese District Administrator requested to the UN that I continue to serve until after independence, which was approved. I stayed and helped organise the first democratic elections and coordinated the festivities for independence celebrations. On 20 May 2002, I proudly took a UN flag at Laclo to Manuel, my interpreter/translator and the father of the family where I lived, as a gift to mark the birth of his new country.

A few months later, now serving in the capital, Dili, with the Chief of Staff of the Mission, something unexpected happened—I met Diana from Sao Paulo, Brazil. She was also serving as a UN Volunteer. Little did I know that by joining UNV and travelling to Timor-Leste, I was about to receive a gift that lasts a lifetime. I smile when I think back at my time working in Laclo, being asked by my neighbours, “Why are you not married?” There was no more need to ask that question. Diana and I fell in love and Otto, our first son, was born on 28 November 2003, the day of Timor-Leste’s first declaration of independence in 1975.

After years of serving for the UN—and two more kids, Ari and Anna—I continuously remind myself to always contribute to the best of my knowledge and expertise and to learn from my mistakes. Even today, the lessons and experiences I gained as a UN Volunteer continue to guide my personal and professional life. Working for the UN is an honour, serving as a UN Volunteer is a privilege. I have been fortunate to have both in my life.

Mr. Jose M. Bendito (Spain) completed a Master in Political Economy of Development from SOAS-University of London and a Licenciatura in Urban and Regional Economics from UAM-Universidad Autonoma de Madrid. In the late 90s, he left a promising career with Nokia Telecommunications for one in development. Jose accepted a UN Volunteer assignment in Timor-Leste (2000-2003) and worked as Development Economist for UNDP Vietnam, Donor Relations Adviser at UNDP HQ, Policy Specialist for UNDP Cambodia, and Programme Specialist Innovation for the Volunteer Knowledge and Innovation Section of UNV HQ. He is currently Senior Technical Advisor for the National SDG Initiative with UNDP in Pakistan.