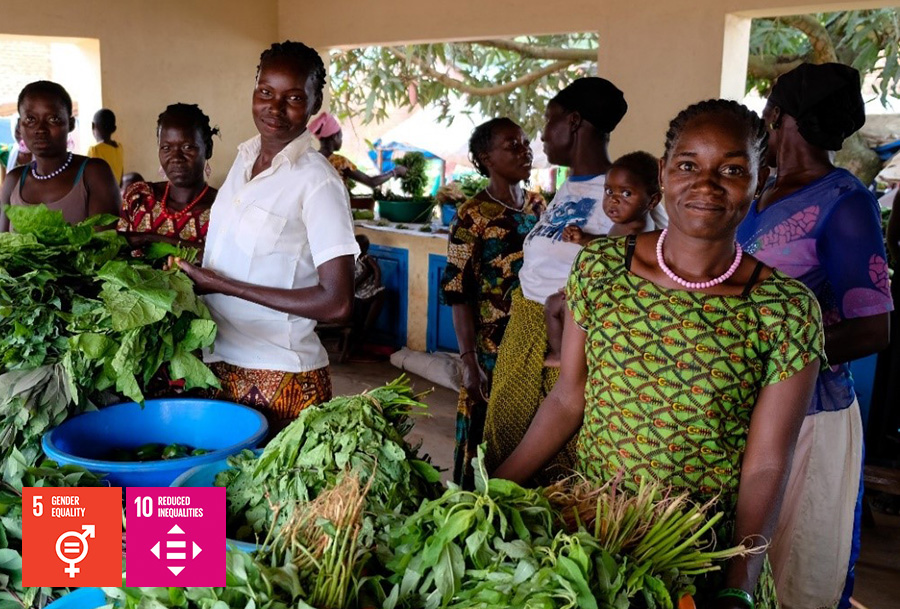 Women selling vegetables at Masia Market, Yambio, which was rehabilitated by UNDP and UN Women to enable women entrepreneurs to sell their fruits and vegetables with proper and hygienic facilities.
(UNDP, 2018)

Supporting the livelihoods of women in South Sudan with UNDP

South Sudan is the world’s youngest country, having become independent from Sudan in 2011 after decades of separatist conflict. Stella Vellendi (Finland), a 27-year-old UN Youth Volunteer with the United Nations Development Programme (UNDP) is helping to support recovery, resilience and livelihoods in three regions of the country.

In 2013, South Sudan entered a civil war – a conflict which continues till today. The impact of insecurity has had a profound impact on people. Poverty has worsened, from 44.7 per cent in 2011 to 65.9% in 2018. Female-headed households (48.6 per cent of all households in South Sudan) experience more severe depth of poverty owing to detrimental social norms, and limited access to education, productive assets and resources.

In terms of human development (which is measured by life expectancy, years of school and level of income), South Sudan currently ranks at 187 out of 189 countries on the UNDP’s Human Development Index (HDI), which is measured by a long and healthy life, access to knowledge, and a decent standard of living.

The country also has the highest proportion of out of school children in the world, which is a result of as well as a cause for illiteracy, poverty and inequality. The combination of conflict, lack of skills, and high gender inequality has led to high levels of poverty and hunger, which affects women and girls disproportionately.

Consequently, UNDP’s approach in South Sudan is: 'no peace without development, no development without peace'. Peace and development reinforce each other and their progress must be supported simultaneously.

Stella, whose UN Volunteer assignment is funded by the Government of Finland, joined UNDP in August 2018 as a Monitoring and Evaluation Officer in South Sudan for projects supporting recovery and resilience.

These projects entail delivering vocational and entrepreneurial training to unskilled young people, and providing them with nurturing environments for small and medium-sized businesses and resources like start-up kits.

For example, in the Southwestern town on Yambio, 30 kilometers from the border of Democratic Republic of the Congo, UNDP, in collaboration with UN Women and with funding from the Government of Japan, recently renovated and rehabilitated the Masia Market, so that women entrepreneurs selling fruits and vegetables would have proper and hygienic facilities for their businesses. 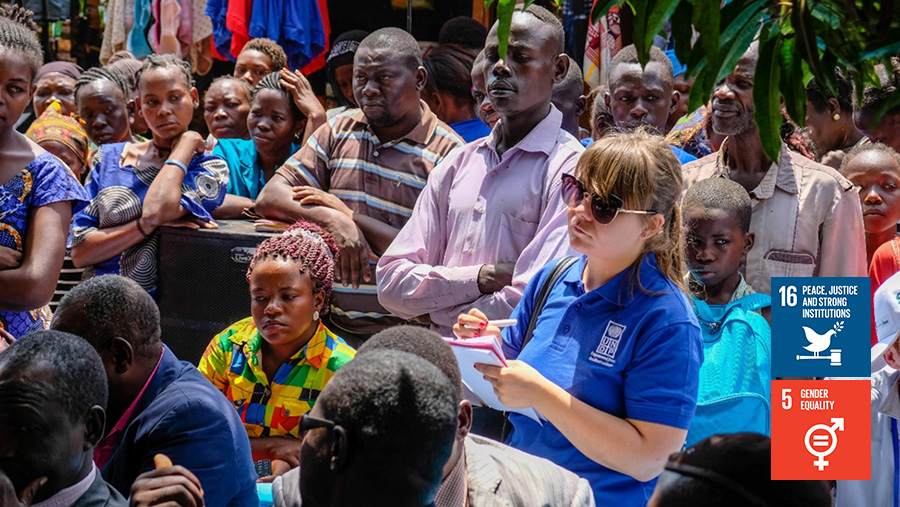 UN Volunteer Monitoring and Evaluation Officer Stella Vellendi at the ceremony to reveal the foundation stone of a borehole at Masia Market, Yambio. (UNDP, 2019)

In addition to being venues for business and opportunities for income and livelihood-creation, markets are important as they provide a spacewhere people can come together peacefully and have a sense of normalcy, even in situations of ongoing conflict.

At the Masia Market, the 88 women beneficiaries have also been provided with additional entrepreneurial and business skills so that they can provide better customer service, save for, invest in, and even expand their businesses.

On 10 September 2018, the rehabilitated market was officially handed over from UNDP and UN Women to the market community and the local government. One entrepreneuship trainee and recepient of a start-up kit, Nako, 27, was able to transform her small popcorn shop into a joint catering business which now employs six part-time workers and sells products in five locations.

Stella's contribution as a UN Youth Volunteer in South Sudan is therefore towards helping UNDP in constantly learning and improving, so that it can better its reach and support more vulnerable people in places where it is needed most, and thus leave no one behind.