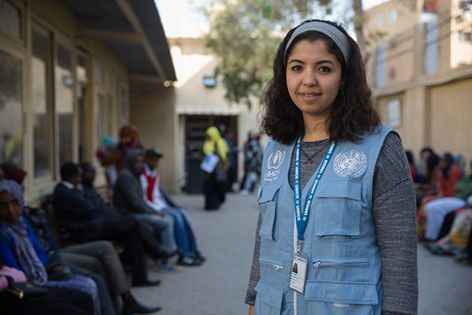 I was just a regular girl studying political science and statistics; little did I know that my volunteer engagement would define who I am. As a student, I volunteered for the UNDP committee that was part of the Model United Nations at my university.

Cairo, Egypt: I was just a regular girl studying political science and statistics; little did I know that my volunteer engagement would define who I am. As a student, I volunteered for the UNDP committee that was part of the Model United Nations at my university. While volunteering for this committee, I delivered food and aid to the under-privileged, and worked with UN Women to translate women-centric articles and news from Arabic to English. Then the next big thing came: I started working as an Education Assistant for UNHCR. I started providing support to Syrian refugees as part of a UNHCR project that was implemented by the Catholic Relief Services.

I started talking to them and listened to their stories of how they fled the war in Syria and reached Egypt. The coastal cities in the north of Egypt, Alexandria and Damietta are now home to most of the Syrian refugees. I started understanding the horrors of war, what it does, how it uproots you. I was amidst so many who were uprooted. From that point on, I made every effort to work with the education unit at the UNHCR and in April 2015 I got my chance to work as a National UN Volunteer with UNHCR. I was involved in determining if refugees could be eligible for educational grants. I met refugees and interviewed them. I listened to their education-related issues and problems. Simultaneously, I advocated with government to make education accessible to refugees. Besides researching educational grants for refugees, I managed the UNHCR's DAFI Scholarship set up by the German government.

DAFI was meant to help refugee teens complete their education. My duties included executing administrative tasks for the candidate pool, maintaining the database and finalizing the selection process. Interviewing the short-listed teens was by far my favourite assignment. Words cannot describe the eagerness of the young applicants wanting to complete their high school education. Among all the people I met, I will never forget one. He was younger to me in age, a school drop-out, who had been suffering from cancer for three years. But he stood tall, never faltered and survived the illness. After his recovery, he went back to school. Around the same time, I published a grant by the German Government for Syrian refugees living in Egypt to join Egyptian universities. It was a fully-funded grant that included tuition and boarding costs.

Receiving and screening applications, interviewing applicants and selecting the final candidate was my responsibility. I still hear him jumping with joy when he got my call that day. His emotions overwhelmed me too. He had been selected for the grant. It was as if he was given a new life, a second chance to move up in the world. He joined the Faculty of Engineering at Alexandria University. I met him yesterday after quite some time. He was a changed man. I felt immense happiness to see him happy. I did my part and my satisfaction is immeasurable. I'm Esraa and I've inspired change!