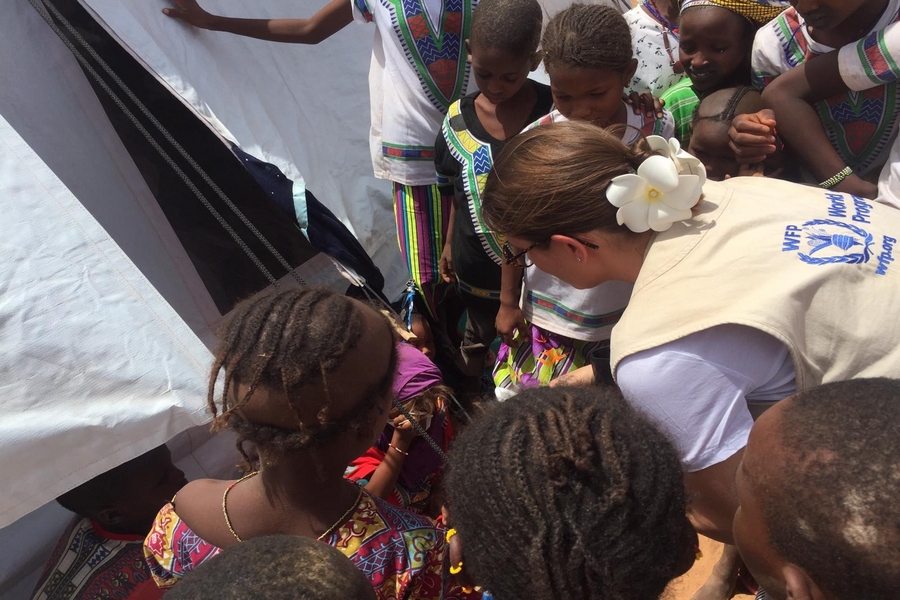 Sévaré, Mopti region, Mali. 7 May 2019. The thermometer shows 43 degrees Celsius. A new-born child wakes up wrapped in a loincloth, on a mat next to his mother inside a tent where a dozen women and children are resting. The baby was born the day before and will be named seven days later, according to custom. A short distance away, some children are energetically pounding grain.

Mariagiovanna Costa is a UN Volunteer of Italian nationality serving at the sub-office of the World Food Program (WFP) in the Mopti region. She visits the internally displaced families of the ‘CAN 2002 Socoura’ camp, named after the former training football stadium of the African Cup of Nations.

A food crisis is affecting the region of Mopti, and Mali as a whole, due to drought and conflict which have displaced more than 99,000 people across the country. In Mopti, nearly 180,000 people suffer from food insecurity and more than 46,000 are internally displaced.

Victims of armed attacks in the centre of the country, including one in Ogossagou on 23 March 2019, more and more families have had to leave their homes to find refuge and security in Mopti and Socoura. In April 2019, the Malian authorities – through the Regional Department of Social Economy and Development – opened the CAN 2002 camp in Socoura to host 89 internally displaced families, including more than 200 children, for whom WFP is providing food assistance. Although their stay in the camp is temporary, their return to the village is uncertain.

As Programme Officer for Nutrition and Seasonal Assistance to the Vulnerable, Mariagiovanna is responsible for the regional coordination of seasonal food assistance in the WFP Mopti sub-office. She manages the distribution of food and coupons to vulnerable people, and the prevention and treatment of moderate to acute malnutrition in collaboration with local authorities, UN agencies and partner non-governmental organizations.

The United Nations Volunteers (UNV) programme directly supports the most vulnerable through the deployment of qualified UN Volunteers who serve within communities at the front line of the response to humanitarian crises.