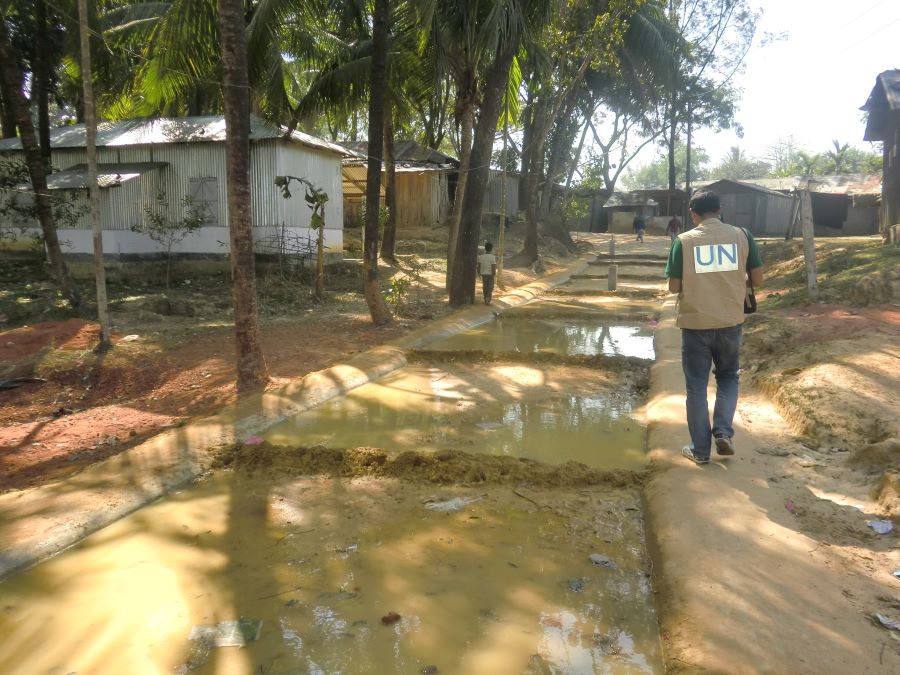 UN Volunteers work on infrastructure in the refugee camps in the Cox's Bazar region, Bangladesh.
(UNV)

Since 2018, UNV has partnered with the International Organization for Migration (IOM) in Bangladesh to provide humanitarian assistance to refugees coming into the Cox’s Bazar region. To date, four national UN Volunteers have been mobilized to work with IOM on site management for Rohingya refugees at the camp and surrounding areas.

In August 2017, the humanitarian situation in the Rakhine State of Myanmar triggered a large influx of Rohingya civilians to cross into Bangladesh to Cox's Bazar. Since then, an estimated 655,000 Rohingyas refugees have crossed into Bangladesh, increasing the total Rohingya population residing in the Cox's Bazar area to over 866,000. The speed and scale of the refugee influx has resulted in a critical humanitarian emergency that is being handled by UN agencies, other humanitarian partners and volunteers.

As part of its protection approach to humanitarian action, IOM has been providing emergency shelter, non-food provisions, water, sanitation and hygiene and site management; to both the refugees and the impacted communities in Bangladesh. IOM is committed to a holistic protection response to the crisis and ensures protection is mainstreamed across all sectors.

Currently, the Government of Bangladesh is working closely with IOM and other UN agencies to establish a new 2,000-acre refugee site in Cox’s Bazar. The Rohingya population began arriving at this new site before the infrastructure and services had been fully established. Now, however, site planners and engineers are working to provide access to roads and provide a layout that allows robust access and delivery of services to the site.

For this project, the UN Volunteers placed with IOM are assisting the engineering of the construction efforts. They are developing drainages, pathways, stairways, bridges and brick-paved roads and shelters. These facilities are constructed for refugees and vulnerable members of the host community in order to alleviate some of the hardship that they currently endure.

“Working for the UN was always a dream for me. Now, as a UN Volunteer, I am able to utilize my civil engineering background to make better and safer living conditions for the people that need it the most, ”  states Ifrekhar Hussaine, UN Volunteer for Site Development Operations Officer, IOM Bangladesh.

Through strong partnership, likes those of UNV and IOM in Bangladesh, UN Volunteers reach the ‘furthest left behind’ and provide support and assistance to the most vulnerable members of communities worldwide.