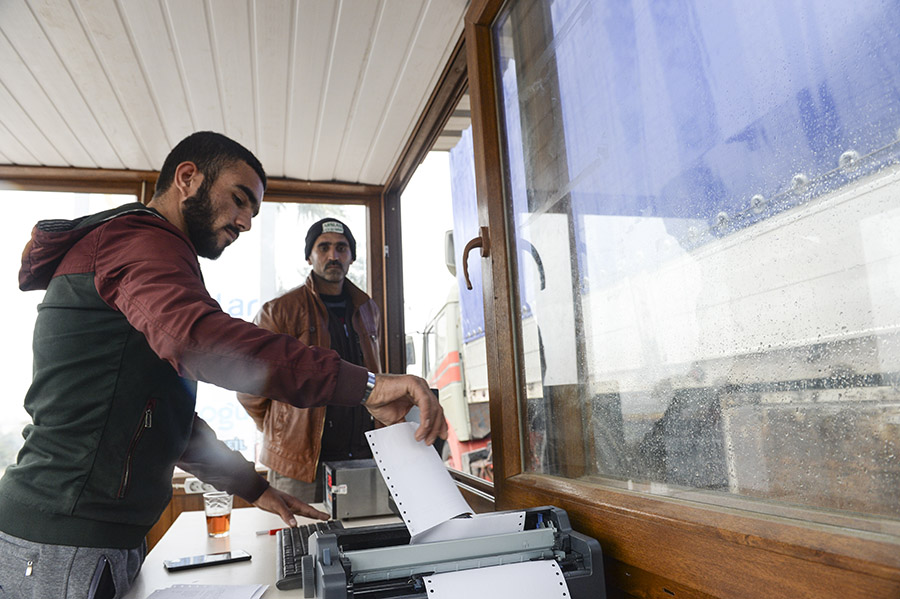 UN Volunteer Associate Monitoring Officers with the UNMM assure that the trucks going into Syria are carrying humanitarian supplies and nothing else. They compare aid cargos with consignments, liaise with the logistics officers of UN agencies and im-plementing partners, and actively seek information of United Nations-led cross-border movements. (LEVENT KULU, 2016)

The 2016 deployment of more than 400 international and national UN Volunteers to respond to the refugee and migrant influx in countries neighbouring Syria and across Europe is a clear example of UNV’s agility in responding to the Syria crisis.

The United Nations Volunteers (UNV) programme continues to demonstrate its ability to meet contemporary development and peace challenges.  In 2016, UNV’s response to the refugee and migrant influx showcased this flexibility and rapid action capabilities through the deployment of hundreds of UN Volunteers who support humanitarian and development initiatives benefiting Syrian refugees and their host communities.

Responding to the refugee and migrant influx in Europe

The refugee and migrant influx in Europe, caused primarily by protracted conflicts in Syria, Afghanistan, and Iraq, continued to intensify throughout 2015 and 2016. Instability in the region, particularly the armed conflict in Syria, triggered what is considered the worst humanitarian crisis since World War II.

The increasingly volatile refugee and migrant situation had direct impacts on UN partner entities’ ability to respond, particularly UNHCR. In response, UNV adopted ad hoc solutions to assign UN Volunteers in Europe for the first time, resulting in 31 UN Volunteers deployed in 2016, stationed in Ireland (2), Belgium (2), France (2), the Netherlands (2) and Greece (23). These volunteers were engaged as Associate Field Officers, Interpreters specializing in Kurdish-English or Arabic-English translation, and Associate Protection Officers.

The demand in Greece was particularly high in 2016 given the complex situation on the ground. As many arrivals headed for Greece through the Mediterranean route, the Greek government set up a network of temporary reception centers, and now permanent refugee camps. The conditions in these camps continue to be dismal, impacted by the overwhelming amount of arrivals, and inability to absorb funding. In this context, UN Volunteers Interpreters and Protection Officers were of particular relevance and had a notable impact on site.

In Greece, UN Volunteers assigned as Associate Field Officers (Protection) were deployed to the islands to support UNHCR emergency operations when the number of new arrivals was overwhelming. Similarly, UN Volunteers were sent to Calais in the north of France to assist in the dismantling of the so-called ‘Jungle’ camp, evacuating an estimated 6,000-8,000 migrants to reception centers across the country.

As one UNHCR staff member describes, “In 2016, UNHCR Brussels worked with UN Volunteers on reception and detention projects.” Adding,

Our UNV colleagues were highly skilled, and thanks to their dedication and competences, the UNHCR office in Brussels has been able to create new synergies and to develop great expertise on [reception and detention] issues.

“Alongside the UNHCR Urban Team, I helped many refugees who were stranded (living illegally in urban areas) in the center of Athens to have access to the asylum system in Greece by providing them with the correct information for registration… as a result, they were able to be recognized as refugees,” said international UN Volunteer, Mohammed Thabit.

International and National UN volunteers also support the social and economic resilience of refugees and host communities, which a priority in the context of the protracted crisis. In Lebanon, UN volunteers contribute to UNDP efforts to support vocational and technical trainings of young Lebanese from host communities in different sectors based on the market needs, and their access to paid internship programmes to address the negative consequences of the Syrian crisis on youth employment.

In northern Jordan, UN Volunteers contribute to sustaining host communities’ social and economic stability by supporting small enterprises, implementing cash for work projects and organizing vocational and entrepreneurship trainings. In Iraq, National “Community Solidarity Officer” Volunteers work with volunteer groups in the refugee camps and provide training on shelter rehabilitation, carpentry, painting and other skills that refugees can use immediately to improve their daily lives and livelihoods. In Turkey, UNV supports the Syrian and Turkish women’s social and economic integration through capacity building support to VIOs. The support includes creation of needs- and volunteer-based solutions to increase employability and eventually access to employment opportunities.

While it is primarily a national responsibility to protect and assist incoming refugees and migrants, UN agencies –including UNV– continue to respond to humanitarian crises where and when needed.