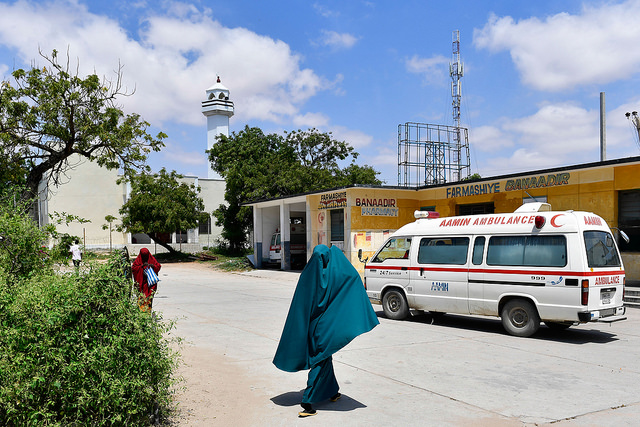 The Aamin Ambulance service, made up of 35 nurses, paramedics and drivers, along with a fleet of ten vehicles, rush to the bomb explosion scene to offer first aid to victims and ferry the injured to hospitals in Mogadishu in Somalia.

For the past ten years the volunteers have remained true to their calling as rescuers, offering emergency medical aid to those in need. Dr. Abdulkadir Abdirahman Adan, the founder of the 24-hour free ambulance service in Mogadishu, says he was motivated to start the voluntary service by the deplorable state of health services in the city.

When I came back to the country, there was a war going on and people were using wheelbarrows to get patients to hospitals. It led to deaths on the way to hospitals, and the persons carrying the patients getting very tired. That motivated me to respond and set up Aamin Ambulance services. It has helped to stop deaths,” Dr. Adan observes.

Dr. Adan, who still practices dentistry in Mogadishu, explains that his team face enormous challenges and physical risks as first responders to emergencies, and they witness traumatizing scenes.

“Sometimes soldiers fire at us or block us from accessing the scene to rescue someone,” he explains.

Although he is no stranger to blast sites in Mogadishu, Dr. Adan singles out the attack of 14 October 2017 at the city’s Zoobe junction, in which more than 300 civilians were killed, as the worst he has ever seen.

Dr. Adan is undeterred by the challenges he and his employees face and has great plans for Aamin ambulance services.

My dream is to reach every district, every village in the regions, everywhere in Somalia, so that my ambulances can reach there and serve people. In the next five to ten years, I can reach two to three regions,” Dr. Adan says.

The ambulance service founder adds that, with adequate support, he could have a footprint in every region of Somalia within the next ten years.