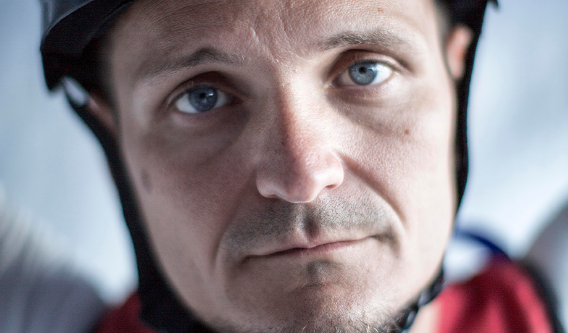 Alessandro Porro is an Italian volunteer of SOS MEDITERRANEE, an NGO that has been rescuing migrants on board of the Aquarius boat since 2015. In a powerful account, Alessandro shares his experience as a rescuer helping to save lives out at sea.

On the 15th of August 2017, the Aquarius took on board 112 people rescued by the Migrant Offshore Aid Station (MOAS), another NGO working in the Mediterranean. These 112 people were packed on a single inflatable boat, as Alessandro Porro recalls. Among them were women, children and wounded people, but for the most part they were young men.

“I am a migrant too. I left the Piémont for the Umbria region and then Toscana for the sake of love and for work. I spent a few years enjoying my life in Europe, both as a student and as a seasonal worker. I spent most of my life working on board of the ambulances of the Red Cross, first as a volunteer and then as a staff member. “I am a rescuer, this is what I am good at. It is not so much about courage, but about training and practice” explains Alessandro.

When he joined SOS MEDITERRANEE in 2016, Alessandro spent his first six weeks at sea near Tripoli in international waters. The team at the time was made up of 30 members –the maritime crew, the medical and Search and Rescue (SAR) teams. During this mission, more than 1,400 people were saved and brought back to Italy safely.


For Alessandro, European citizens are the eyes of Europe, but they don’t want to see. “We were labelled ‘humanitarian extremists’, but being a humanitarian worker is not a choice. It is neither a profession nor a charge." The term “extremist” is an exaggeration to Alessandro. “Us and other NGOs, we are rescue technicians”.

When they are at sea, rescuers save lives and collect stories. Sometimes they find corpses (August 3rd 2017), sometimes even babies with their umbilical cord attached (July 11th 2017). As soon as they feel safe, survivors open up about their journey, the powerful networks of smugglers who bought them and resold them. They talk about legal and illegal prisons in Libya, kidnapping and violence. As Alessandro explains, some of the migrants were taken as prisoners and forced to work. Once they paid their first ransom, they were re-sold to smugglers. It cost them a second ransom to find their way to the sea. The team of SOS Mediterranee have seen men with bullets in the abdomen, whip lashes on their back and burns on their skin.

As Alessandro discovered, the Aquarius is a “self-managed rescue University” made up of doctors, nurses, divers, firefighters and sailors who are only striving to hone their rescuing techniques, a chronometer in their hands. Nine seconds are required to take a person with a heart attack from the sea to the clinic. On the boat, even journalists put their cameras aside to give a hand. Volunteers from all over Europe, the US and Australia can be seen working alongside the medical team of Médecins sans Frontières. “All of them are calm, pragmatic, and tactful. None of them are heroes, they are just meticulous” explains Alessandro.


Sometimes there is a surreal silence as the team approaches a boat in distress, with 400 eyes looking at us in silence. Migrants don’t know if this encounter will mean salvation or a call back to hell. The person in charge of breaking this silence is the cultural mediator. One sole thing needs to be said: “you are now safe”.

Life jackets are first distributed, then people are taken dozens by dozens onto the Aquarius. They are given kits with water, food, blankets and clean clothes. Urgent medical cases – often resulting from physical violence – are taken to the clinic. Everyone sleeps on the deck, and after a few days people start to regain strength. As soon as the Italian coast appears, people start dancing and singing with the joy of shipwreck-survivors.

On the Aquarius, Alessandro and other crew members know that they might not be the solution to a problem that is much bigger than themselves. “We are a temporary band-aid solution filling the gap for the absence of a European sea rescue plan since the suspension of the Mare Nostrum operations of the Italian National Marine.” This band-aid solution is yet a crucial means to save lives and makes a real difference.


“In ten years, when we look back on these events, I will be able to say that I was on the right side of History,” Alessandro concludes.