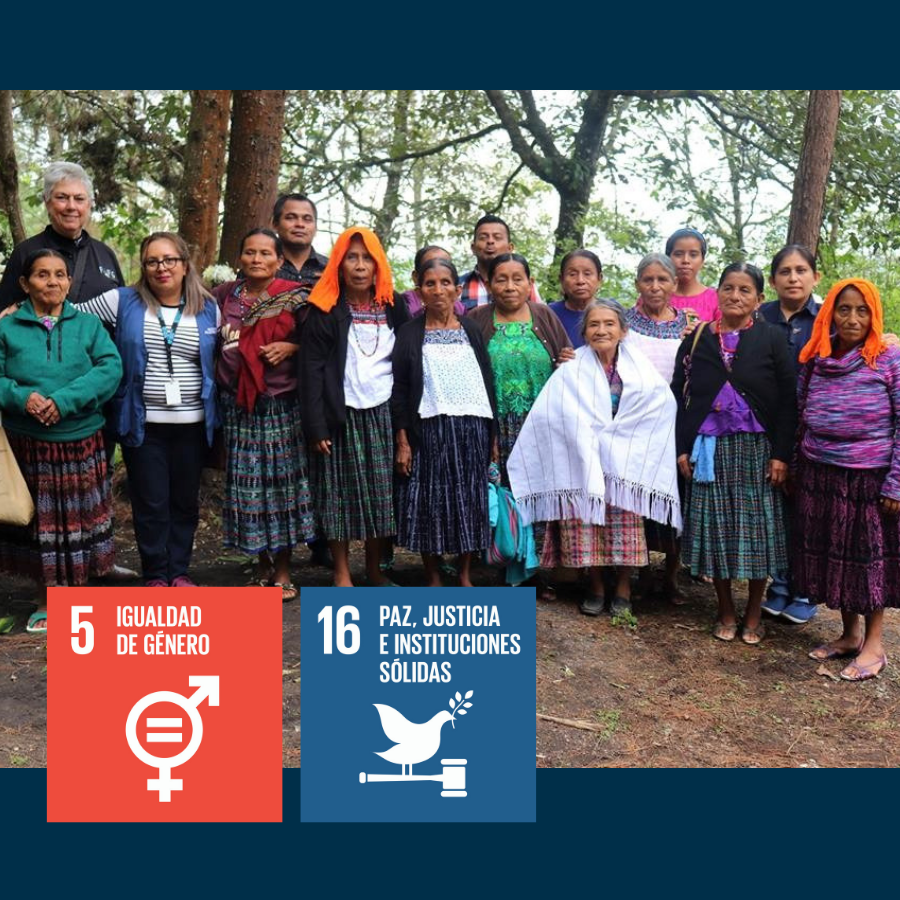 Women who serve as volunteers in indigenous communities of Guatemala, Panama and Ecuador, are leading the implementation of the 2030 Agenda. The creation of consensus and rules to protect biodiversity, the preservation of genetic resources and ancestral knowledge, and the empowerment of women survivors of sexual and gender-based violence are some of the prioritized issues in which volunteering generates impact at the local level.

The implementation of Agenda 2030 in Latin America and the Caribbean requires an intercultural approach that favors integration and inclusion, especially relevant for the establishment of joint work and dialogue with communities identified values and traditions of the vast and varied range of indigenous peoples that inhabit the region[1]. It is estimated that indigenous peoples currently represent around 14% of the total of people living in poverty and 17% of people living in conditions of extreme poverty in Latin America, despite constituting less than 8% of the population[2]. These conditions of poverty make it difficult for populations to access basic services, the justice system, spaces for political advocacy and even more, positions of popular election.

To reduce gaps and improve their living conditions, volunteering becomes relevant as a means of inclusion, mobilization and empowerment from local leaderships, respecting identity and valuing ancestral knowledge and customs. Ecuador, Panama and Guatemala already incorporate volunteering components, and advance in the protection of the environment and guarantee access to justice.

MOBILIZATION FOR THE PROTECTION OF BIODIVERSITY

Ecuador and Panama are two of the countries in the region in which the global UNDP-GEF project on Access to genetic resources and benefit-sharing (ABS) is implemented, together with the United Nations Volunteers programme. One of its objectives is the development of Community Biocultural Protocols as regulatory frameworks that protect both natural resources and ancestral knowledge, recommended within the Nagoya Protocol on access to genetic resources and fair distribution of the benefits derived from its use.


"50% of our collective-owned land is forest. We have many resources that attract the attention of researchers, entrepreneurs, scientists and students. We already have legal protection of our territory through a collective land title. Now we need to document our own oral rights so that those who want access to our practices and our resources do so with control, clear rules, within the framework of our principles as a town. These guides are to safeguard our traditional knowledge and to determine the benefits that will be obtained within the community”.   Sara Omi Casamá, UN National Volunteer for ABS UNDP-GEF in Panama.

In Panama, the dialogues and elaboration of the Community Biocultural Protocol within the community is the UN National Volunteer Sara Omi Casamá, member of the General Congress Emberá in Alto Bayano. Building consensus on the Protocol is very important for the Embera Ipeti Community, due to its history. After the construction of a hydroelectric dam on its former territories, the town was relocated on 3,194 hectares next to the Bayano Lake, where hundred families currently live. Forced to leave their land of origin had a direct impact in their way of life and community interactions.


"We have lost the traditional experience that we had with the forest before the construction of the dam. This process helped us analyzed our situation, how are we, what are we doing to take care of our knowledge, what is the role of young people, what are we looking for, what are we expecting. The elders call the protocol guides to ensure the survival of the community in time" Sara Omi Casamá, UN National Volunteer for ABS UNDP-GEF in Panama.

The process of elaborating this Community Biocultural Protocol is possible thanks to the alliance between the Embera Ipeti Community, the Ministry of Environment of the Republic of Panama and the United Nations through the UNDP-GEF Global ABS Project and the United Nations Volunteers programme. Sara Omi’s role as a volunteer in the elaboration and consensus-building process of the protocol is key, as she facilitates the creation of channels of dialogue with the traditional authority, uses the community’s cosmovision and language, and engages the community for the implementation and sustainability of the initiatives (watch Sara Omi's video here).

During the Permanent Forum of the United Nations for Indigenous Issues, held in New York on April 23, 2019, Sumak Bastidas, also a UN Volunteer for the ABS UNDP-GEF project in Ecuador, highlighted the importance of women's participation indigenous:


“Indigenous women are the fundamental guardians of the transmission and protection of traditional knowledge. For me, an indigenous woman and United Nations Volunteer, it is an honor to continue that legacy and to promote the care of the pachamama-biodiversity. The Nagoya Protocol values and protects indigenous peoples and local communities and empowers women and youth”. Sumak Bastidas, UN National Volunteer for ABS UNDP-GEF in Ecuador.

In Guatemala, volunteering has been the means to open spaces for the leading participation of indigenous women survivors of sexual and gender-based violence related to the conflict and post-conflict. Claudia Sigüenza, a National UN Volunteer at UN Women Guatemala, has worked to ensure the provision of comprehensive services to indigenous women.


“The participation of women in the training processes to strengthen their political impact succeeded in placing 7 of them in positions of popular election; also, as a result of the work with civil society organizations, 3 paradigmatic cases have been associated with the sexual violence suffered by women during and after the internal armed conflict". Claudia Sigüenza, National UN Volunteer at UN Women Guatemala.

The project, implemented in the departments of Alta Verapaz, Baja Verapaz and Quiché in Guatemala, accompanies women victims of violence in the facilitation of collective healing days with indigenous women in their own Mayan languages. There are also training programs for therapists with methodologies relevant to local culture and linguistics.


“This invaluable experience of being a national volunteer of the United Nations allowed me to meet and work hand in hand with indigenous women who have been protagonists of important changes for the defense of the human rights of women in Guatemala. I have also been able to contribute to the defense and promotion of their human rights and access to restorative justice”. Claudia Sigüenza, National UN Volunteer at UN Women Guatemala.