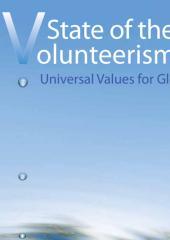 By suggesting how volunteerism can be taken forward, the 2011 State of the World's Volunteerism Report provides an alternative vision of a better society.

The SWVR promotes a better understanding of volunteerism. It demonstrates the universality, scope and reach of volunteerism along with new trends in the twenty-first century. The report examines important contributions in diverse fields such as sustainable livelihoods, social inclusion, social cohesion and disaster risk reduction.

By suggesting how volunteerism can be taken forward, the SWVR also provides an alternative vision of a better society.

The State of the World’s Volunteerism Report shows that, in most societies around the world, volunteers make significant contributions to economic and social development. Through their voluntary actions, millions of people are contributing to meeting the Millennium Development Goals (MDGs).

- An overview of the Report can be consulted here.